Numerous heated discussions are going on in the crypto community about the likes of EOS, Polkadot, and a host of others, being the so-called Ethereum killers. However, there is a cryptocurrency that has been created on the foundation of the platform that bears a lot of similarities with Ethereum, but instead of “killing” it, serves as a somewhat more interesting and efficient, though less popularized, continuation of by far the biggest ecosystem for decentralized applications and smart contracts. This cryptocurrency is called Holo (HOT), which is short for Holochain.

The fundamental value of Holo

Although this coin is currently placed on the 40th spot on Coinmarketcap, with a market capitalization of $131 million, it could be dubbed as one of the most fundamentally sound cryptocurrencies as it contains some unique technological solutions for such problems as the encumbered scalability, exorbitant electricity consumption, and huge volume of RAM space required to run the blockchain node that assures the network security.

What the Holo team did is that they used the Ethereum Network as the foundation (that’s why we called Holo the continuation of Ethereum) to build a fundamentally better platform that is based on a different philosophy, most notably, the Distributed Hash Table (DAT) algorithm instead of traditional PoW and PoS. Moreover, Holo allows for the development of dApps not only using Solidity, but also other programming languages, such as Java and Lisp.

This serves as a proof that Holochain is not a facade, behind which there is no substance. It is a superb solution for distributed apps, supply chains, P2P platforms, etc. Therefore, it’s fundamentals - not the hype - that has driven and will drive the price of HOT, so it is essential to understand them and follow any future developments in order to carry out profitable trading with this coin.

Before getting down to analyzing the prospects of HOT for the near future, it would be useful to take a quick glance at the price history of this coin. As we can see from the all-time chart below, HOT is not your usual altcoin that pumps once or twice and then lies flat for months. Since its listing on the exchanges, which happened in May 2018, Holo has been on a rollercoaster ride, which is a marvelous feat for swing trading. 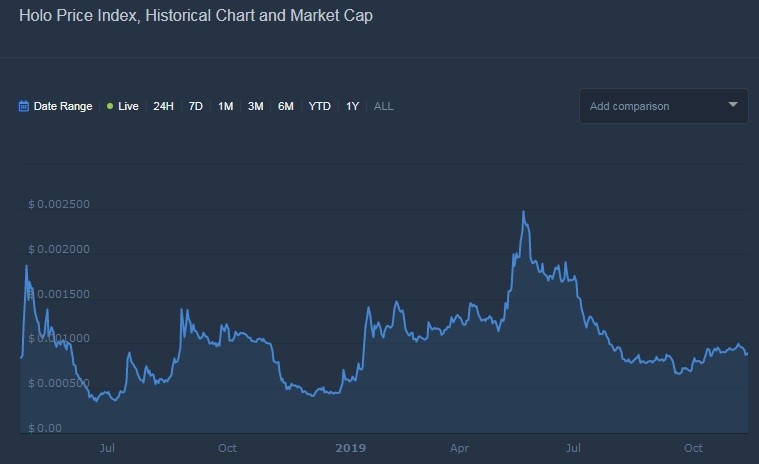 By the way, HOT had reached its all-time high of $0.025 quiet recently, in May of this year, which means that it has the potential to go much higher with the commencement of the fully-fledged bull market. 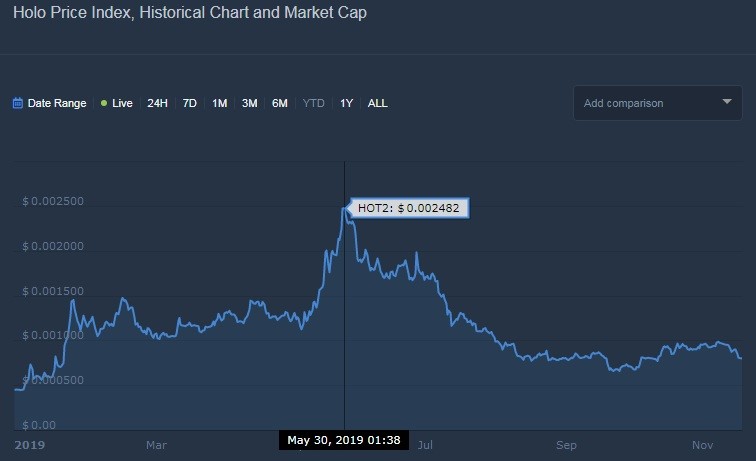 During the first two weeks of November, HOT has been moving steadily between the support at $0.0009 and the resistance at $0.001, but then it followed the suit of the entire crypto market and crashed to the current position at around $0.0008. 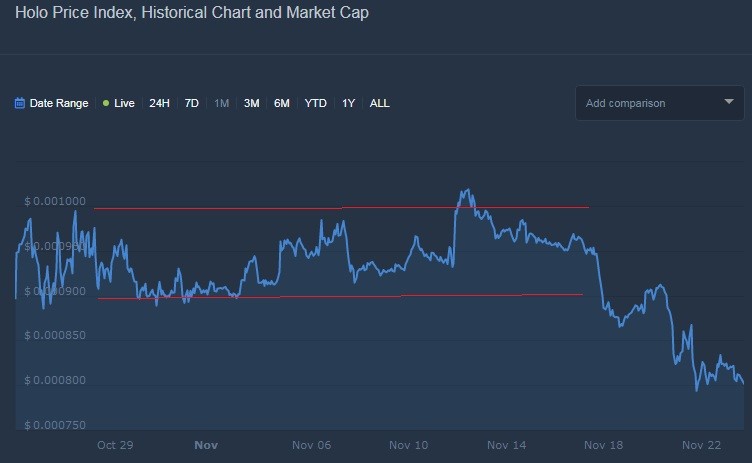 It is evident that over the next couple of weeks, HOT will keep consolidating at the new level of resistance, though some technical indicators suggest that the price might even go a bit lower. Therefore, holding or selling, with the intention to stock up on more HOT once the price dips again, looks justified at this point. 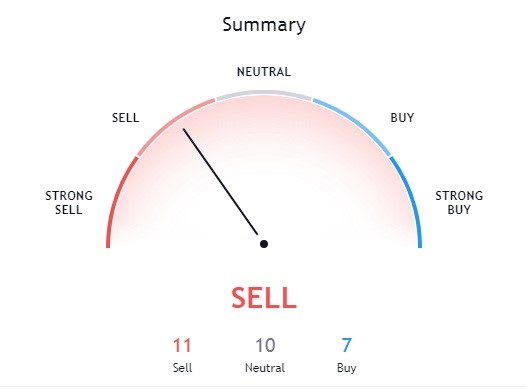 Holo had already showcased 75.95% gains this year, but it still holds immense potential for going to the upside, so traders should be careful not to miss the trend reversal, and with it, even bigger profits.