Even though Holo (HOT) doesn’t sit high in the global rankings - it is currently located just below the top 50 on Coinmarketcap - the project behind it called Holochain indeed offers some very interesting fundamentals.

In short, Holo helps create an even more decentralized and independent Internet by incorporating an agent-centric consensus protocol that provides for better scalability and transaction processing time compared to the likes of Bitcoin, Litecoin, and a host of other cryptocurrencies. However, Holochain is a shining example of a blockchain project that provides a useful and applicable solution but issues a cryptocurrency that doesn’t enjoy that much traction.

As mentioned, HOT is presently ranked 51st, just below Synthetix Network Token and TrueUSD, with the overall market capitalization of $136 million, which is insufficient for Holochain to become an influential player in the crypto space, at least in the foreseeable future. However, the average daily trading volume of Holo is relatively high, standing at $13 million as of the time of writing.

As for the recent gains, HOT has been doing rather well in that department, showcasing a double-digit price increase within both a month and a week - 22% and 26%, respectively. That is, certainly, not the most impressive performance of all, but perhaps the unfolding altseason, or at least the hints at it, could provide for an even higher price increase of Holo.

It must be noted that HOT is probably not the best choice for holding as it had decreased in value by 24% last year and provided only a 14.6% return on investment since its emergence in 2018. Therefore, an in-and-out trading strategy could be deemed as the most efficient when dealing with HOT/USDT or other cryptocurrency pairs.

Holo begins to uprise on the charts

The 51st coin obviously doesn’t belong to the cohort of hardest gainers, so it is important for traders not to overestimate its price action. Although the weekly HOT/USDT chart instills hope in further price increase since in it presently in the process of forming an abandoned baby pattern, with this week’s price action constituting the confirmation candle. 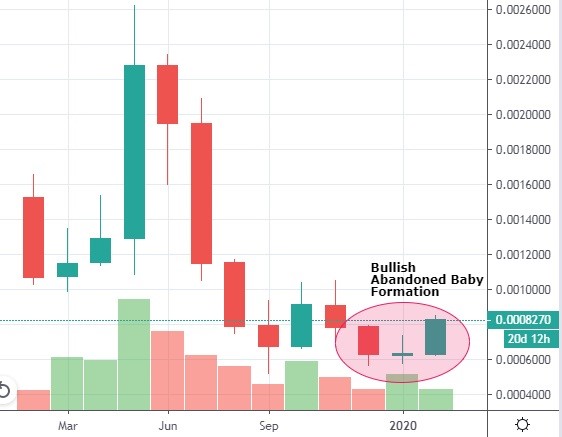 The expectations regarding Holo shouldn’t be running too high as the coin is yet to endure strong resistance since bottoming out, which should be met at the level of $0.001. Once it does, and subsequently breaches it, we could see the emergence of a fully-fledged uptrend.

The weekly chart shows Holo just beginning to break through a descending triangle, with the breaking point being at $0.00075. 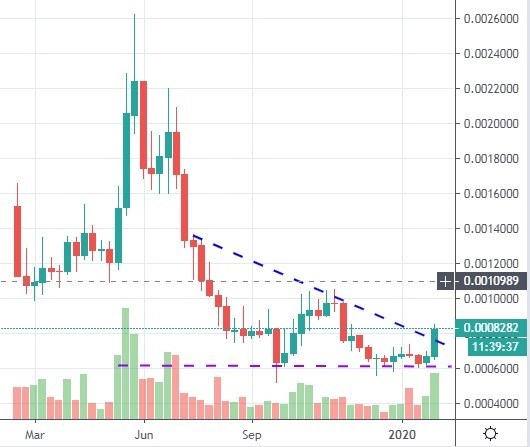 Obviously, we would need to see it go past traders’ remorse and provide a confirmation candle to convince traders to enter long positions, with the price target at $0.0012 or even higher. 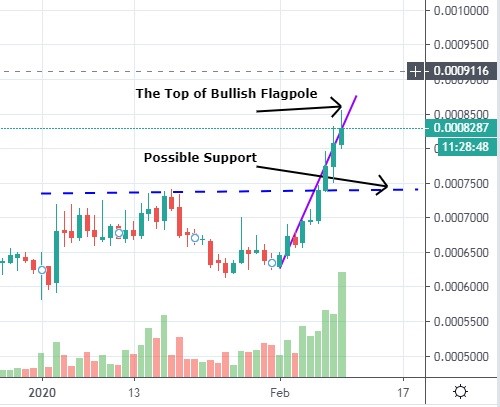 The situation on the daily chart looks promising as the coin is about to finalize the formation of a bullish flagpole, which should be followed by a healthy retracement, possibly to the level of $0.00075. However, judging by the heaviness of the current trading volume, the end of the flagpole could be extended to $0.0009, though it also means that the retracement would also go slightly deeper.