It is indeed unfortunate that the whole situation with coronavirus and the overarching crash of the real-world market has clearly shown that cryptocurrencies are far from being the safe-haven assets that traders, investors, and common folks alike could revert to in the time of economic instability. Instead, the unprecedented dump of Bitcoin, and Cosmos along with it, showed that the overwhelming majority of people still perceive crypto as a highly risky instrument that has to be abandoned for cash or other assets in the times of great turmoil. No wonder that Cosmos, as well as the rest of the market, from top to bottom, lost all those gains from the first month and a half of the year.

Cosmos, for instance, dipped far below its January positions, having decreased in value by as many as 80% from this year’s highs at $5.3. It’s certainly not the death of ATOM, and the cryptocurrency market in general, but this situation distinctively shows how susceptible crypto has become to global hysteria that is raging nowadays. Nevertheless, disciplined traders have to accept this situation, make the corresponding conclusion, and elaborate the appropriate tactics for these market conditions.

What to expect from Cosmos after a massive dump

The most obvious conclusion that can be made from the ongoing occurrences on the cryptocurrency markets is that the bears are reigning supreme right now, so traders should literally scratch out the words “long position” from their vocabularies for the time being. The coming weeks, or even months, will be all about selling, shorting, and price falls. With that being noted, let’s take a closer look at the price action of ATOM and analyze it with the utmost precision.

The day traders who read this article will be most interested in the situation that unfolds in the 15-minute time frame. Here we can see the ongoing consolidation which the market needed badly after the initial shock therapy that it received on March 12. 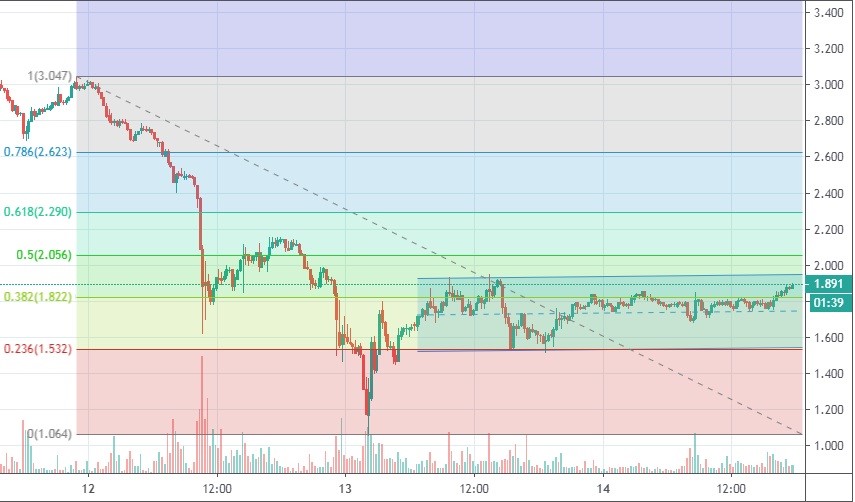 But even after Cosmos has taken a breather, the price persisted in sliding downward, only at a much slower rate. However, given the news about the US government injecting yet another huge dose of liquidity into the traditional markets in an effort to halt the tsunami of panic sales, we can expect the cryptocurrency market, including ATOM, to react in a positive manner by performing at least a partial recovery, which should take the full effect after the price breaks through the sideways trading channel to the upside, subsequently reaching the 0.5 Fibonacci level or $2, with the top price target being $2.3.

Moving on to the hourly chart, it shows that Cosmos has clearly entered a very tight ascending wedge, where it should stay for a while, given that the next wave of bearish pressure doesn’t occur soon. 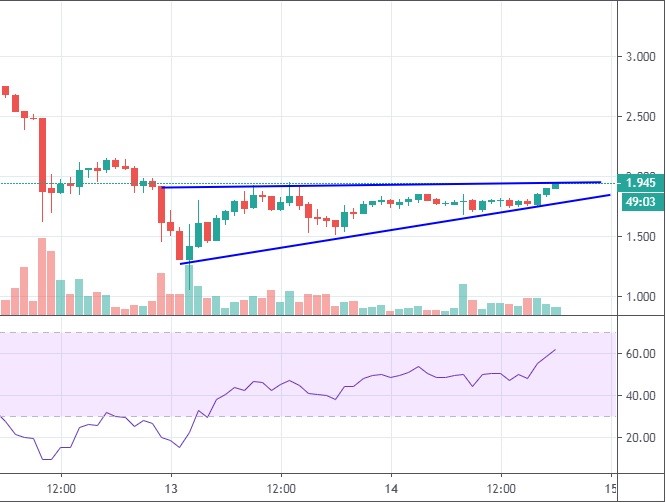 The price is now kissing the upper channel line being supported by the substantial trading volume, but the fact that the RSI is already on the brink of reaching the overbought area signifies the approaching retracement, presumably to $1.46. 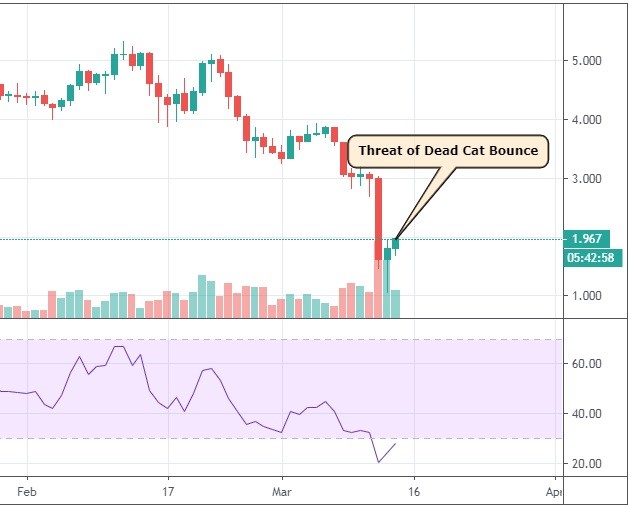 The daily chart reveals that ATOM is making an attempt to bounce back after the price dump, which was pretty horrific for this coin as it lost 65% to 68% on the day, stopped by pennies from reaching $1. However, traders shouldn’t get overly optimistic about this recovery as it could constitute the fragment of the dead cat bounce, after which we could be ATOM trading below $1.