Hardly anyone is going to argue the notion that the cryptocurrency market moves in sync with the price action of Bitcoin. Indeed, there are certain periods when altcoins show slightly better gains than the “Daddy,” but in general, the smaller fish goes where the whale swims.

However, as in practically any other area of life, there are exceptions that only prove the rule. It means that there are cryptocurrencies that aren’t totally dependent on the movements of Bitcoin.

According to the 2019 Annual Crypto Correlation Review, published recently by the Binance Research Lab, Cosmos (ATOM) was recognized as one of the three cryptographic currencies that are least correlated with the behavior of BTC - the other two being Tezos and Chainlink. The Lab had even calculated the coefficient of such a correlation, with Cosmos having the lowest showing at 0.31.

Therefore, when making short-to-midterm projections concerning the price action of ATOM, one shouldn’t rely too much on the hype around the approaching Bitcoin halving to drag the price of Cosmos to some new heights.

In order to provide closure on the question of divergence of price movement between ATOM and BTC, let’s have a look at the comparative chart below that shows the flow of both currencies over the period of the last 90 days. 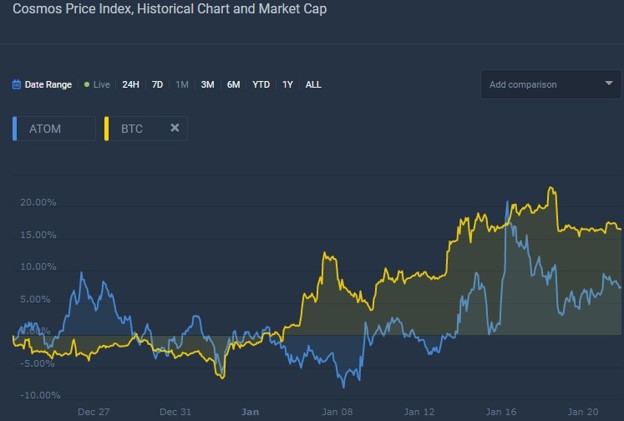 This graph also shows that the swings in the price of Cosmos over a short distance occurred in relatively sharp spikes with little to no consolidation periods, which should also be taken into account when devising a trading strategy, especially in the ATOM/BTC pair.

While on that topic, let’s have a quick look at that particular pair on the daily time frame. Frankly speaking, this is one of the neatest charts that show a gradual falling trend being reversed to an equally smooth uptrend that is currently ongoing. This brings us to the conclusion that although Cosmos could be volatile in the short run, it moves much more fluently on a long path.

Since last September, the price had been moving obediently within the range of the ascending channel, making higher highs and lower lows at each wave - a very comfortable movement for swing trading. However, the beginning of the year didn’t go too well for ATOM as it lost 8% against BTC, broken through the channel to the downside, and began consolidating at the level of 500,000 Satoshis. Therefore, if you are trading this pair, make sure to put a stop-loss at an acceptable price level.

When making a switch to the ATOM/USDT pair, we can see on a 1-day chart a picture that is generally similar to the one involving Bitcoin: a fluent descending trend with no false breakouts, an almost textbook double bottom reversal pattern with a big neckline, which converted to a present uptrend.

So far, the price movement within the confines of the larger upward channel has also been seamless with only one fake breakout at the $3 area. ATOM doesn’t show any motions above or beneath the 50-day DEMA, which signifies the continuation of the trend. The 14-day RSI is at 55.4 right now, balancing between the overbought/oversold areas.

To summarize, if you are looking for a cryptocurrency that isn’t extremely volatile, thus allows for elaborating long-term trading strategies, then Cosmos is right in that alley. The optimal tactic with regard to ATOM is to trade within the drawn channels and look for the signs of potential breakout.