Traders who pay the necessary attention to fundamental analysis of cryptocurrencies should know that Cosmos (ATOM) has one of the most actively developing ecosystems for interoperable blockchains, decentralized applications, and cryptocurrencies.

Without delving deep into technicalities, allow us to state that if appropriately realized, the solution offered by the Cosmos team is going to be much sought after by high-tech and business entities that plan to exploit blockchain. The reason being that current blockchain ecosystems mainly exist autonomously and are literally deaf to peer networks, which leads to issues related to scalability, productivity, and, ultimately, mass adoption of the blockchain technology and cryptocurrencies.

Basically, ATOM is a must-have cryptocurrency for technologically-minded traders who pay the deserved respect to fundamentals and deal with coins that aren’t necessarily going to bring immediate profits since Cosmos has had only a few significant price spikes in the history of its price action.

When it comes to the fundamental upgrades, there is an upcoming launch of the Inter-Blockchain Communication (IBC) protocol that is going to power the so-called Internet of Money (IoM), a solution that is going to facilitate a seamless transfer of cryptocurrencies and other types of digital assets within the proprietary blockchain ecosystem.

The successful launch of IBC should be a significant breakthrough for this project - in that case, the price of ATOM is likely to receive a boost that might even reverse the lingering downtrend that began after the coin had bumped into the all-time high at $7.25. On March 13, the darkest day for the cryptocurrency market in 2020, Cosmos sank to the all-time low at $1.06 but quickly kicked off the bottom. Given the approaching Bitcoin halving and the launch of IBC, ATOM has the potential to leapfrog over a couple of resistance levels and start forming a trend reversal pattern of some sort.

ATOM could consolidate before the burst

The weekly  ATOM/USDT chart clearly shows how profound the impact of the bears has been in this particular market. The sellers have been dominating since the middle of 2019 but, according to the Stochastic showings, their pressure appears to have peaked during the climax of the market crash. 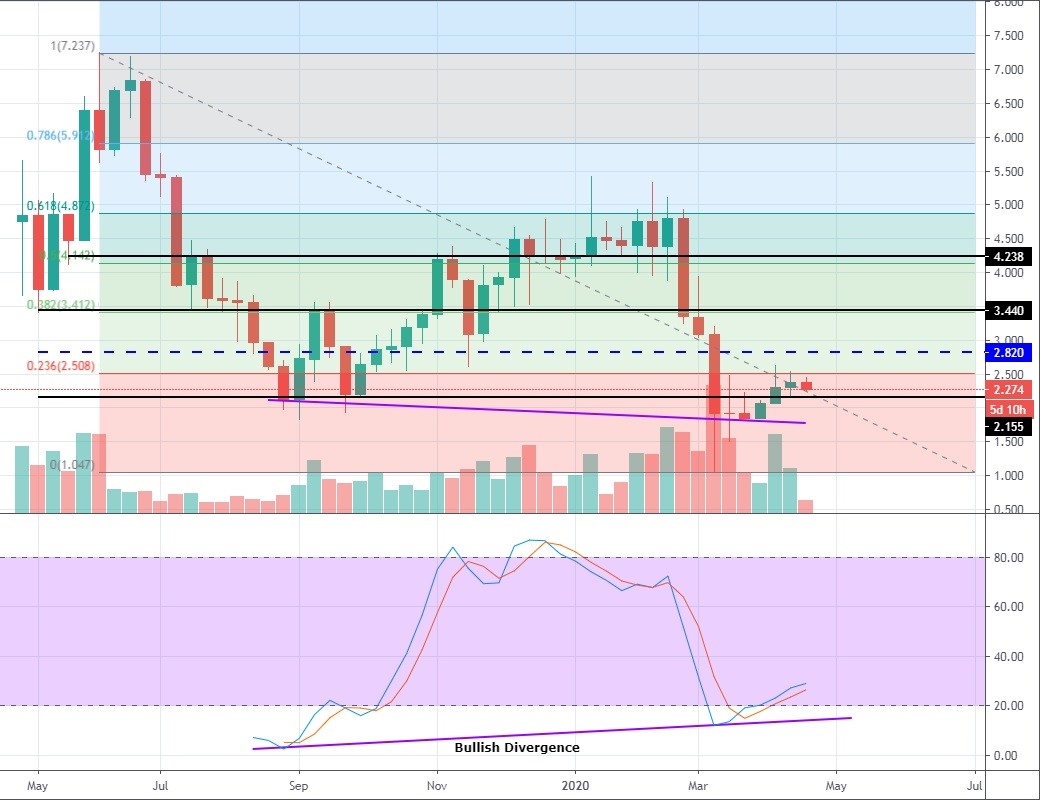 Also, a keen eye should have noticed a clear-cut bullish divergence revealed by the same oscillator; therefore, if Cosmos manages to gain a stronger upward momentum, inspired by fundamental improvements and the overall market stabilization, traders could witness a price surge of around 45%, right towards the 0.38 Fibonacci level where there is also a tight convergence with the resistance line at $3.4.

But before that, the price has to make its way out of the area between the $2.1 support and the current three-weeks’ old resistance at $2.5 that again converges with 0.236 on Fibonacci, and then penetrate the interim resistance at $2.8, after which, the road to $4.2 is going to be wide open.

Given that the newly emerged oil crisis might halt the ongoing recovery of all markets, including the cryptocurrency one, ATOM might well get stuck in this consolidation zone for another two to three weeks. Traders who recognize the prospects of ATOM should use this period of consolidation to increase the size of their position in this market, gradually.