Unlike the majority of fellow DeFi cryptocurrencies that were able to withstand the bearish pressure that began mounting at the beginning of September, Ren (REN) appears to be finalizing the price cycle after making a dramatic U-turn and getting back below $0.2 upon completing a phenomenal run to $0.56. 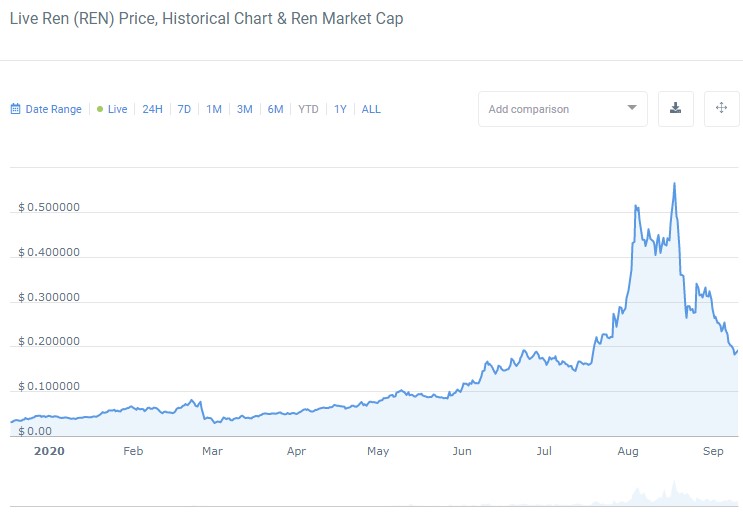 A continuing price decline or a bullish reversal?

Traders who were a part of the REN/USDT market during the summer must have had quite a rollercoaster ride since the token that serves as the lifeblood for RenVM that offers the interoperability solution to the DeFi sector has had an astonishing bull rally that began after the project announced the launch of mainnet back in May. 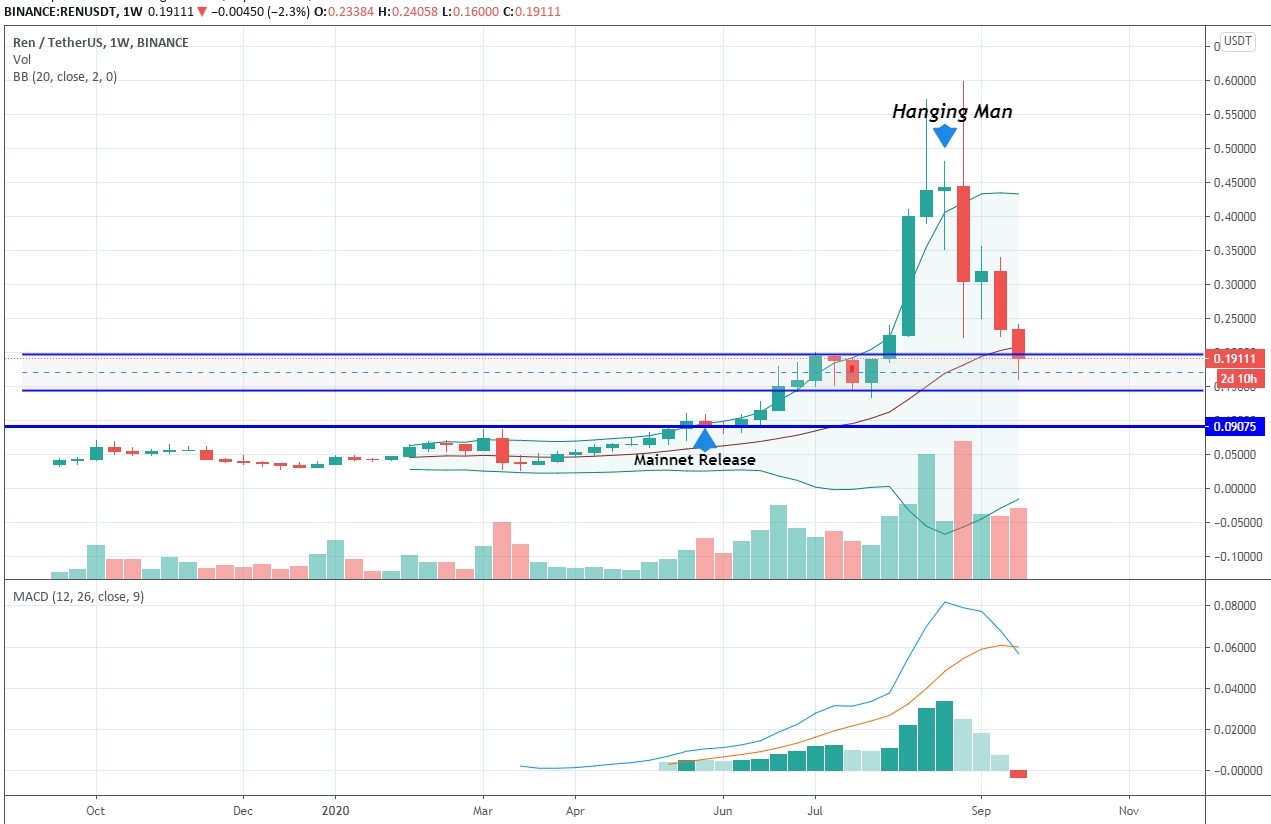 Ren has been among top gainers on the market in the period from May until the end of August, having made over 700% to the upside in the course of the powerful rally that had been briefly brought to a halt only once, when the price stumbled at the resistance at $0.2 on its way to the all-time high at $0.59, recorded on September 1.

Before the reversal, REN had given clear signals to traders - first, when it got pressurized down from $0.57 to $0.42, which revealed the sellers’ intention to defend that level, and the second one came in the form of the hanging man candlestick, which is a textbook bearish reversal signal.

The first week of September was absolutely disastrous for Ren as it lost 63% immediately after hitting the all-time high, which must have come as a shock to most retail traders who were fooled by the spike to ATH and began to sell in panic when the price started crumbling.

All in all, in the past four weeks, REN lost 73.5% of its value to the bears and rolled back to the area between $0.15 and $0.19, where it had been consolidating at the initial stages of the rally.

At the moment, there are no signs of even the slightest effort from the buyers to turn the tables in their favor as the sellers are producing significant trading volume, comparable to the one seen during the bullish phase.

In addition, MACD presented the fully-formed bearish crossover and the first red histogram in months, which could only mean that the downside momentum will persist and gain strength in the coming weeks, so traders should mentally prepare themselves for the rollback to $0.9, the starting position of the rally. There is a slight possibility that Ren would manage to cling to a straw and remain inside the designated consolidation channel for a while, but the overall outlook here is certainly bearish, so consider taking short trades on this time frame for the time being.

The daily time frame reveals an enormous cluster of bearish volume that was accompanying the price action since the second week of the month, whereas a rare spike of bullish activity has failed to pose any threat to the structure of the downtrend. 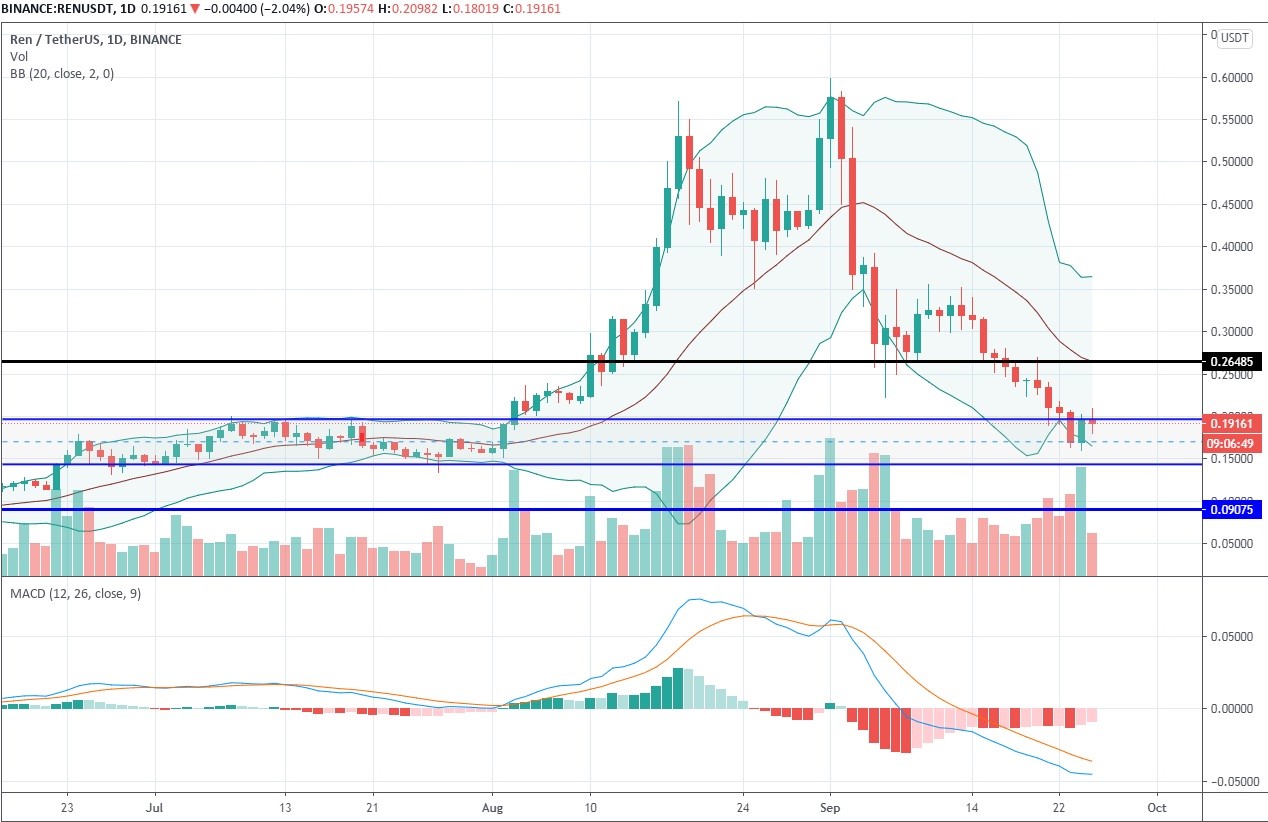 The fact that MACD is close to the oversold extreme at -0.05, and that the price action already takes place in the lower BB band, suggests that the price might bounce to $0.26, a 30% gain, over the next ten days, which presents an opportunity for a quick trade after the breakout above $0.2.