With everyone’s attention shifting from DeFi to Bitcoin’s (BTC) jaw-dropping 55,4% trip to the upside, which landed it in a close proximity to the all-time high, Ethereum (ETH) has been forced to take a backseat for a while and be more moderate in terms of gains. The current price of Ethereum sits at $473 after the 27% appreciation in the past 30 days, having gone from $379 in the middle of October to its present standings.

Given that the doubts about the bullishness of the current cryptocurrency market are melting by the day, our proprietary Ethereum price prediction model dictates that in 30 days, the ETH value in USD will increase by 19.45%, hence hitting the overhead resistance zone between $573 and $600, the target that converges with the 38.2% Fibonacci retracement level. 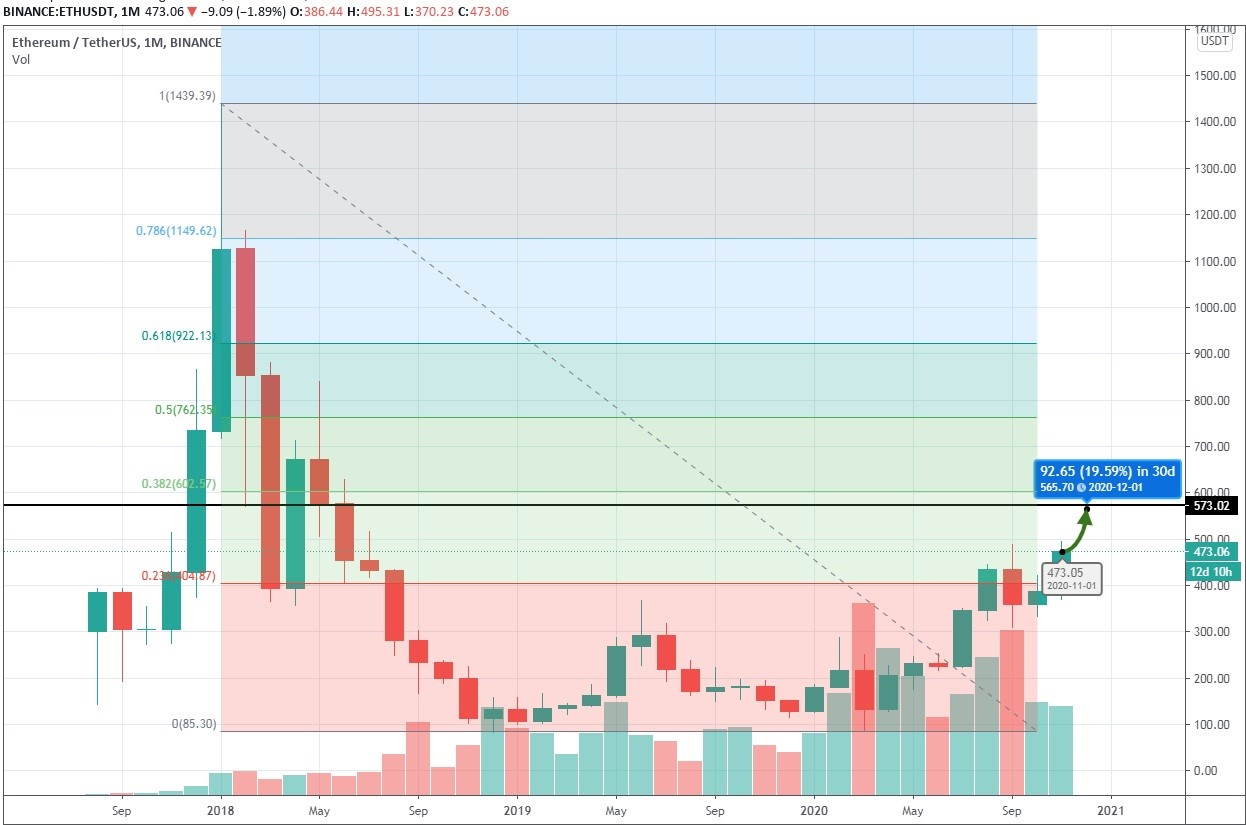 The altcoin’s prospects on the Ethereum historical chart look bullish since the current monthly candle is about to close significantly higher than the previous three candles, and probably higher than the upper wick of the September candle, which is going to constitute a very strong ETH buy signal and confirm the buyers’ intention to drive the Ethereum price to the designated target.

Add to that the fact that the buying volume has been picking up since the 20% dump in September, and we get a nice bullish setup for the continuation of the uptrend into 2021. Therefore, if you still doubt whether Ethereum is a good investment, just take a look at the price chart and realize that it might be the last opportunity to buy ETH at such prices.

What 2021 is going to bring the Ethereum traders and investors?

For the 2021 Ethereum price prediction, we will address our AI-driven algorithm which suggests that by the same time next year, the Ethereum price in USD will attain the height of $1,158 per coin, with only 37% being left to the historical high.

The anticipated path of ETH is accurately depicted on the chart above, where you can notice that in a month, we expect the Ethereum price to start appreciating significantly because of a crucial fundamental driver that is the launch of Ethereum 2.0.

In a nutshell, Ethereum 2.0 is an upgrade that will bring fundamental changes to such network functional capabilities as transaction speed, network scaling, interoperability, and security. Should these and all accompanying changes be implemented successfully, our stance on ETH will change from being moderate to extremely bullish since Ethereum will get a chance to reset the rules of the crypto game.

But since we offer a comprehensive ETH price prediction for 2025 and 2030, we would need to dive deeper into the fundamental analysis of Ethereum 2.0 because the fundamentals will have a major impact on the price of ETH in the next 5 to 10 years.

Ethereum 2.0 is the eagerly awaited, and slightly overdue, scaling solution that is an important stepping stone for the network's eventual transition to the Proof-of-Stake (PoS) model. The development of Ethereum 2.0 began back in 2017, the time when the blockchain started to become bloated and congested when the transaction volumes had gone overboard. Vitalik Buterin, the founder of Ethereum, thought that the introduction of PoS would greatly facilitate the consensus achievement and reduce the block production time to a fraction of its current value. 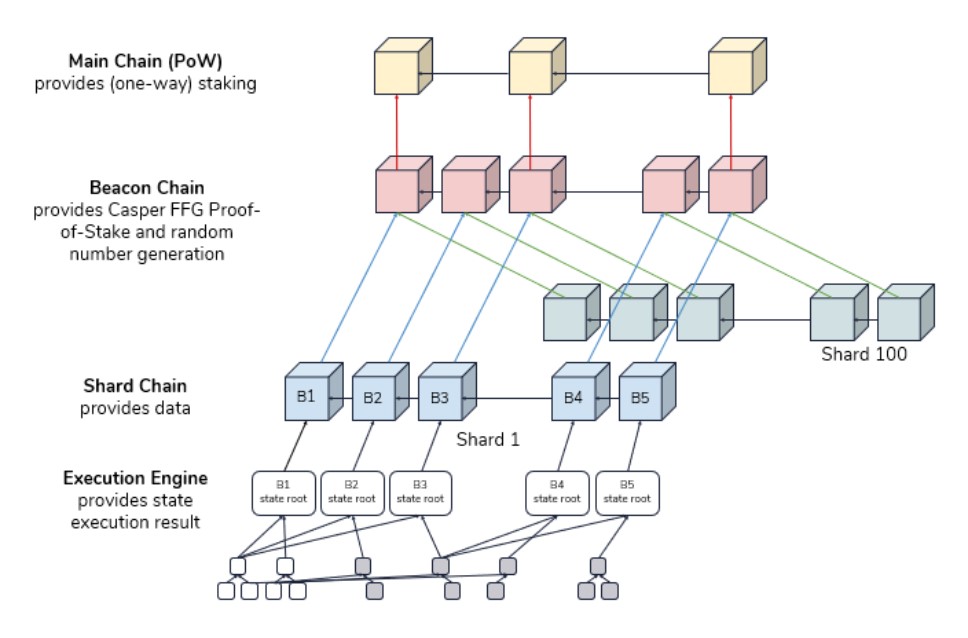 But Proof-of-Stake isn’t the only technological upgrade that will be incorporated in Ethereum 2.0. Another one, called sharding, is said to be able to resolve the burning problem that is scaling. Thanks to sharding, the Ethereum blockchain could be split into smaller pieces dubbed shards, with each such shard being able to operate as an autonomous blockchain (shard chain) with its own smart contracts and balances. The total number of shards on the blockchain will amount to 64. Once Ethereum 2.0 gets to operate at full capacity, the shard chains are supposed to establish their own execution environment, thus taking the load off the main network.

We called the upgrade long overdue because there have been numerous delays along the way, yet slowly but steadily, the team had first progressed to mining the genesis block on the testnet, and then to the launch of deposit contract and the beacon chain, a crucial element of Ethereum 2.0 because it will operate the PoS consensus. The so-called Phase 0 of Ethereum 2.0 is set to be launched on December 1, however, the data shows that only 19.4% of all ETH required to be staked in the deposit contract have been dedicated by the validators.

This once again puts the timeliness of the proper launch of the upgrade into question, but there is hardly any doubt that Ethereum 2.0 is going to have a full-fledged launch sometime next year. This would be an event of grand significance that will surely correspond with the substantial rise of Ethereum price in USD, to the point that it will come extremely close to Ethereum’s highest price at $1,432 recorded in January 2018.

The price of Ethereum in 2025 - our prediction

The next five years will determine whether Ethereum would be able to pose a serious threat to the overwhelming Bitcoin domination that now stands at 66.4%. That will no doubt depend on whether Ethereum 2.0 would live up to the expectations. Probably the most optimistic scenario was voiced by Brian Shuster, the founder of Ark Capital, who stated that in 2025, Ethereum will be worth around $100,000. Moreover, he argues that ETH has the capacity to become a better store of value than gold, though it’s our conviction that BTC would assume the role of digital gold and a store of value, whereas Ethereum would become the main driver behind the development of blockchain as an industry.

Our Ethereum price prediction for 2025 is more down-to-earth because realistically, and given the proclivity of the Ethereum team for tardiness, it would take another 2 to 3 years for Ethereum 2.0 to be fully implemented and for the ETH price to adapt to the altcoin’s drastically increased role in the cryptocurrency space.

Upon taking into account the Ethereum price history and other metrics, such as the Cryptocurrency Volatility Index (CVX), we predict that in 3 years, its value in USD is going to rise by 760% and reach $4,100 per coin. The price appreciation will continue into 2024, by the end of which ETH will be worth $8,000 on the back of a strong 1,600% growth.

Now, it’s time to reveal what Ethereum will be worth in 5 years. According to our estimates, in 2025, the price of ETH will go up to $16,000 that will constitute a 3,274% rise from the current Ethereum price.

The ETH price chart above clearly shows that the biggest spike is due to happen in 2024, right at the time when Ethereum 2.0 will have undergone all improvements and tweaks and become an even more fertile ground for the development of dApps, decentralized finance solutions, and non-fungible tokens that should become the next big thing after DeFi.

The market capitalization will grow exponentially along with the ETH price: our algorithm predicts that  in 3 years’ time, the total sum of money vested in this altcoin will amount to $465 billion, a 763.7% increase from the current $53,9 billion; in 4 years, the ETH market cap will grow by 1,598% and reach $916,2 billion. In 2025, the capitalization of Ethereum will double in size and hit the $1,8 trillion mark.

The price of Ethereum by 2030 will largely depend on the progress made in terms of the adoption of this blockchain solution by both individuals and large enterprises that would be willing to exploit the benefits of decentralized finance.

Let’s not forget that Ethereum isn’t the only fish in the fishtank - we now see the emergence of at least three competing blockchains and their native coins, namely Polkadot (DOT), Cardano (ADA), and Tezos (XTZ), along with a host other so-called “Ethereum killers” like Cosmos (ATOM), Qtum (QTUM), and even TRON (TRX) that will fight tooth and nail to keep Ethereum from becoming an even more dominant power.

Nevertheless, the price of ETH in 2030 will keep on soaring to new heights as blockchain grows into being the foundation for a new digital economy. We predict that in 10 years, ETH will get to the price level predicted by Shuster, which is $100,000 per coin. This Ethereum price forecast is supported by prominent financiers, such as Dan Morehead, the CEO of Pantera Capital who believes that ETH will reach six figures in 10 years, along with Nigel Green, the founder of deVEre Group, who reckons that the ETH price will go from $2500 to $100,000 during the bull market that will come after the ongoing one.

Is now the right time to invest in Ethereum?

There would probably be no better time to invest in ETH than now, because after this bull market, traders might never see prices like $400 per coin ever again.

What are the fundamental advantages of Ethereum?

Should Ethereum 2.0 be implemented successfully, Ethereum will become technologically the most dominant solution in the blockchain space.

What is the ETH price prediction for 2021?

What will Ethereum be worth in 5 years’ time?

What will be the price of ETH in 10 years?

The Best Altcoins to Have in Your Cryptocurrency Portfolio in 2023

The Ethereum Merge is Complete: the Details and the Implication for the Cryptocurrency Market and the Blockchain Industry