It’s our firm conviction that Ethereum (ETH) probably has one of the strongest bullish biases on the macro scale, compared to other top altcoins, as well as the promising ones. Perhaps there’s no need to reiterate that this conviction is based on Ethereum’s fundamental value that is going to increase exponentially once Ethereum 2.0 gets properly launched. This would be a monumental event for the entire crypto industry, though it’s unlikely to happen this year as the developers have allegedly just released the deposit contract, with the beacon chain genesis remaining in the works.

But even with the constant delays, which is sort of a habit of the Ethereum Foundation, justified only by the sheer scale of the challenge, the second cryptocurrency has been doing extremely well in terms of gains and price action:

The buyers must hold the support 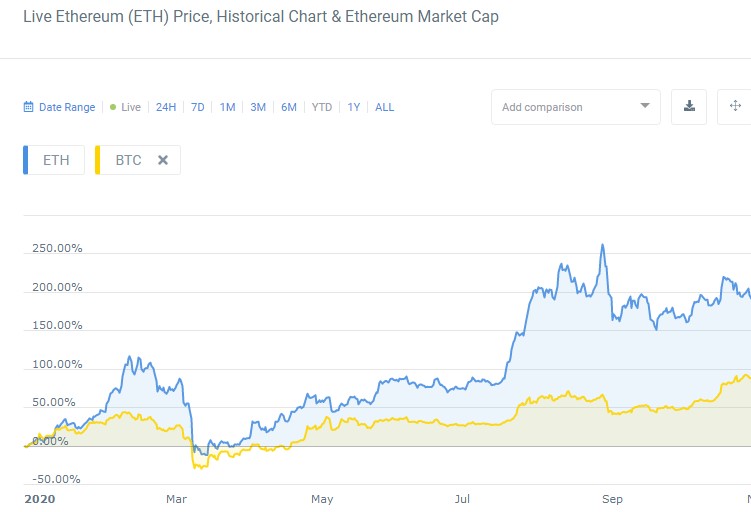 It’s evident from the YTD chart above that Ethereum’s relentless strive to the upside after the March market meltdown has been cooled off a bit by Bitcoin’s performance in the last few weeks, though the difference in gains between these two remains striking.

However, the chart also shows that ETH had been forced to consolidate for the past two months, with support at $340 and resistance at $377, which has already been broken to the upside. 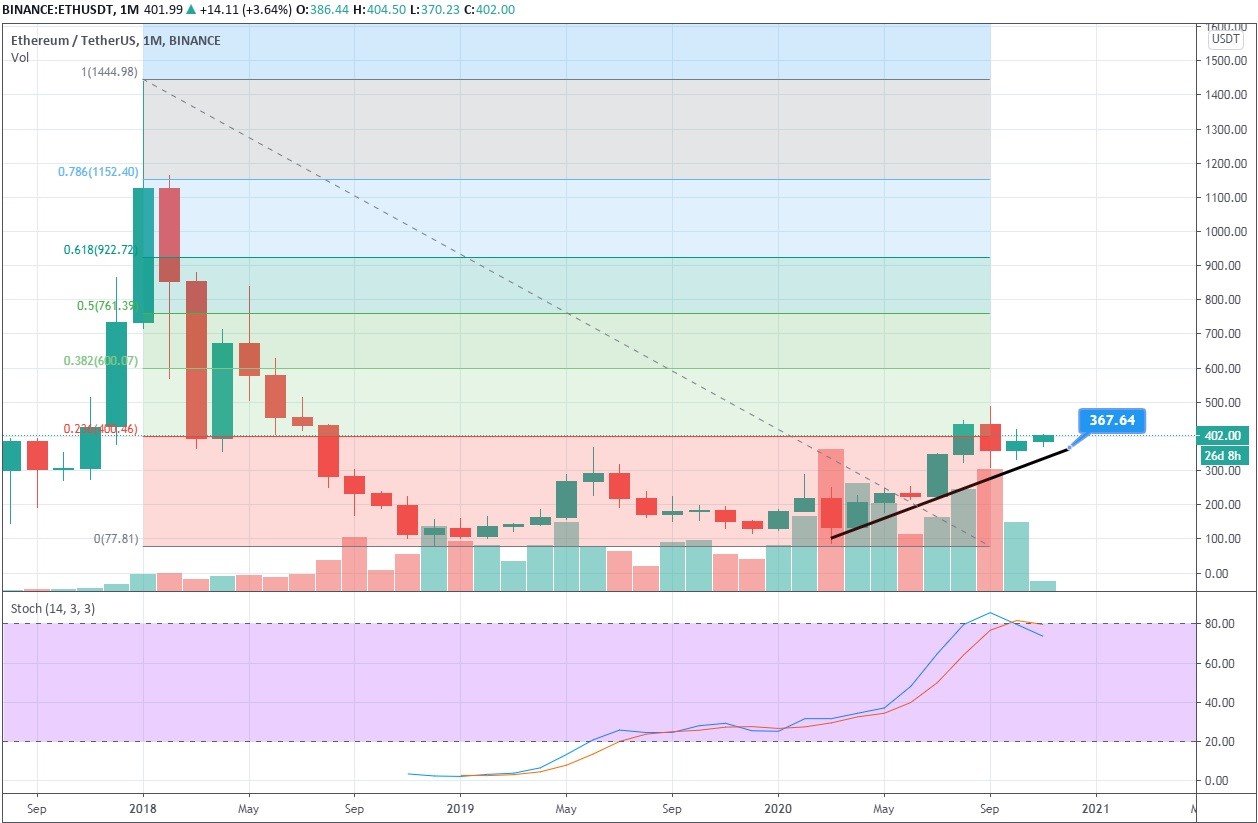 Ethereum still has a very healthy bullish outlook upon establishing the two-year high at $499, though we do see a signal of looming correction, provided by Stochastic that has crossed to the downside from the overbought area, suggesting that the bearish momentum is acquiring pace, despite the last two monthly candles being green.

Nevertheless, this move on the part of the indicator won’t be confirmed while the price holds above the diagonal support at $368 and would be negated if the current or the following candle closes above $438 and the 23.6% level on the Fibonacci retracement grid. 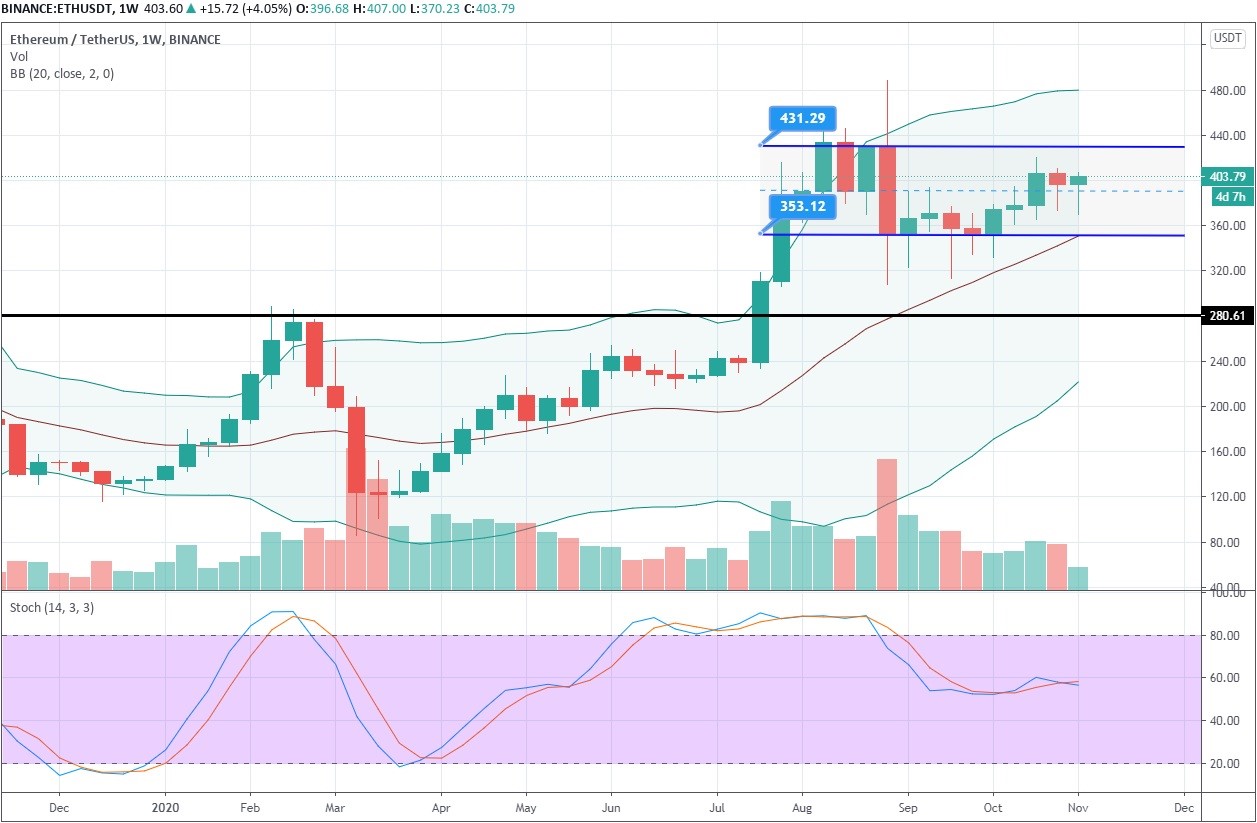 The weekly chart, however, shows that ETH is struggling to make a decisive break out of the wider range between $353 and $431 on the backdrop of diminishing trading volume and the falling Stochastic. At the same time, the Bollinger Bands remain wide open, so traders should brace themselves for periods of increased volatility and have a stop-loss in place to avoid being left hanging with a losing position if Ethereum is to travel southward. 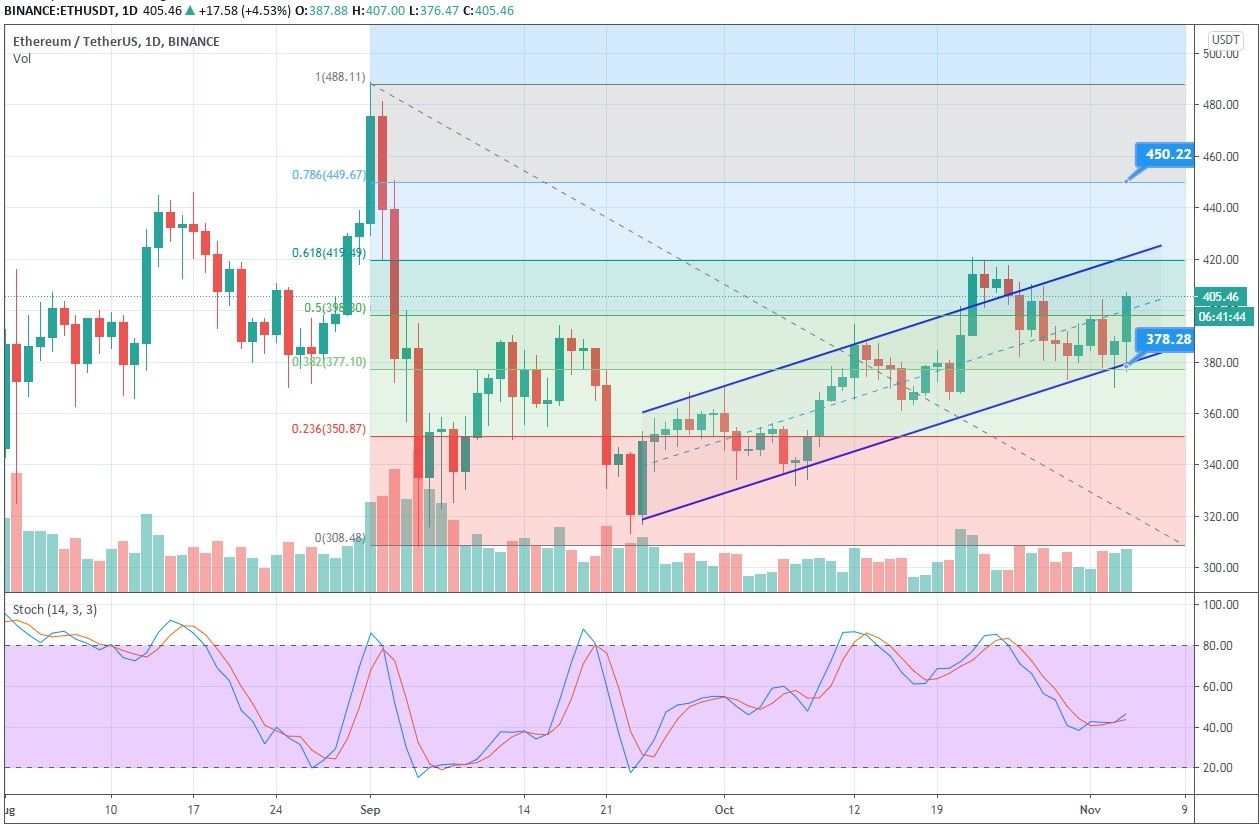 On the daily chart, we see that ETH is traveling within the confines of the ascending channel, which provides for comfortable trading. The bullish candle on November 4 is engulfing the price action from the past seven days. If that candle closes above $404, we might witness a strong rally to $450, which coincides with the 78.6% Fibonacci retracement level.