Ethereum's price in 2019 saw a rather significant improvement, which was followed by only slightly large fall back down. The second-largest coin's price is still higher than it was at the beginning of the year, and it is still far from its lowest point in 2019, but its current value is also only half of its highest point in 2019.

As the second most important coin ever to be created, as well as the second-largest crypto by market cap — Ethereum is highly sought after by investors, HODLers, traders, developers, network participants, and others. With that in mind, it is hardly surprising that so many people wish to know what to expect of it and its price. While it is always difficult to try and predict the performance of any coin, a look into its past is often the best way to try and figure out its future.

As many are likely aware of, Ethereum was launched back in April 2015, when it brought a major change in crypto. It was the first project to be launched as a development platform, instead of a digital currency meant to be used as a currency. This did not have a great impact on its price straight away, but as soon as cryptocurrencies started seeing more popularity in 2017, its potential was quickly recognized, and ETH soared.

It went from $12 to $300 in only about 4 months, between February and June of 2017, and while it did take it a couple of tries to breach the resistance level at $300, it did so after a few more months. It kept growing and growing until it hit $1,400, which was its biggest resistance to date. That's when the 2018 bear market arrived, and Ethereum got knocked down, just like every other coin out there.

In April and May 2018, when many thought that the bear market had finally ended, the coin stopped its drop at $380, and surged once again, almost reaching $900. But, this was only a temporary quiet before the storm, and ETH spent the rest of the year sliding down towards $100. It even dropped below that following the second market crash in November 2018, after BCH hard fork and hash wars that followed, sinking to $84 for the first time since February 2017. 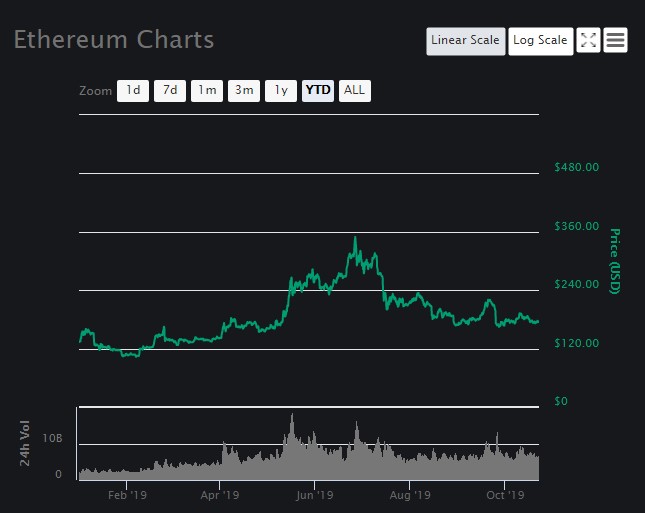 Luckily, this was only temporary, and ETH started growing again in 2019. In fact, a series of rallies in early 2019 brought it all the way up to $360. While it never reached this resistance fully, it came quite close before the rallies ended, and corrections took place. Since then, ETH has mostly been fluctuating around $180, only going slightly above or below this support level.

What to expect in the future?

So, what does all of this tell us about Ethereum's future? Well, the first thing to note is that ETH does have a will to grow. It took every opportunity to do so that had presented itself. The coin's price is still quite obviously tied to that of Bitcoin, but it still holds the major potential of its own.

In the future, ETH is likely to continue following Bitcoin's lead, for better or worse. Many coins get impacted by BTC only when it drops, while ETH gets a taste of surges, as well. The future will also bring Ethereum 2.0, the project's largest update that will bring a major change, and there is no telling how this might influence it. It could decouple from BTC, and grow; or it could simply keep following it, especially if BTC itself surges. Whatever may happen, keeping an eye on ETH in the following months is definitely recommended.