The overwhelming majority of cryptocurrency experts are preoccupied with devising scenarios of the future price action of Bitcoin and other top cryptocurrencies, while traders have lost their sleep worrying when those coins would break even after the Coronavirus Crash, there are currencies that have already achieved tremendous success in that regard, but still remain underdogs in the eyes of retail speculators.

Within the ranks of such underdogs stands DigiByte (DGB), a coin that is just three positions on the wrong side of the top 50. But when it comes to gains, it has already outrun its closest competitors Kyber Network and MonaCoin by miles, as well as some of the top coins like XRP and Litecoin. 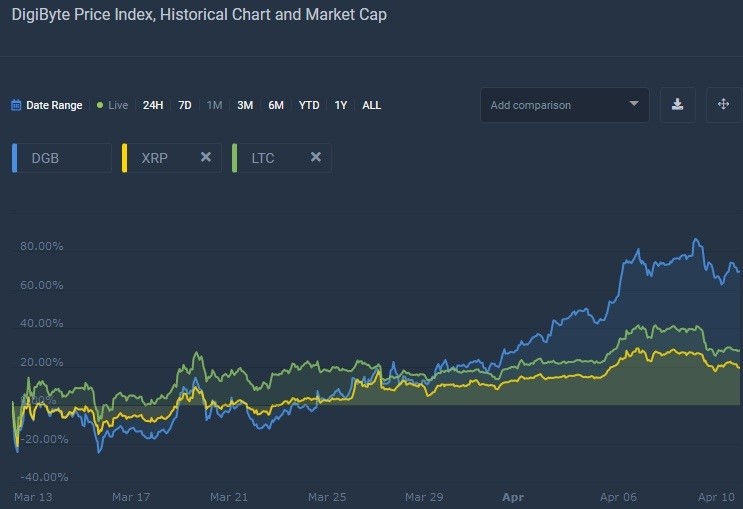 Although the year 2019 can’t be called the finest for DGB in terms of gains - the coin still sits in the red by 52% against USD - the first quarter of 2020 has proven to be tough but fruitful, despite the brutal price fall. Over the past month, the coin has been showcasing nothing but gains in double figures: 14% - USD; 31% - BTC, and 45% - ETH. Although the reason for these respectable showing lies in the relatively small average daily trading volume that has rarely been exceeding $2 million across all cryptocurrency exchanges.

It means that DigiByte is prone to price manipulation because it doesn’t require one to be a whale to be able to move the price in the desired direction.

DigiByte represents a blockchain ecosystem for expedited transactions of digital assets, as well as the utilization of smart contracts and dApps. Thanks to the use of the blockchain built on the principle of Unspent Transaction Output (UTXO), the developers claim to have created a faster, safer, and more decentralized solution. The system also uses the Dandelion++ for better user privacy, and Odocrypt to ensure ASIC resistance.

DigiByte has a fundamental asset score of 604, which is slightly above average. Moreover, the coin has a stable overall outlook with regard to its team and ecosystem, which makes DGB suitable for mid to long-term trading.

DigiByte is one of a very small number of coins that had almost immediately recovered after the panic sell that occurred in mid-March, upon the World Health Organization (WHO) declaring the COVID-19 pandemic. In two days, the price of DGB had fallen by 74%. It then almost immediately provided a shining example of why trading that coin, especially going short, should be exercised with great caution. 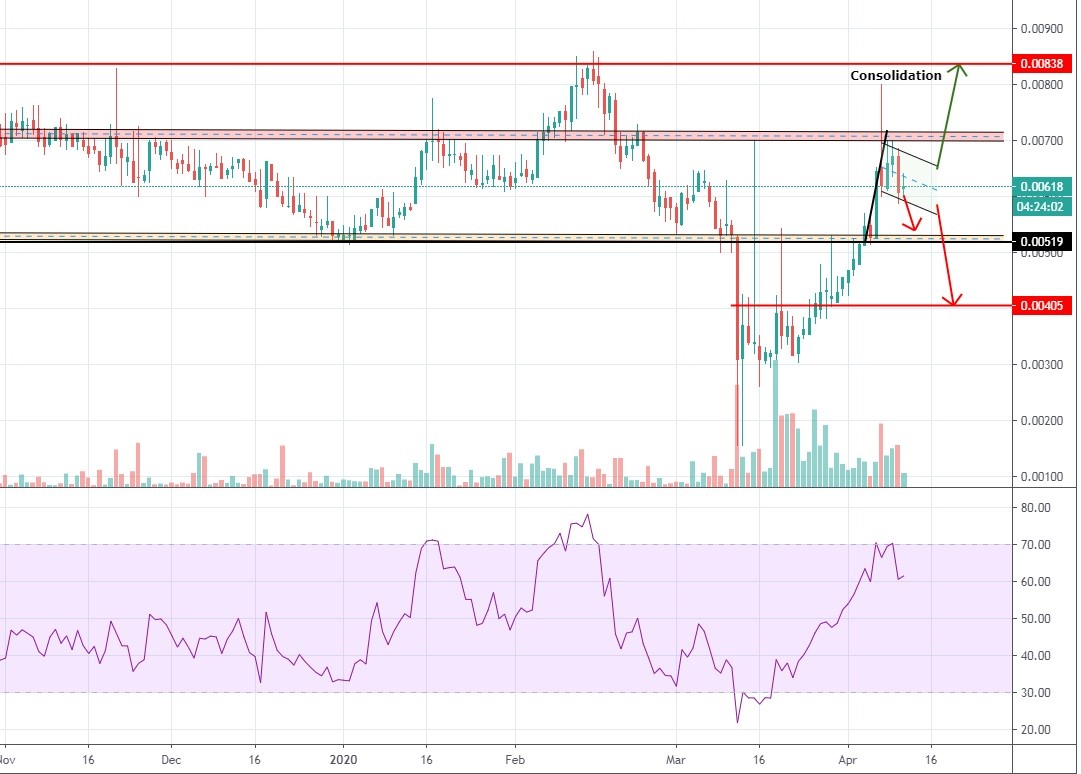 In the daily time frame, there are three absolutely enormous and unhealthy upper wicks, which have momentarily taken the price above the supposed resistance at $0.005; it is a clear sign of artificially created demand.

It means that now, at the presumed peak of the bullish rally, going short on DGB is still quite risky as the price could again move upward rapidly. However, that move shouldn’t take the price higher than $0.0083 because it’s the last bears’ stronghold, and that would drag the RSI high into the overbought region. In the bullish scenario, DigiByte will consolidate between $0.007 and $0.0083.

But traders shouldn’t disregard the fact that this market is already overheated due to the absence of retracement over the duration of such a protracted movement, so there is a high possibility of a large pullback to $0.004. Therefore, the best strategy now would be to wait for the bullish flag to resolve itself.