DigiByte (DGB) has rightfully earned the status of the most profitable coin of the month. Over that period of time, DGB has been going into a stratosphere like a space shuttle, gaining a mind-boggling 331.4%, as of the time of writing. Its closest rival, Hive Token (HIVE), gained "only" 216% - Chainlink (LINK) closes the leading trio with 67%.

There is no apparent reason as to why DigiByte has had such a monstrous price upsurge because the project didn't hold any crucial fundamental upgrades lately or made official announcements of the upcoming ones. Nevertheless, the coin, which is presently ranked 36th, appears to have taken the recent market meltdown as an opportunity to bottom out and begin a massive bull rally, which now has the potential to transform into an uptrend should the price successfully pass the resistance at $0.016

An uptrend in the making

But being a trader, one shouldn't engage in a lot of detective work with regard to why DigiByte experiences such a huge bull run that contradicts the overall context in the cryptocurrency market. This surge is relatively healthy since it took a bit of time to gain momentum. Also, it runs hand-in-hand with an appropriately large buying volume and has a healthy picture on most indicators. Therefore, although being somewhat unexpected and already overextended, the rapid price increase of DGB can't be labeled as a mere pump-and-dump scheme.

It is more likely that we are witnessing a revival of a cryptocurrency that had been laying at the bottom for quite a while, and we will find out the reason behind it soon enough. But right now, traders must work out the strategy for the likely future scenarios of DigiByte's price action. 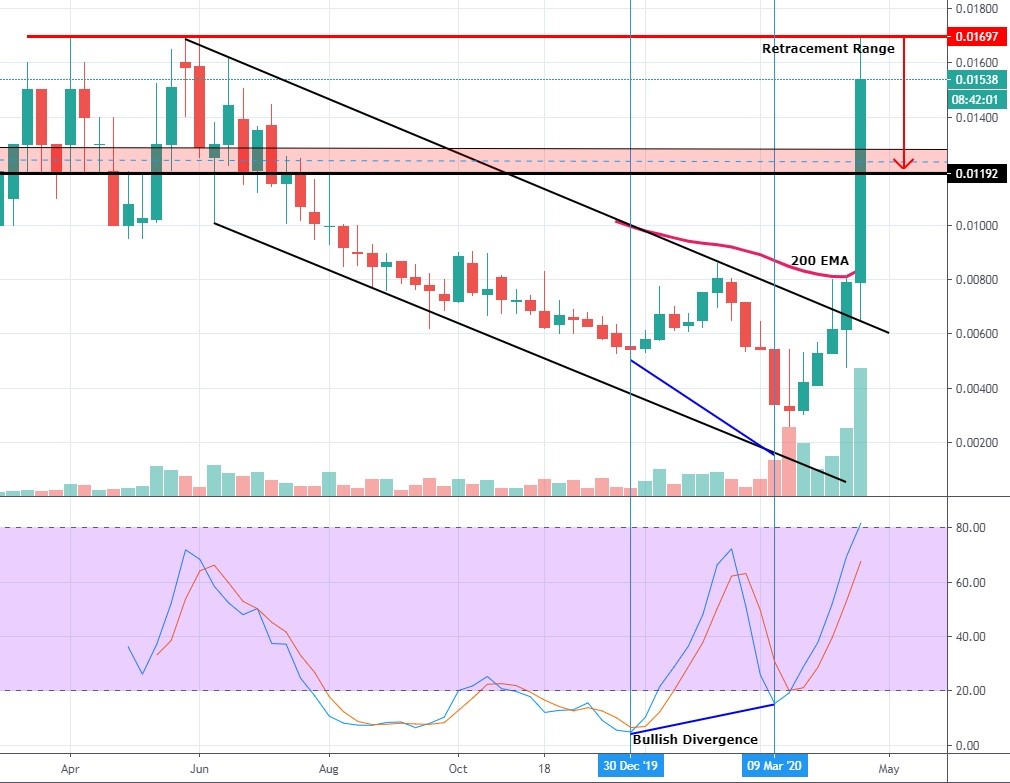 Firstly, traders should acknowledge the fact that DGB is now in the midst of making a heroic attempt at reversing the long-standing downtrend that began more than a year ago when the price action had formed a textbook double top pattern. Since that time, DigiByte has been in a freefall, having gone down from $0.017 all the way to $0.0016, losing many traders and holders in the process.

However, the observant traders should have noticed a bullish divergence that had formed in the period from December 30, 2109 until March 9, 2020, and throughout the market crash. Entering a long position in that time of panic certainly was extremely risky, but those who took that risk are now reaping enormous benefits. Right now, Stochastic shows no intention of crossing under - in fact, it is yet to enter an overbought region. Therefore, we have the reason to believe that DigiByte will spend the next week beating against $0.016, and then begin a full-on retracement, the bottom of which, according to our prognosis, will be at $0.012. The price could even dive a bit deeper, but the most crucial thing for DigiByte at this point is to stay above the 200 EMA, a foundation for any sustainable uptrend.

To summarize, it is way too early to get overly optimistic about DigiByte as the price still needs to show a healthy retracement, but once DGB establishes a foothold above $0.016, it would be bullish all the way.