While the overwhelming majority of cryptocurrencies are fighting tooth and nail to regain their position to the pre-crash levels, BitTorrent must have decided to go on a price action vacation and leave the recovery on the pause. The range of BTT’s price movement from the last month is more reminiscent of a cardiogram of a near-dead body than of a cryptocurrency that strives to regain its position. However, it might be that tricky calm before the storm. 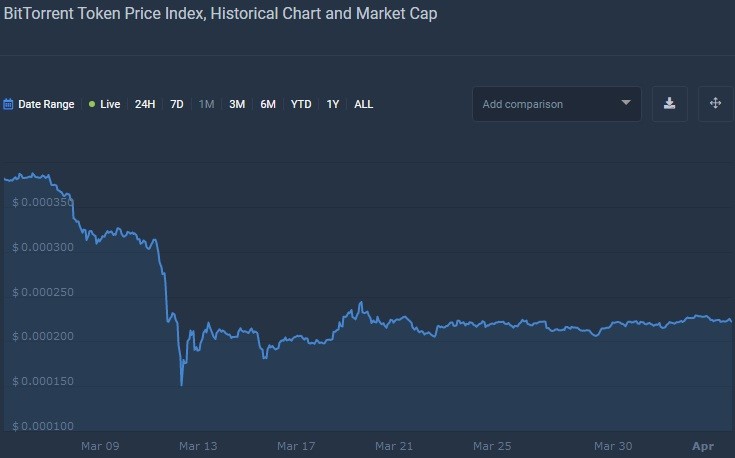 The price action of BTT from the last 30 days

The reason behind such a stalling is unclear. Most likely, the majority of investors and traders have abandoned BTT after the market had collapsed, and now are reluctant to begin accumulating their positions. On the other hand, the higher management of that project, which also runs the Tron Foundation and the recently acquired Steem platform, has too much on their plate right now, so the BitTorrent-related issues have been put on the backburner.

Nevertheless, the market capitalization has been kept stable at around $47,4 million; although the average daily trading volume has been reduced by more than a half compared to the beginning of March - from $73 million on March 4, to $35 million, as of writing.

In the gaining department, BitTorrent has been underwhelming, to say the least. Over the past month, the coin backed by a decentralized file-sharing protocol has been in the red against all three major currencies: - 40% - USD; - 21.2% - Bitcoin; - 4.4% - Ethereum. The only positive moment for BTT happened during the previous seven days when it gained a measly 5% against USD.

Is there a price burst lurking in the shadows?

In all candor, BitTorrent has gotten itself into one of the tightest price ranges we have seen on the cryptocurrency market as of late. After taking a nosedive to the all-time low at $0.000139 on March 13, - a 61% value loss - BTT had made a quick 42% recovery to $0.0002 on the back of the heaviest bullish volume so far. 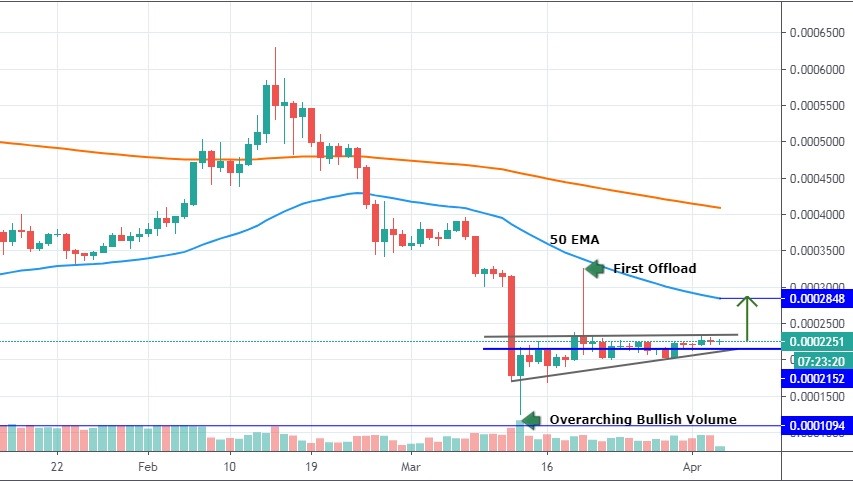 That exact level marked the stumbling block which the coin has been hitting ever since. The buyers, who have been hoping to make a quick buck on the initial bounce to the upside, are now trapped in the range between $0.00019, which constituted the close of the daily bullish candle, and $0.00022 that currently acts as support/resistance, or more like an axis around which the price action revolves.

Also, please note that the trading volume, either bullish or bearish, didn’t exceed the one on the first green candle after the collapsing red one. Moreover, the buying volume on that day was actually greater than the selling one that had sent the price crashing. The larger bullish volume was actually recorded on January 14. It means that there has been a huge demand for BitTorrent, even more significant than during the mini altseason of January-February, but the buyers have stalled for some reason, or a big player is still obtaining a substantially large position after the first offload which occurred on March 20.

This situation presents a splendid opportunity for scalpers to make decent money since BitTorrent is moving in a very predictable range. But the bulls have been gathering strength for quite some time - large buying volume - so a breakout to the 50 EMA or $0.00028 is to be expected in the near future.