BitTorrent is one of the newest coins among those in the top 100 rankings as it was released on January 31, 2019, by a San Francisco-based tech company that created a peer-to-peer protocol for seamless transfer of files via torrents and other means of data exchange. The company itself was founded back in 2004 by two American digital entrepreneurs, though one of them had to leave in 2018 when the startup was acquired by the Tron Foundation. Right now, BitTorrent represents an integral part of the Tron ecosystem, with Justin Sun being the CEO of both entities.

Insight into the BitTorrent fundamental value

BitTorrent became an integral part of the cryptocurrency market right of the bat, being ranked quite highly - presently, the coin occupies the 68th spot on Coinmarketcap - and listed on the majority of reputable cryptocurrency exchanges. Last year, the company made a significant progress in the development of BitTorrent’s fundamentals, having launched the mainnet of the content-sharing platform, which includes as many as 3000 nodes, and partnering with an up-and-coming blockchain-based video streaming platform DTube, which is widely considered as a direct competitor to YouTube, especially after the latter began tightening its grip on the crypto-related content.

Obviously, the year 2019 was by far the most successful for BTT, both in terms of improvements in its fundamentals and price action. In little over three months after the release, BitTorrent had reached the all-time high of $0.0018 on May 28-29, 2019. After that, the coin had gone into a predicted correction, which ran its course only with the commencement of 2020 and its bull rally. 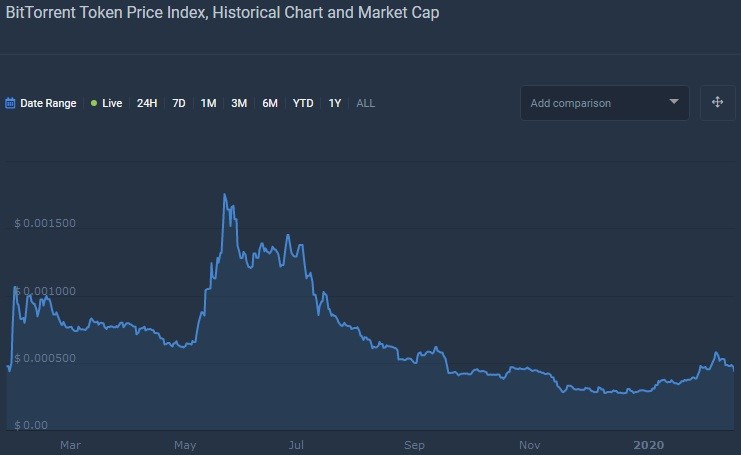 BitTorrent can’t be labeled as an excellent profit-maker for its holders since the value of the token against the US Dollar had decreased by 52.2% during the previous year, and it has gained a mere 18% over the course of the last three months. However, the coin hasn’t reached its full potential yet, so 2020 might be the period when BTT would surpass its all-time high, especially if the market manages to recover after a correction caused by concerns over coronavirus and the overall exhaustion of the upward momentum.

Since BitTorrent is closely associated with Tron, it’s only natural that the most actively traded pair is BTT/TRX.

By the way, according to market reports, the cryptocurrency exchange called Cat.Ex currently hosts 63% of the total trading volume - which constitutes $90 million on average - that could be a prerequisite for price manipulations. There has been one such instance on September 30, 2019, when the price dropped unnaturally low from 0.032 TRX to 0.018 TRX in a span of a day. 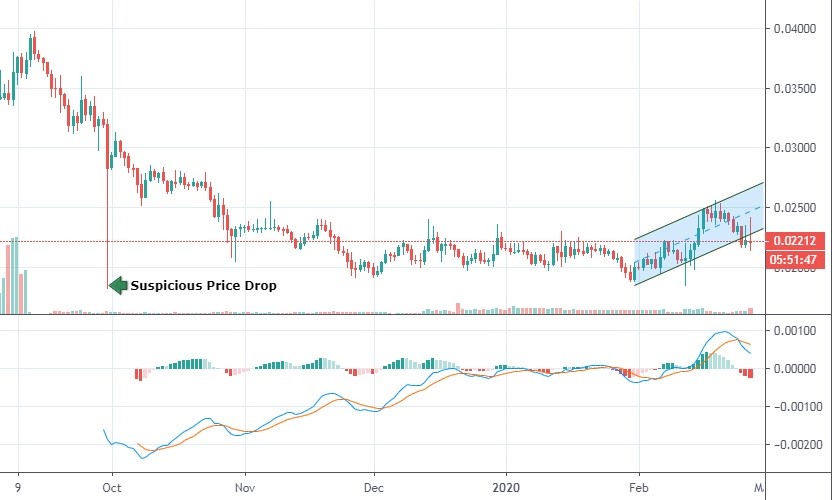 Otherwise, the price action in this pair appears to be in line with the entire cryptocurrency market as BTT is now in the phase of strong retracement after a prolonged growth. But unlike the situation in the USDT pair, BitTorrent seems to have only slightly deviated from the uptrend, having breached the support at 0.022 TRX for a couple of days and now trying to make its way inside the ascending channel. Should the crypto market bounce back after the correction, BTT would persist growing in value against Tron.

Things aren’t that optimistic on the daily BTT/USDT chart as the price is tanking after the bearish spike pattern. 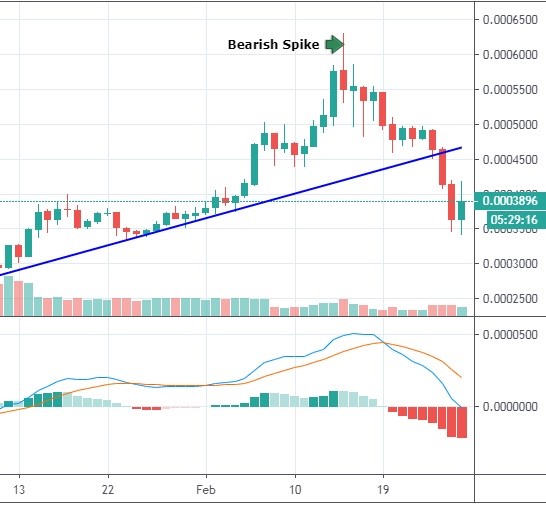 Presently, the price is shattering the uptrend structure and is now diving to the support at $0.00034, which was recorded at the initial phase of the 2020 rally. It would take an incredible effort for the price to recover, so the best option right now would be to short BTT or to cut losses while it’s not too late.