Even though BitTorrent (BTT) has been trapped within the confines of perpetual downtrend since last May when the price reached the all-time high at $0.00176, the altcoin has had a good run during the previous four weeks, as it made a strong 31% spurt to the upside, 24% of which were obtained in the last few days.

This period is also characterized by a lack of news concerning impact-making developments in BTT’s fundamentals or involvement in promising business partnerships, so the latest bull run is probably caused by the present stagnation state of Bitcoin and the resulting resurgence of the altcoin market.

BTT has also been doing well in a price race against two dominant cryptocurrencies: Bitcoin was left biting the dust as BTT juiced up by 22.6% in this market, while Ethereum has let BitTorrent get ahead only by 18%. It is too early to say that traders should prepare themselves for another episode of altseason, but BitTorrent has been given certain signs of the underlying shifts in the market in the direction of buyers. After a tedious restoration to the pre-crash levels, BTT has finally approached a pivotal point, the resolution of which will determine whether the bulls could seize the initiative and transition the current minor uptrend into a secondary one.

BTT is tackling a critical resistance

The price action analysis on the weekly time frame reveals that BTT might be gearing up for a serious move to the upside that could change the overall disposition in this market. 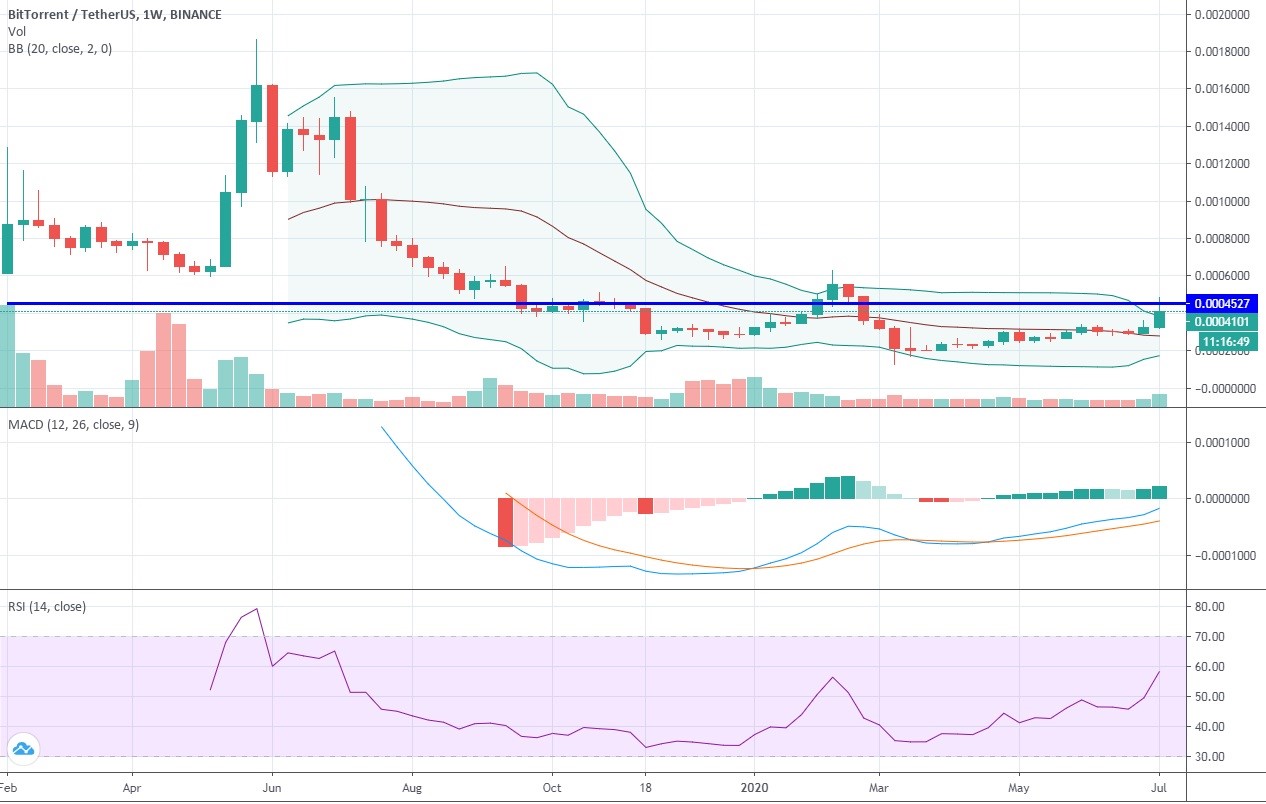 As we have already mentioned, BitTorrent has been having a blast recently that resulted in the first test of the crucial resistance at $0.00045, which served as support during the previous cycle that ended when the market collapsed. The bulls still have plenty of time to close the weekly candle above the noted resistance, although the long upper wick signifies that the bears are applying significant pressure in order to keep the resistance intact. However, there is sufficient evidence that big players in this market have gathered the position large enough to start pushing the price aggressively to the upside.

We predict that next week, BitTorrent will break the major resistance at $0.00045 and establish a foothold above $0.0005. Given how dynamic the altcoin market is right now, an even stronger upswing is to be expected.