Although IOST doesn’t belong to the cohort of cryptocurrencies that deliver mind-boggling gains, it still remains a decent profit-maker, especially in the context of the ongoing secondary bull market of altcoins. However, this coin could have been profitable only for those traders who went long on it about a month ago. Over that period of time, IOST’s value increased by 19% against the US Dollar and 3.2% against Bitcoin; compared to Ethereum, IOST depreciated in value by 27.2%. The long-term holders of the coin under review aren’t overly satisfied with its performance, which was negative throughout the past year: -20.3% on the USD market and -68% when compared to the progress Bitcoin made over the same period of time. 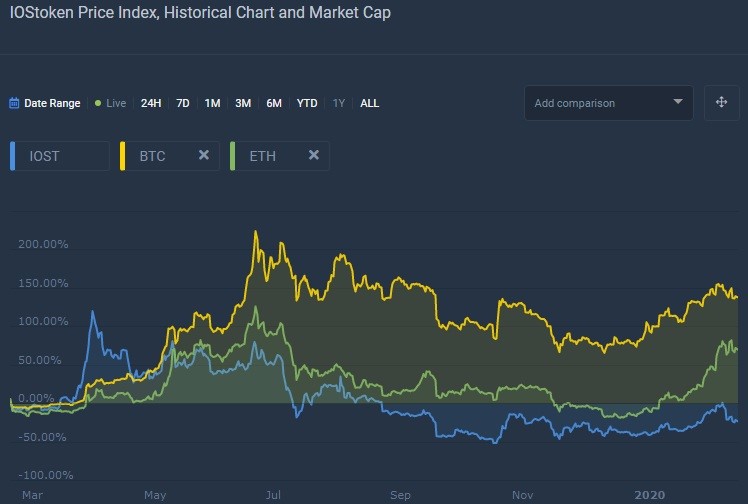 Therefore, those who seek cryptocurrencies that pump strongly and allow for reaping miraculous profits won’t appreciate IOST. This coin is more suitable for traders who often resort to an in-and-out strategy that is focused more on momentary profit-making opportunities.

The fundamental value of IOST

IOST, which stands for the Internet of Services Token, was designed to solve probably the most important problem of contemporary blockchain, which is scalability and the overall security of the network through the use of the project’s proprietary Proof-of-Believability consensus algorithm. The team reckons that their product will facilitate the incorporation of blockchain and cryptocurrencies by large business entities.

IOST is currently occupying the 78th place in the Coinmarketcap rankings, mainly due to the project’s relatively low market capitalization, which has been decreasing methodically since April 2019. Right now, the market cap of IOST stands at $76 million, whereas less than a year ago, it amounted to $210 million - probably one of the main reasons why this coin had such measly gains last year.

As of the time of writing, the price of IOST stands at $0.0068 - a 1.68% increase from the trading session of the previous day. What brings the attention to this coin is its respectable weighted daily trading volume, which is considerably larger than that of the neighboring coins. Since the beginning of the year, the volume didn’t fall below $25 million, spread evenly across several exchange platforms, most notably MXC, OKEx, Binance, and HitBTC. Therefore, if you think about getting engaged in trades involving IOST, rest assured that all of its markets have enough liquidity, and the coin itself isn’t prone to pump-and-dump schemes.

Since IOST is an in-and-out trading instrument, it would be logical to analyze its price action on a smaller time frame. 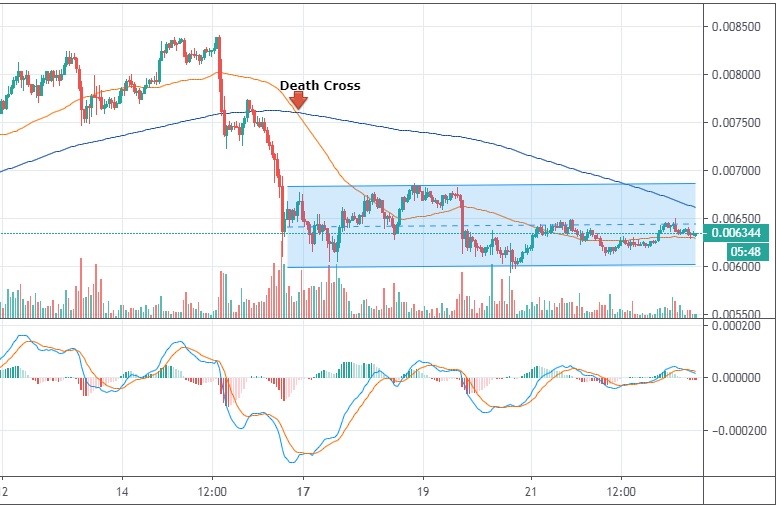 Things look quite gloomy for IOST on the hourly chart, especially considering that the 50-period MA had crossed the 200-period MA to the downside, thus forming the Death Cross, which is a screaming bearish signal. Although like with many lagging indicators, the price had already plunged by 24% before the Cross appeared on the charts.

Now, after a period of consolidation, the coin appears to be gearing up for another drop as the price action within the trading channel has been narrowing down. At the same time, the MACD line crossed the signal one to the downside and now aiming for the zero-line. So if you are looking for a quick shorting play, now could be a good time to consider entering this pair because IOST appears to be heading south.