It seems that there is something bullish brewing in the IOST market, especially in the pair with USDT, as the price has finally made it above the 200 EMA on the daily time frame. And while IOST isn’t the most appealing cryptocurrency from the fundamental standpoint - the objective of creating the Internet of Service Tokens for corporations sounds good on paper, but looks unfeasible with project market capitalization of just $84 million - the price action, especially the one from the past month, began to draw the attention of traders towards the currency that is based on the consensus algorithm labeled as Proof-of-Believability.

Similarly to the overwhelming majority of altcoins, the year 2019 wasn’t particularly fruitful for IOST as it had lost 50% of its value since last June, although back then, the market was soaring as the bull rally was gaining a lot of momentum.

The current situation in the IOST market, and the cryptocurrency market in general, is quite different now, as all participants are still shaking off the stress of the so-called coronavirus crash.

It took IOST quite a long time, 75 days to be precise, to recover from the 50% instant dump that happened in March. The price took its time to consolidate in the $0.0028 - $0.004 channel before the bulls have finally decided to step up a notch. 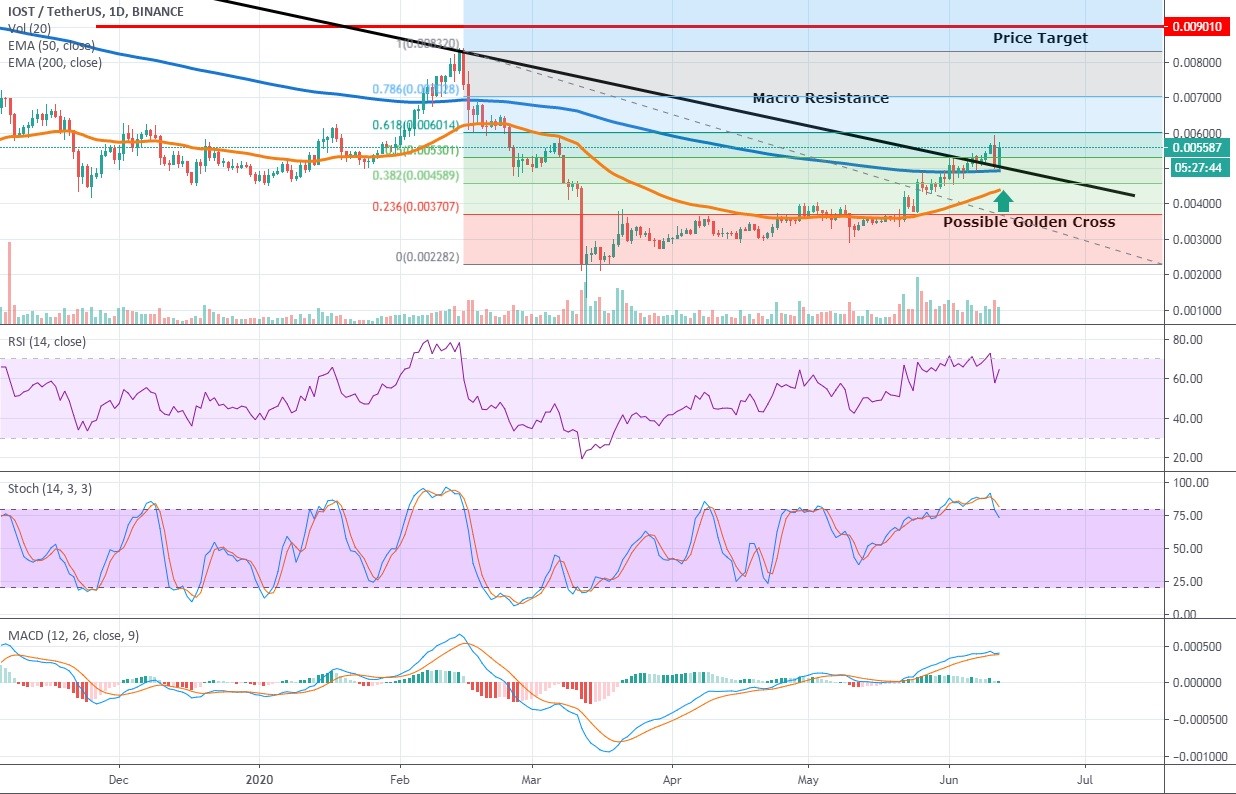 Please note that unlike what we saw in many other markets, here the 50 EMA and 200 EMA haven’t actually formed either a death or a golden cross yet, which had tricked so many traders at the peak of the last bull rally. But as of now, the moving averages show the proclivity towards making a golden cross on the daily time frame, the scarcity of which would only add weight to that pattern, but the confirmation in the form of the crossover on MACD or Stochastic would be required.

Speaking of indicators, at this particular juncture, they point at the possibility of IOST taking some time to consolidate above the trend-setting 200 EMA after more than 30 days of continuous gains, which has put the coin 68% up in the green.

It is crucial for the price to establish a foothold above the 200 EMA in order to remain within the bullish context. The indicators appear to be favoring the bullish narrative as the 14-day RSI remains at 70, thus right at the borderline of the overbought territory, even though the price has had a significant upside impulse.

MACD seems to be providing accurate signals in this market as it allowed traders to catch the last bull run precisely at its inception. Right now, MACD appears to have cut back on its pace and settled below 0.0005 for a while, although still remaining far in the bullish area, thus signifying the potential for further price appreciation. The only indicator that has already entered the overbought zone is the 14-period Stochastic, which was working well when determining the peaks and troughs in that market, and now it is also hinting at the probability of short-term consolidation before another upswing.

IOST needs that consolidation in order to retest the macro resistance it has already broken and then go up to $0.007, or 0.786 on Fibonacci, with the ultimate price target being set at $0.009.