Ever since IOST made an initial recovery after the March dump to the level at $0.007, which occurred in two stages: a smooth rise, followed by a sharp rally to the said spot, the price action became very erratic and choppy, which, on the one hand, took away from its predictability but, on the other hand, made this market very attractive for swing traders since we see the price constantly galloping up and down, offering a plethora of opportunities for both long and short traders. 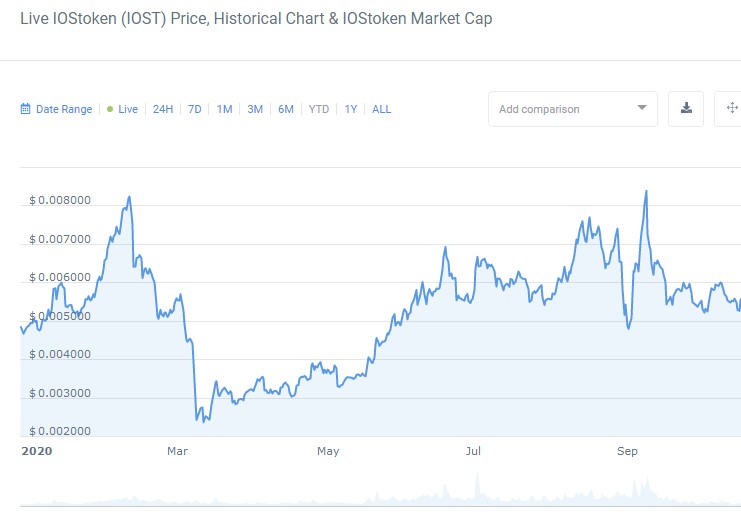 The bears are likely to take another shot at IOST

But while IOST provides for a very adventurous trading experience, it certainly brings some frustration to long-term holders as its performance is far from being an impressive one. In a year, the coin that supports the blockchain infrastructure for the future IoT, gained only 33.1% against USD and lost 21.3% to Bitcoin (BTC) and as many as 46.2% to Ethereum (ETH). Furthermore, it’s all-time ROI has dropped to -77%, mainly because this particular DPOS network, although being based on solid technology, has proven unable to put up with the competitors, among which are Ethereum, EOS, and TRON, which, in turn, has had a negative effect on the overall token economics and price, by association.

As of this writing, the value of IOST stands at $0.0054 after the 2.18% price decrease in the past 24 hours, which fell in line with the overall pullback across the entire market that had 70% of losers.

The average trading volume hasn’t been fluctuating that much throughout the past four weeks, keeping within the boundaries between $22 million and $34 million that corresponds with the ongoing period of consolidation, during which IOST was locked between $0.0051 and $0.006.

The year-to-date chart above shows that IOST is persistently making lower lows alongside higher highs, a clear broadening wedge pattern that would either be resolved to the downside if the market turns bearish for the remainder of the year, or shoot up to $0.008 in an effort to extend the pattern further.

The price action on the weekly time frame clearly demonstrates the increasing selling pressure that began in the first week of September, after a short burst to $0.009. 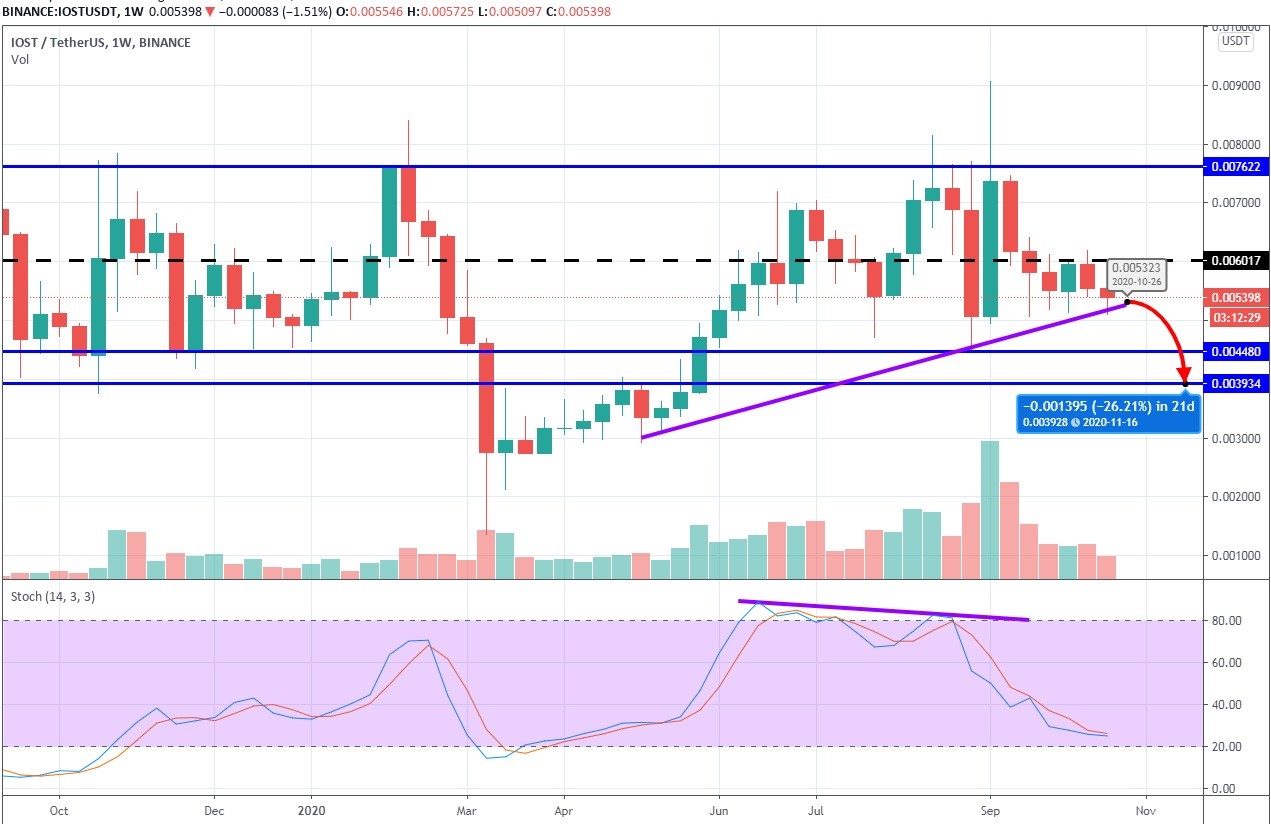 Stochastic has drawn a clear bearish divergence, while the indicator itself is moving aggressively downhill, signaling about the approaching price decline, presumably to the established support level at $0.0039 that would constitute another 23% drop, but will keep it within the confines of a broad range between $0.0039 and $0.0076, though at this point, the resistance is likely to be at $0.006. 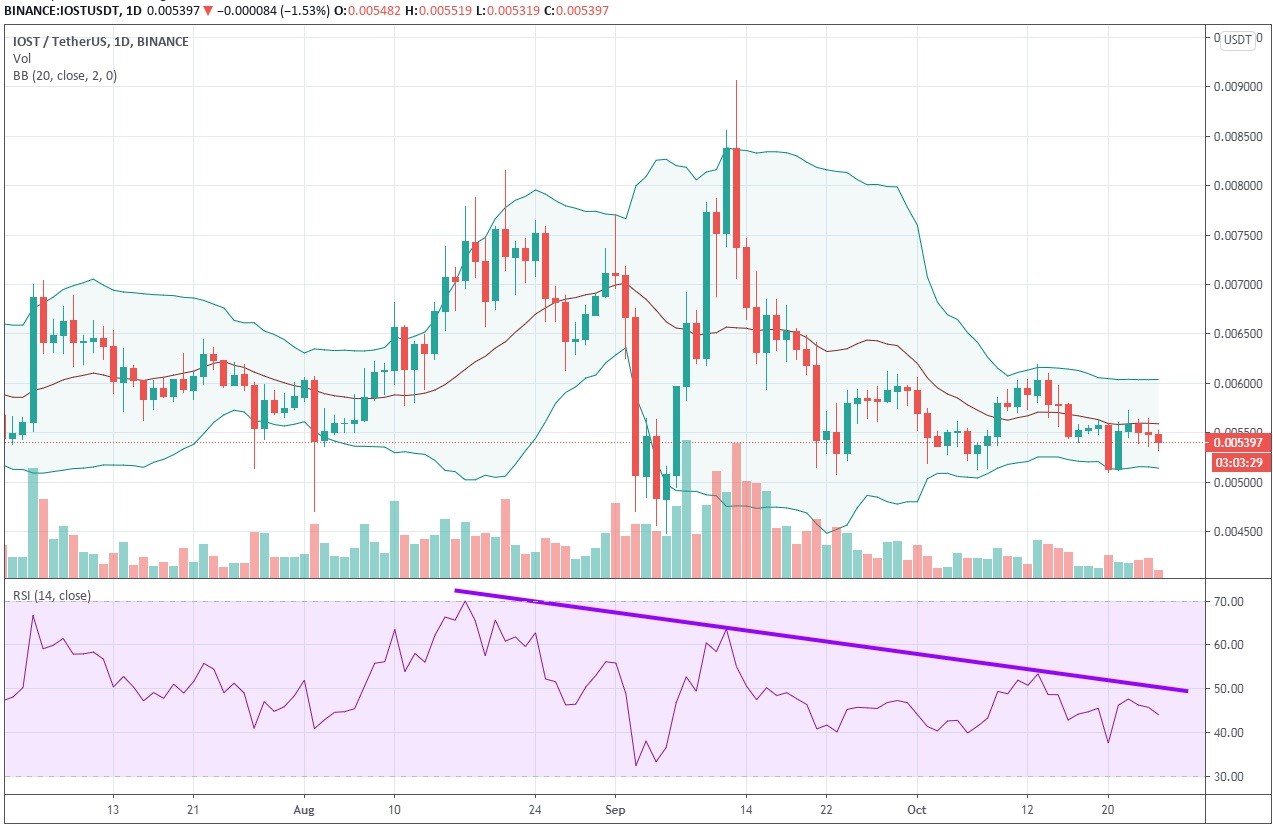 The developments on the daily time frame further support the notion of the looming price drop since we see another bearish divergence, this time, formed by the 14-period RSI, that has begun to play out since the second part of September, and is likely to be exacerbated in the next two weeks as IOST is about to resolve the Bollinger Bands squeeze, most probably to the downside.