Having absorbed the damage sustained on the 12th and 13th of March, the cryptocurrency market has begun rising on its knees and getting capital flowing back into not only Bitcoin but also a host of other coins, infusing it with enough bullish energy to display the overall growth for the third week in a row.

The top cryptocurrencies enjoyed the largest share of the pie, of course, but the lesser ones are also being given a chance to nibble on the liquidity and show some nice gains to the relief of the traders who lost their sleep, expecting the market to fall into the abyss.

NULS is one of the altcoins from beyond the top 100 that has defied the expectation of an approaching demise and even showed enough vigor to climb out of the pit. Even though 2019 wasn’t the year that NULS can boast about since it finished this period with 75% in losses - 2020 has so far proved that even the average altcoins can thrive under pressure.

The week of trading as a rollercoaster ride

There is no denying the fact that purchasing and holding low-ranked altcoins wouldn’t constitute the best trading/investment strategy in the current circumstances. Nevertheless, those who had failed to exit long positions, or simply to convert the bulk of cryptocurrency portfolio into cash, must be looking for ways to recover at least a part of losses by means of different trading strategies.

Fishing out for seemingly unremarkable altcoins like Nuls - which was stacked towards the lower end of the ranking table - that for some reason have the potential to make significant gains against either USDT or BTC is arguably one of the most efficient trading tactics in present market conditions. NULS, for instance, gained over 40% against all three major currencies: 40.8% - USD; 45% - BTC; $45.5% - ETH, over the course of the past seven days.

Moreover, the 136th coin has bested Bitcoin by 11% in a span of a month, thus proving that its gains aren’t a fluke, although there is a slight probability of price manipulation since this particular currency record the overwhelming portion of trading volume on two platforms: OKEx and Binance (BTC and USDT pairs). 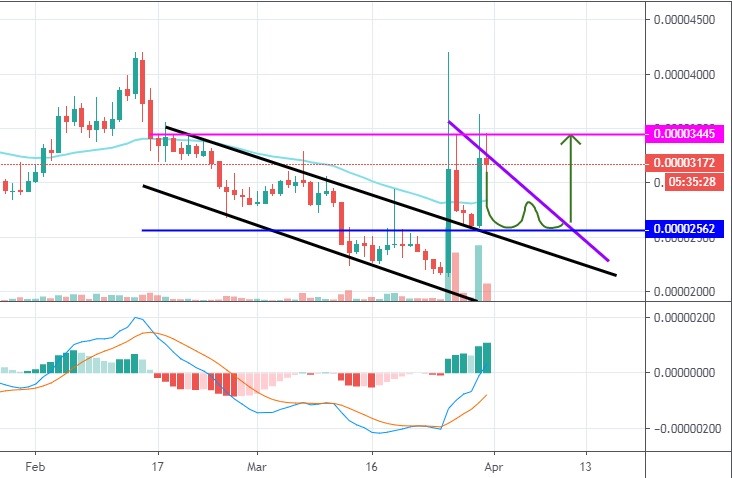 On March 26, NULS had an absolutely enormous breakout candle, with the price opening at $0.146 and closing at $0.211 on the day, accompanied by a significant spike in volume: from the previous day’s $12.6 million to $18 million. This was probably caused by the fact that on that day, the NULS tech community published the blueprint of a crucial fundamental upgrade named Nerve Network that has the potential to improve the project’s cross-chain solution significantly.

What’s also important is that NULS had made a rapid downtrend reversal, shot through the descending channel, and has already successfully retested the new support at 25 thousand satoshis a couple of times - once on the back of a very substantial buying volume.

What we can expect from NULS in the following days is the movement within the forming descending triangle, while respecting the 25,000 sats support level. Therefore, the price decrease of up to 18% is to be expected over the course of the next week. Upon that, traders could see the 4th retest of resistance at 34,000 sats with the subsequent entrenchment at that level.