NULS Is Being Tested by Macro Resistance

For the past two weeks, Bitcoin and other top cryptocurrencies were trapped in the range, causing their price action to be uninspired. The only exception was the 8% mini-dump on June 11, upon which the market kept on consolidating.

In these dull times, traders should be looking for altcoins that provide the opportunity for a quick long or short play, and NULS shows all signs of being the market that is about to make another serious move, as the coin has already been exploding to the upside.

During the last 30 days, the currency which represents the project that declares the goal of creating an ultra-customizable blockchain infrastructure to facilitate the mass adoption of this technology by business entities, improved its USD value by an incredible 80%, while its run in the pair with Bitcoin was more amazing as NULS has been acting confidently against the dominant cryptocurrency and outpaced it by 85%. 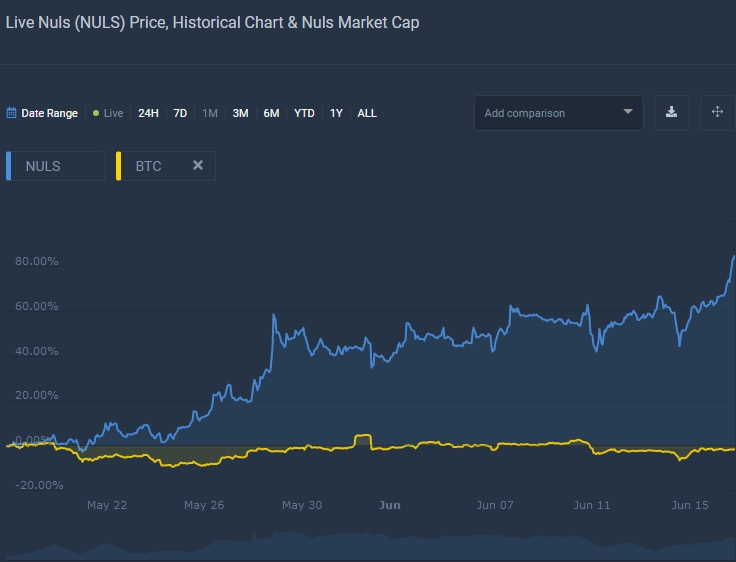 Such a sizable price burst could be explained by the expectations concerning the 20 industry solution and the overall finalization of building the NULS blockchain ecosystem that the team promised to deliver in Q2 of 2020. Plus, the team has recently established a strategic partnership with BitMart, under which the exchange is to become a strategic investor in the blockchain infrastructure, and NULS will participate in its exclusive trading program dubbed the Shooting Star.

Close to making the year high

As of writing, the price of NULS is $0.39, established after the 7% increase on the day. However, that is exactly the point where it could be strongly rejected by the bears who should be interested in protecting the previously established lower high at $0.43 to keep the downtrend, or at least the consolidation, intact. 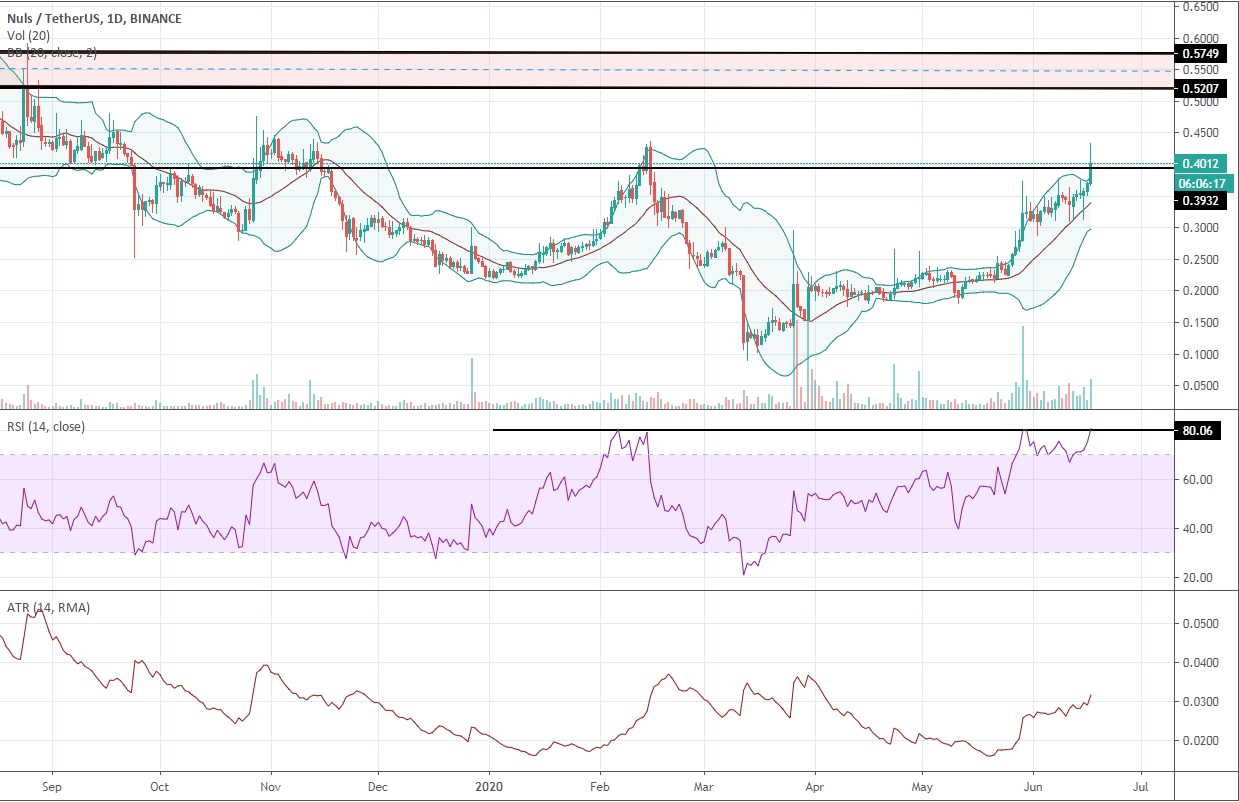 As for the bulls, they seem to be eager to crack the resistance and establish support above $0.43, or even $0.45, by demonstrating a huge cluster of buying volume, whereas the volume itself has the tendency to increase, which is the definite sign of the resistance breakout.

Both ATR and Bollinger Bands are pointing at the continuation of volatility, as the former has been moving upward ceaselessly since the second part of May, having already beaten 0.003, whereas the latter appears to be making a quick squeeze, during which the price could actually begin to range for a few days.

However, there are also some worrying signs for those inclined to make a long play since the 14-period RSI has already hit 80 that has proven to be the area where the price has been rejected during the current cycle.

All things considered, we predict that NULS won’t be able to rise decisively above the resistance at this point, and will face a minor retracement of no more than 12%. Immediately thereafter, the altcoin could have a powerful upside impulse that should take the price to the channel of frequent historical interaction between the levels $0.52 and $0.57.

Executing the same plan against BTC

The situation in the BTC pairing on the daily time frame is very similar to that in the USDT market. NULS took off in the middle of May and is now testing the important resistance at 4,200 satoshis. 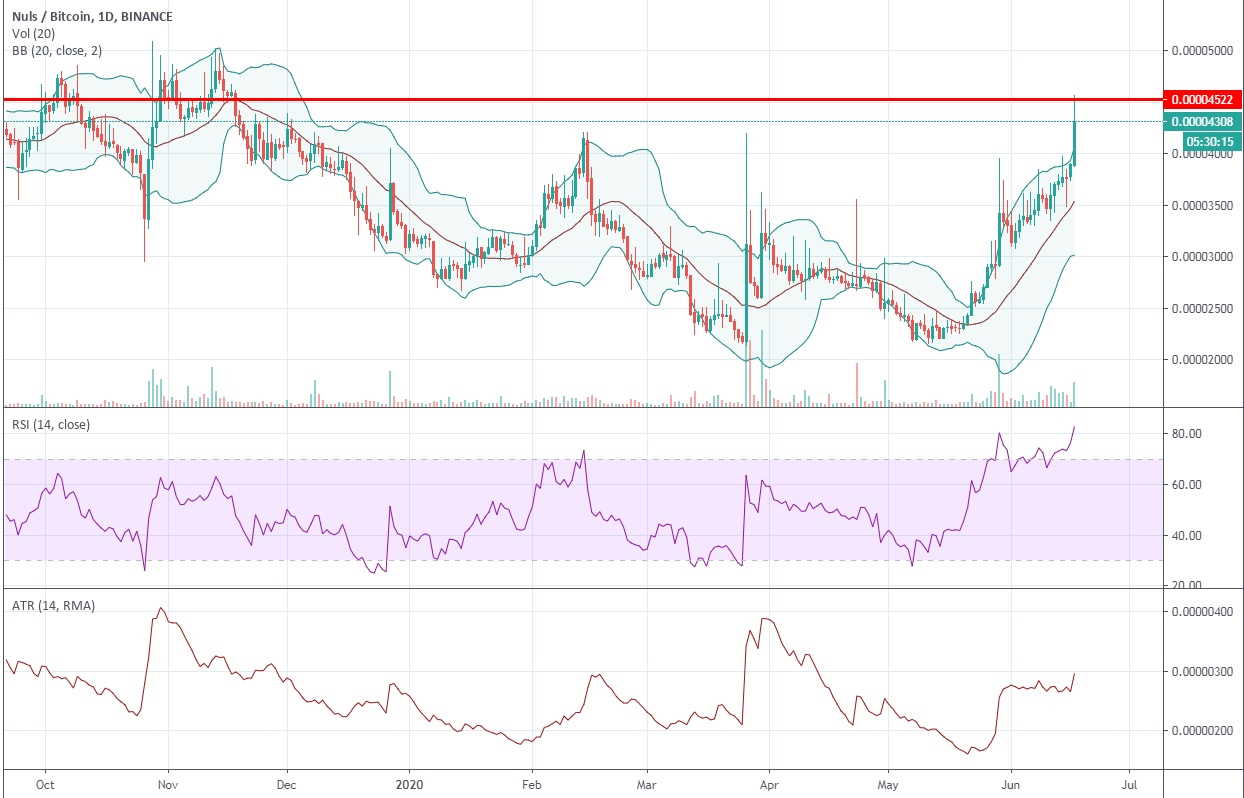 The only difference is that the trading volume here is on the slight decline, while the RSI shows that NULS is already overbought, which could also lead to a retracement.