India is a country with one of the most active crypto communities - we regularly see dozens of blockchain projects that feature Indian specialists emerge in this space. But when it comes to crypto regulation, India’s government has been arguably the most contra-crypto one, even among the authoritarian ones like that in North Korea.

In April 2018, the Reserve Bank of India went as far as banning all operations related to cryptocurrencies, effectively barring its citizens from engaging in crypto trading for years, which also had a negative effect on the blockchain projects out of this country.

But just a few days ago, the officials have decided to soften their stance and lifted the ban - an act that has had a positive impact on the crypto market in general, but most notably, the blockchain projects of Indian origin, such as Matic Network, which introduced its ERC-20 compliant token MATIC in April of 2019. The price reacted immediately - in just four days, MATIC grew in value by 48%, right in the midst of the raging correction that still lingers in the market. 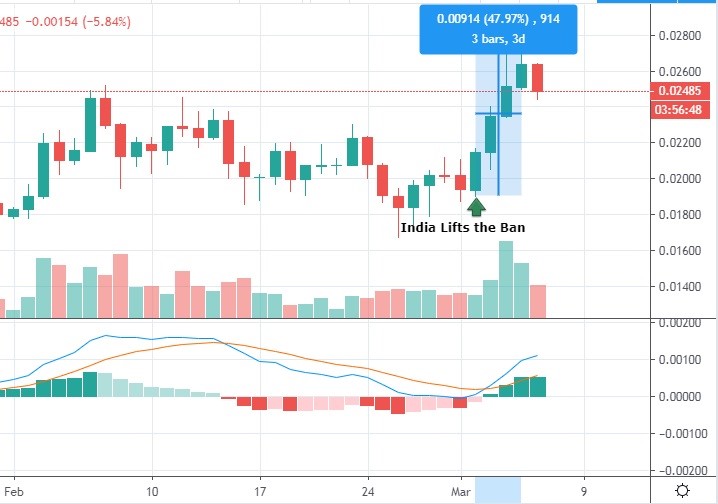 The relief from the ban provided a much-needed liftoff for the MATIC, though it still has a long way to go before the coin fully recovers from a massive 74% crash that occurred on December 9, 2019, after an equally strong bull rally that saw MATIC go up by a staggering 224% in just over two weeks. Nevertheless, the initial investors in this coin should be satisfied as it’s all-time ROI currently stands at 450%, which is actually a splendid result for a currency that emerged in the country where crypto trading was banned.

Matic Network is presently rated 79th on Coinmarketcap, though we expect the coin to climb higher due to the regulatory relief that should attract investors’ attention to this project. Moreover, the currency is backed by some interesting fundamentals, focused on providing means for creating dApps, along with the solution for off-chain computations and provision of top-notch network integrity through the Plasma framework. MATIC has an average daily trading volume of $40 million, which is a very decent number for a coin outside the top 50.

The behavior of MATIC on the charts

Starting off with the weekly time frame, where Matic Network has bumped into a strong historical resistance at $0.027, which had been broken only once, but then was brutally forced down by the bears in a single weekly engulfing candle. 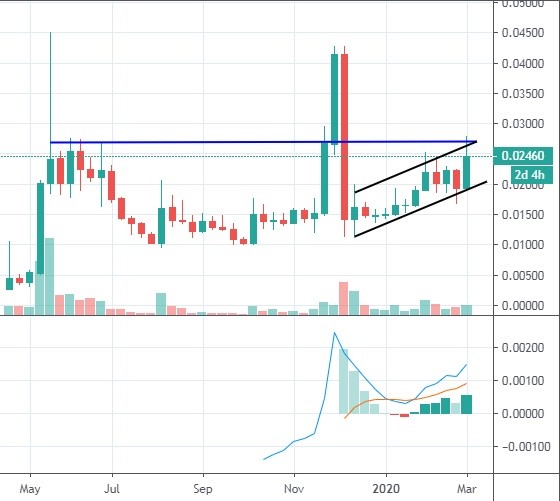 Since late 2019, MATIC has been moving accurately in an upward trend, so there is a probability that the weekly candle after the next will breach the $0.027 resistance. 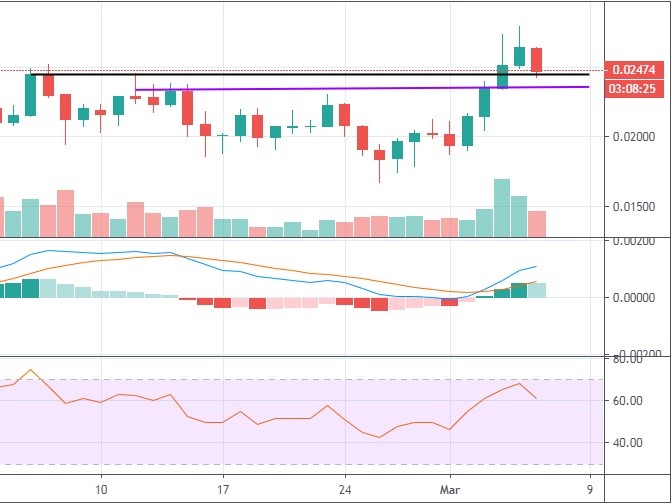 On the daily time frame, though, the price appears to have already entered the retracement phase, which is a healthy behavior after four days of green in a row. Taking into account that MACD is rising above zero, while the RSI hasn’t even dipped its toes in the overbought waters, MATIC has all prerequisites needed for a short retracement to either $0.24 or $0.23, which should be followed by another explosive move to the upside. Watch out for these levels if you want to go long on Matic Network.