Presently, Matic Network (MATIC) is one of those altcoins that have come to life because of its foundation that is built on the Ethereum network. According to our research, practically all coins out of the top 100 that have the ERC-20 standard at their core - MATIC is currently ranked 95th - were significantly bullish during the past two to three weeks.

MATIC is not shy to display its upside potential

As for Matic Network, 99% of those who hold the coin are making money right now as it's all-time ROI now stands at 575,1%, while the last year's gains amount to 116% against USD and 86% in the pair with Bitcoin. 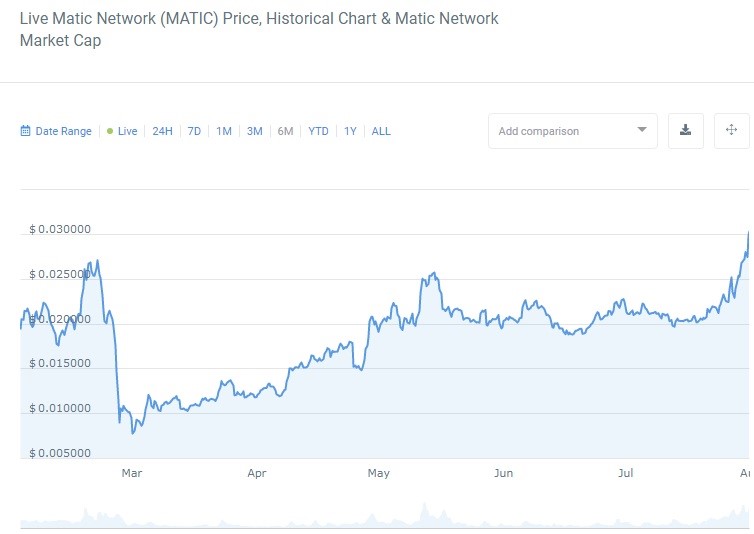 MATIC has been particularly active over the course of the last seven day, as you can see on the chart above, when it gained 36.3% against USD and 34.2% in the BTC market in one large upswing that left the price in close proximity - 31% to be precise - to the historical high at $0.045 that was established last December. Obviously, when and if the price surpasses that level, traders should expect more explosive growth on the part of MATIC, but ideally, the altcoin would have to go through a short retracement phase in order to assure traders that the trend is developing in a healthy fashion. 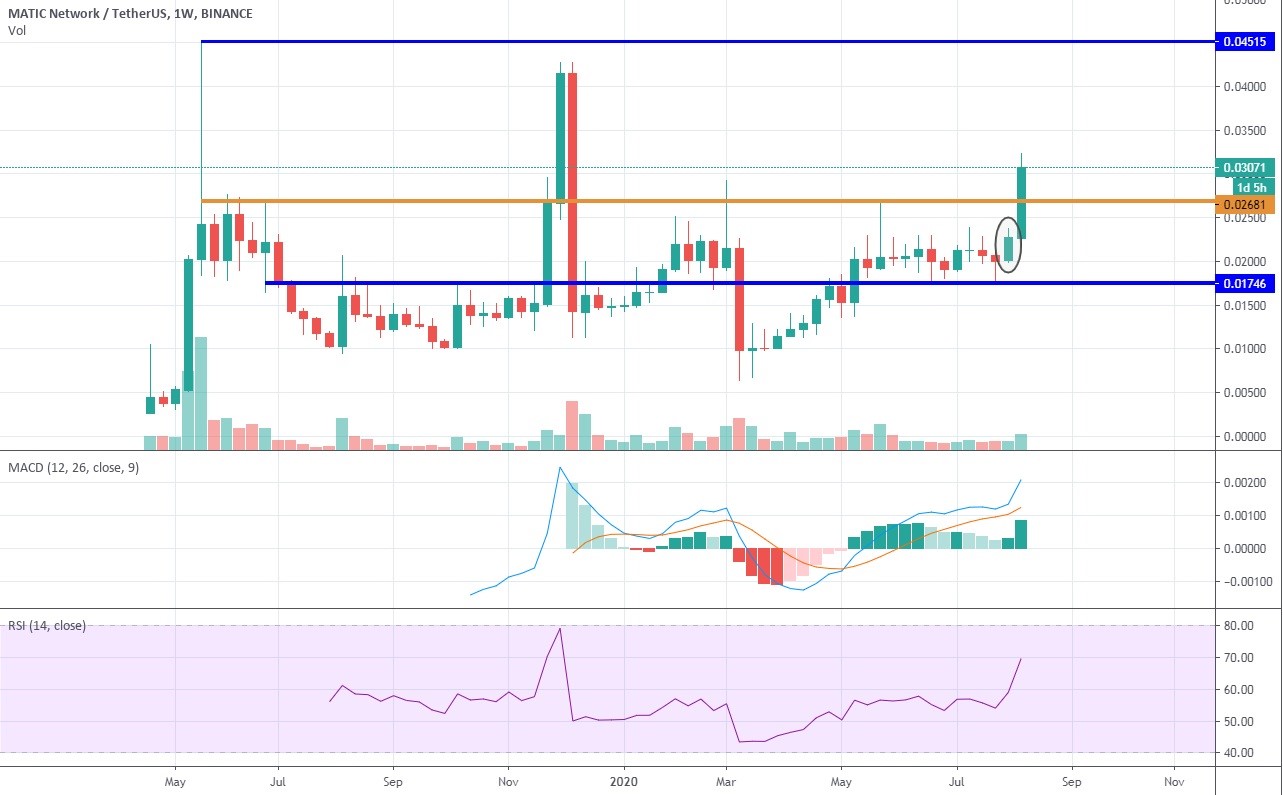 But as the weekly chart above shows, MATIC is in the midst of what appears to be the most potent rally since that of the fall of 2019 as it began with a large engulfing bullish candle and then dashed past the last bearish stronghold at $0.026, thus leaving no levels for the sellers to cling on to, so at the lack of any negative external factors, MATIC could pull through the remaining 31% relatively easily.

Both MACD and RSI are immensely bullish on this time frame, accompanied by the increasing trading volume, although the course of price action in the coming weeks will be determined by the opening position of the next weekly candle. Should the cryptocurrency market, in general, remain bullish, there is a high probability that MATIC will reach the historical high in the next five to ten weeks. 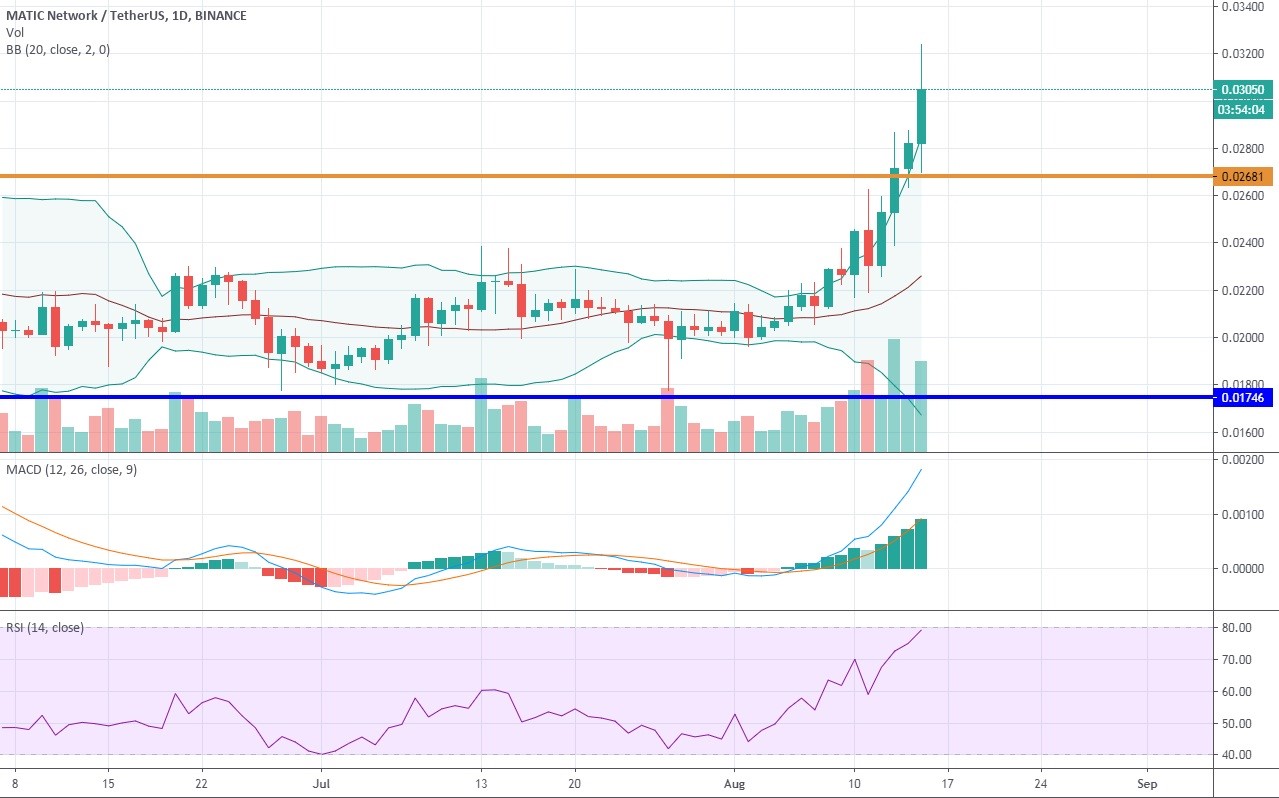 Upon switching to the daily time frame, we discover that Matic Network could be nearing the end of the ongoing rally that took the price above $0.026, along with the period of high volatility, since we notice how extremely extended the Bollinger Bands are right now, which always results in the price retracing to the middle line of the bands, although in that case, the pullback could be limited to the newly-established support that has already been tested and confirmed. However, try not to jump the gun here and start shorting MATIC, because the trading volume is on the rise again, while MACD and RSI are staying loyal to the bullish side.

To summarize, Matic Network displays all the prerequisites for becoming another altcoin that will beat its historical price record in the near future, although it may go through a couple of retracement stages beforehand. In the current situation, we would recommend resorting to a tactic of trailing stop-loss to try and catch the top of the upswing.