Harmony (ONE) Prepares To Make the Higher Low

Harmony is a project that has a goal of creating a fair digital economy with the help of the proprietary blockchain that is characterized by the immensely fast block producing capacity, as it requires only 8.18 seconds to produce a block. Moreover, its ecosystem uses sharding (4 shards per 1,000 nodes) and staking, a solution that the Ethereum Foundation is struggling to implement to obtain better scalability of the Ethereum network.

They also claim to have achieved superior decentralization properties thanks to the application of the Effective Proof-of-Stake (ePoS) consensus algorithm, which also has a double-sign slashing feature.

ONE is the platform’s native cryptocurrency that is being placed 148th in global rankings. Project’s market capitalization stands at $29,1 million, which is low to pose a serious competition to Ethereum, yet sufficient enough to allow the team to adhere to the roadmap strictly.

ONE is traded mostly on Binance and MXC that take up to 80% of the overall trading volume. Over the past 30 days, the average trading volume of Harmony has been fluctuating from $4 million to $14 million, with high volume days providing fuel for the bullish price action.

The present situation in the market and Harmony price prediction

As of writing, Harmony is traded at $0.0046 per coin, on the back of the 16% price increase in a day. Right now, the altcoin is running bullish, having acquired 41% of additional USD value over a month, and outperformed Bitcoin by 43% and Ethereum by 20.4% over the same period of time. 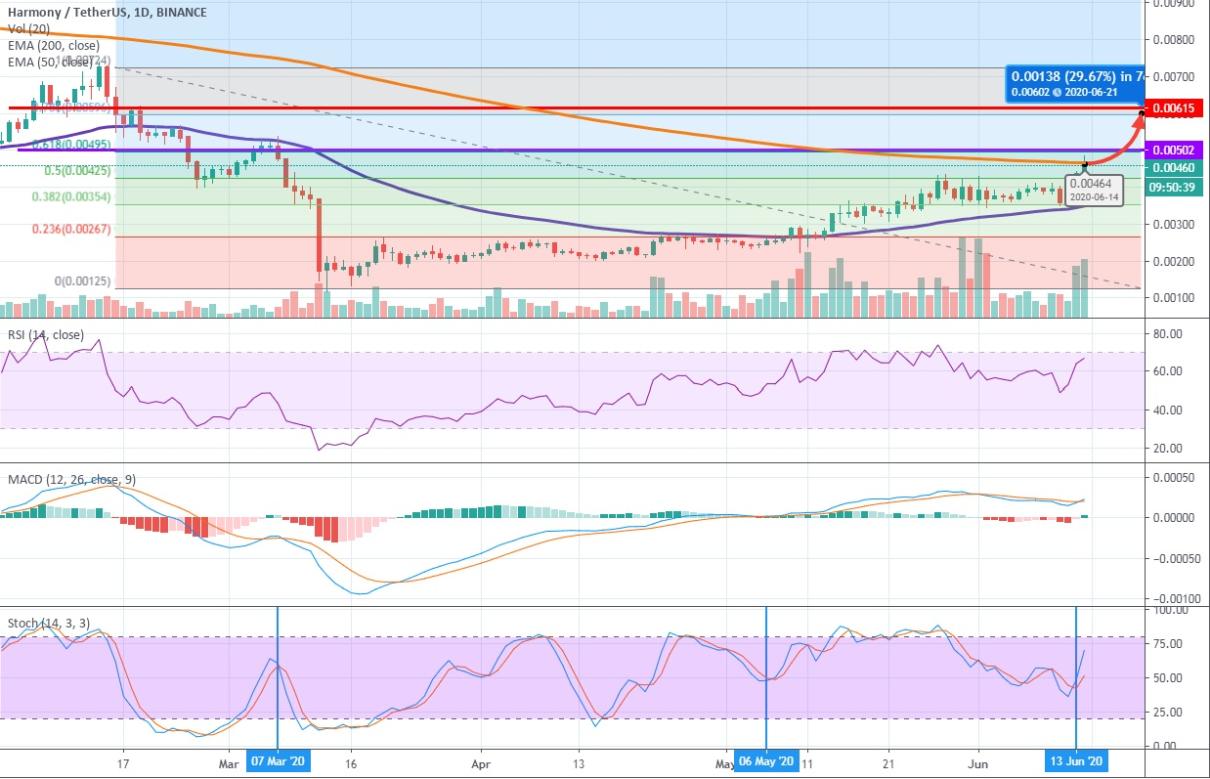 It took Harmony 56 days to get out of the mire in which the price found itself after the March cryptocurrency market crash. During those days, the bulls have accumulated enough strength to start pushing the price above the 50-day moving average on May 9.

Stochastic has predicted the initial bullish move accurately, as well as the looming price meltdown on March 7. Therefore, the signals coming from that oscillator on the daily time frame can be deemed as reliable. In its last move, Stochastic performed a bullish crossover at 50, which signals about the upcoming push from the bulls that would take the price above the 200 EMA, thus confirming the overall bullish sentiment in this market.

Similar behavior has been displayed by MACD, which has also proven to reflect the market rather impeccably. The bullish crossover above zero puts this indicator in agreement with Stochastic with regard to the nearing penetration of the 200 EMA, during which the price will encounter the resistance at $0.005 that happens to converge with the 0.618 Fibonacci retracement level. The convergence usually makes it difficult for the bulls to breach the resistance, but if achieved, the bullish move will get an additional momentum that may catapult the price to $0.00615, the resistance level at the peak of the last bull rally.

But that could be the last upswing that ONE makes before a deep correction that is likely to occur because Harmony still remains buried deep in the downtrend. The determined price target is likely to be the rejection point, upon reaching which the price would roll back considerably.