Bitcoin is down 2.5% over the past week, ending near $29,200. Ethereum lost 10.6%, while other leading altcoins in the top 10 fell from 1% (Polkadot) to 14.8% (Solana). The total capitalisation of the crypto market, according to CoinMarketCap, sank 2.4% over the week to $1.26 trillion. Bitcoin’s dominance index jumped 1.3 points to 44.9% over the same time due to the better performance of the first cryptocurrency. 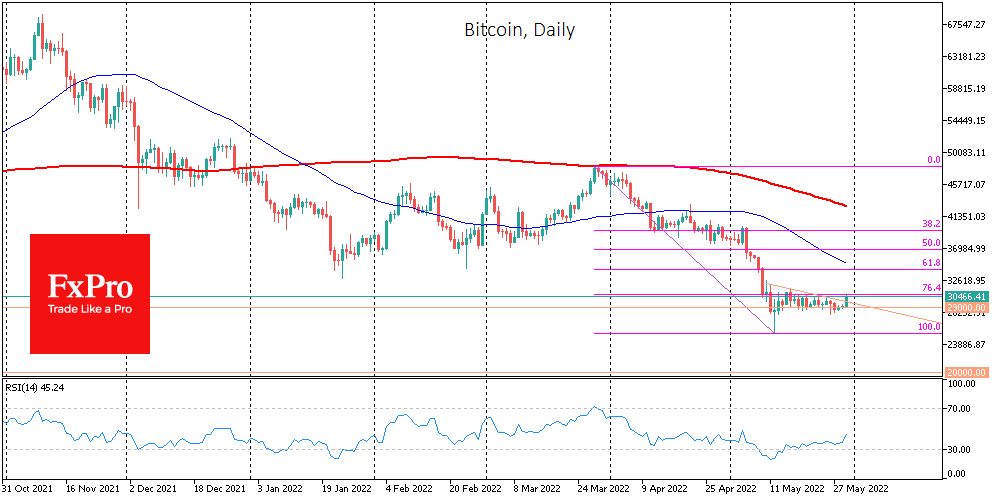 The cryptocurrency fear and greed index was down to 10 points by Monday. However, this drop does not consider the positive market performance in the early hours on Monday. Bitcoin has closed lower for eight consecutive weeks, the longest sell-off streak in the first cryptocurrency’s existence. But the last two weeks have been very tentative declines.

On Monday morning, BTCUSD surpassed the $30K mark again and returned to last week’s highs, breaking above the downside resistance line in a strong move. It will be premature to talk about a bullish counteroffensive until Bitcoin gets above $30.6K, its horizontal resistance line since mid-May. Renewed risk appetite in global markets is fuelling hopes of a turnaround. Divergence in equity and cryptocurrency dynamics was conspicuous last week, highlighting the weakness of the crypto market.

Dan Held, business development director at crypto exchange Kraken, believes the current crypto crisis is not as severe as previous ones, as institutional players have entered the market in recent years and increased market liquidity. We would add that thanks to the expanded crypto market capacity, we haven’t seen as much of a surge in the bull cycle of 2021 as we did in 2013 and 2017, which explains the not-so-high ‘winter’ losses. MicroStrategy CEO Michael Saylor said he will always buy bitcoin. According to him, BTC is the most reliable asset in this very volatile world. Bill Miller, head of investment firm Miller Value Partners, called bitcoin an effective means of accessing financial services regardless of military and economic situations.

Regulation of cryptocurrencies would help with the crisis in the crypto market, according to Deutsche Bank.