Bitcoin has added 2% in the past 24 hours to $21,400. Ethereum added 4.6% to $1640, while top altcoins added between 0.9% (Dogecoin) and 4.4% (Polkadot). Total cryptocurrency market capitalization, according to CoinMarketCap, rose 2.2% to $1.03 trillion overnight. The Cryptocurrency Fear and Greed Index fell 3 points to 25 by Wednesday and went from "fear" to "extreme fear".

Unlike stock indices, Bitcoin has not fallen but has appeared as if it is disconnected from the market, having reached an equilibrium between the sell-off lows of late July at $20.5K and $22.5K.

The technical picture looks like a consolidation before a new downward momentum, potentially to the lows near 17600. BTCUSD could update that low if the decline gets caught up in the storm of falling stock markets. But it is too early to bet on this. 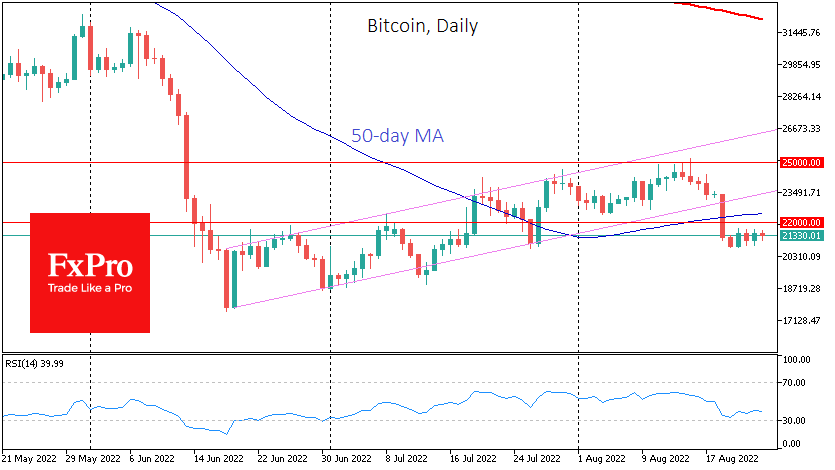 CoinShares strategy director Meltem Demirors believes that because of the holiday season, we should not expect significant changes in the cryptocurrency market until the end of September. According to SkyBridge Capital CEO Anthony Scaramucci, bitcoin cannot yet act as an asset to hedge inflation as adopting the first cryptocurrency is not enough.

According to Arcane Research, Bitcoin could become one of the world's leading power consumers by 2040.

Developers of the Dogecoin Foundation have reported that a DOGE-ETH bridge will be launched by the end of the year to move DOGE from the Dogecoin blockchain to the Ethereum network and back again.

Has the crypto market first felt the risk appetite?

The crypto market has taken a hiatus from the sell-off

Cryptocurrencies: Main Week of the Calendar

Is Bitcoin heading to $15K? Why are the markets suddenly pulling back?

Bugatti Sports Car for 1 BTC: a Pipe Dream or Reality?