Bugatti Sports Car for 1 BTC: a Pipe Dream or Reality?

Among the many questions that concern the crypto community, two main ones can probably be distinguished: 1) Who is Satoshi Nakamoto? and 2) How much will bitcoin be worth? The first of them will be answered by White Paper Films, which announced the start of work on a documentary film dedicated to the personality and mysterious disappearance of the creator of the first cryptocurrency. (By the way, you can find a lot of interesting information on this subject on the NordFX broker website). As for the second question, as usual, we will look for answers to it in this weekly review. 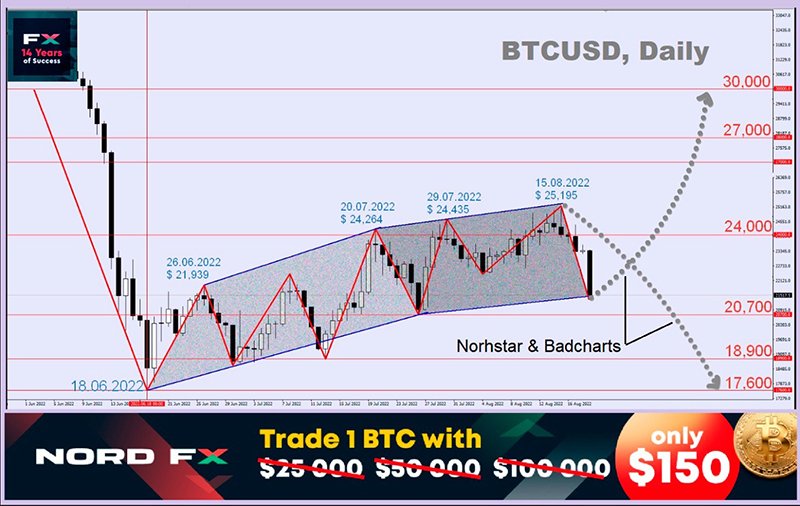 As of this writing, Friday evening, August 19, the total crypto market capitalization is $1.028 trillion ($1.155 trillion a week ago). The Crypto Fear & Greed Index fell 9 points in seven days from 42 to 33 and came close to the Extreme Fear zone. BTC/USD has gone down sharply again and is trading at $21.095. There are several reasons for this fall. First, the intention of the Fed to continue raising rates, which became clear from the minutes of its last meeting. Secondly, there is strong downward pressure from the fever in the stablecoin market. First, aUSD was compromised, and HUSD, the token of the Huobi crypto exchange, lost its peg to the dollar last week. If we add to this the bankruptcy of a number of cryptocurrency funds, the pessimism that reigns in the market becomes clear.

Well-known analyst and DataDash founder Nicholas Merten noted that bitcoin and ethereum are showing signs of weakness despite their rising prices in recent weeks. According to Merten, the fact that the recovery of the stock market is ahead of the recovery of crypto assets suggests that the latter may not have much strength left to continue the rally. If cryptocurrencies sell out faster than stocks during a downtrend, then they should have recovered faster. But there is no such recovery at the moment.

Another crypto strategist, nicknamed Capo, believes that “there is a chance to see another attempt by the main cryptocurrency to storm the $25,400-$25,500 range.” However, according to his colleagues at Norhstar & Badcharts, there is a possibility that bitcoin could start to drop sharply to $10,000-$12,000. They explained their assumption in an interview with Kitco News as follows: “According to the chart, the price of bitcoin is in an inverted arc, opposite to the Cup pattern… There are a number of technical analysis methods that increase to 70-80% the probability that the price of bitcoin will make new lows of $10,000 -$12,000 and there's about a 20% to 30% chance it will go up." In the event that the bitcoin rate goes up, according to Norhstar & Badcharts, it could reach $29,000-$30,000. According to them, this is the maximum level that the value of BTC can rise to before it starts to fall. “We are either already at local peaks or very close to them,” Norhstar & Badcharts says.

As usual, influencers who have invested heavily in bitcoin are trying to knock down the wave of pessimism. They continue to convince everyone and everywhere of the fantastic prospects of the flagship cryptocurrency. For example, Anthony Scaramucci, former director of communications at the White House and now head of the investment company SkyBridge Capital, recalled in an interview with CNBC the limited issue of bitcoin of 21 million coins, which will lead to “shock demand with little supply.” Scaramucci believes that the first cryptocurrency can show unprecedented growth within six years. “If we're right, if bitcoin goes to $300,000 it won't matter if you bought it at $20,000 or $60,000. The future is ours. And it will happen sooner than I thought,” he says.

The former director of the White House is echoed by the former head of MicroStrategy Michael Saylor. Recall that this company acquired 129,698 BTC under his management. Despite the current unrealized huge losses on these trades, Michael Saylor is confident that the purchase of bitcoin as a reserve asset was justified, and the asset will prove to be reliable in the future. “We […] got into the lifeboat of the first cryptocurrency with the understanding that we would be tossed in the ocean, but we would not drown and would appreciate this step over time,” said Saylor. According to him, the volatility of cryptocurrencies will only affect short-term investors and public companies, so bitcoin is not for everyone. “The investment should be for a period of at least four years. Ideally, this is the transfer of wealth from generation to generation. The metric that confirms this is the four-year moving average,” he explains.

And at the end of the review, here is the statement of another bitcoin maximalist. “I still hope to buy a Bugatti for 1 BTC,” said Jesse Powell, CEO of the Kraken crypto exchange. Given that the cost of one Bugatti sports car can exceed $5 million, it takes very little to fulfill this dream: “just” to wait for bitcoin to rise in price by 250 times.