Bitcoin formally closed last week lower, ending it near $21,100. At the time of writing, the upside momentum has built up, taking the price to 21,800, the upper end of last month's consolidation range. Ethereum jumped 14.1% last week and is adding another 6.7% since the start of the day on Monday, rising to $1430. Finding itself one step ahead of BTC this time, ETH broke the upper bound of last month's trading range on Friday. The second cryptocurrency's steady rise underscores the heightened demand for risk among crypto enthusiasts.

Leading altcoins have gained in the last 24 hours, ranging from 1.8% (Dogecoin) to 16% (Polygon). The total capitalisation of the crypto market, according to CoinMarketCap, rose 9.5% over the week to $998bn. Bitcoin's dominance index fell by 1.1 percentage points to 41.7% over the same period.

The Crypto Fear-and-Greed Index was unchanged for the week, returning after falling to 24 points (extreme fear). By Monday, the index was down to 20, but recent market dynamics suggest the market is set to leave "extreme fear" territory. 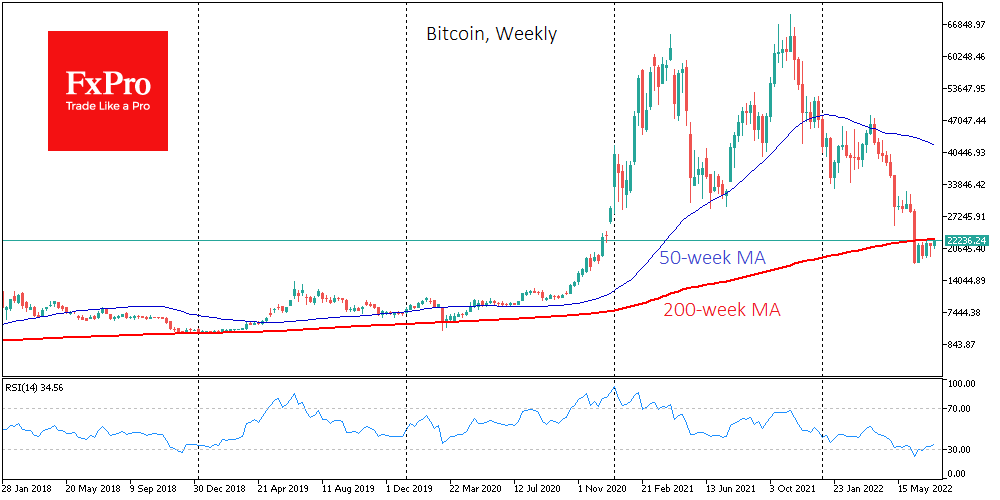 Bitcoin rebounded in the second half of the week from all its early declines. BTC has been consolidating below its 200-week moving average for almost a month, now running around $22,550. The first cryptocurrency cannot yet move significantly away from the $20,000 level (the high of the previous cycle). Optimists can look for a sequence of higher local lows over the past four weeks. Ethereum showed notable gains after ETH developers approved the blockchain migration to PoS for September 19, 2022. Ethereum broke above its 200-week average late last week, which could spur early buyers to trade on technical signals.

And we also draw attention to increased investor interest in blockchain networks, as seen in the outperformance of Ethereum, Solana, Polygon, and Avalanche during the past week. In parallel, the NFT market continues to fade. This can be described as investors betting on long-term projects instead of collecting short-term speculation.

Bloomberg draws attention to the weakening correlation between bitcoin and US stock indices, which has fallen to its lowest levels since January. If BTC's dependence on the stock market weakens in the coming weeks, the expert community will discuss bitcoin as "digital gold" again. 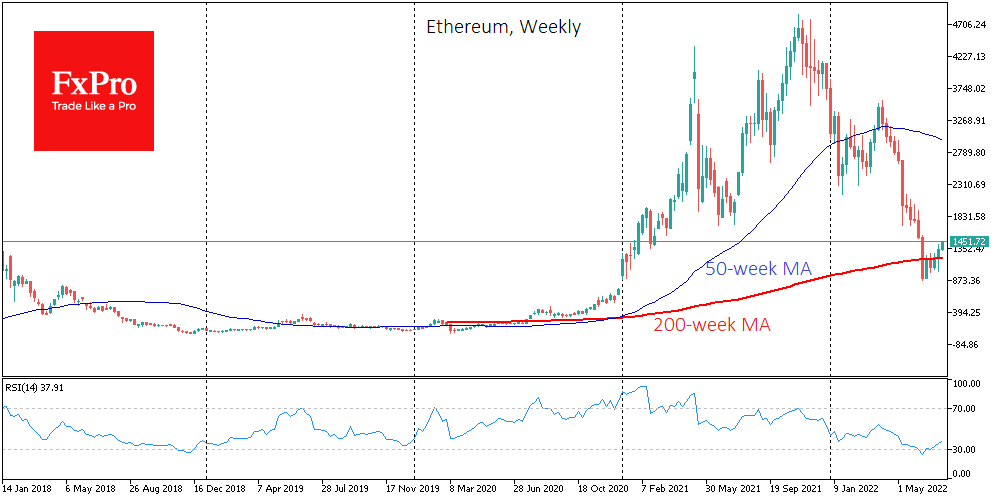 According to CryptoCompare, cryptocurrency spot trading volume fell to its lowest since June 2020. Fairlead Strategies estimates that the bearish phase of the market could drag on for several more months. The UN has recommended that developing countries ban cryptocurrency advertising and require all cryptocurrency wallets and exchanges to register with regulators.