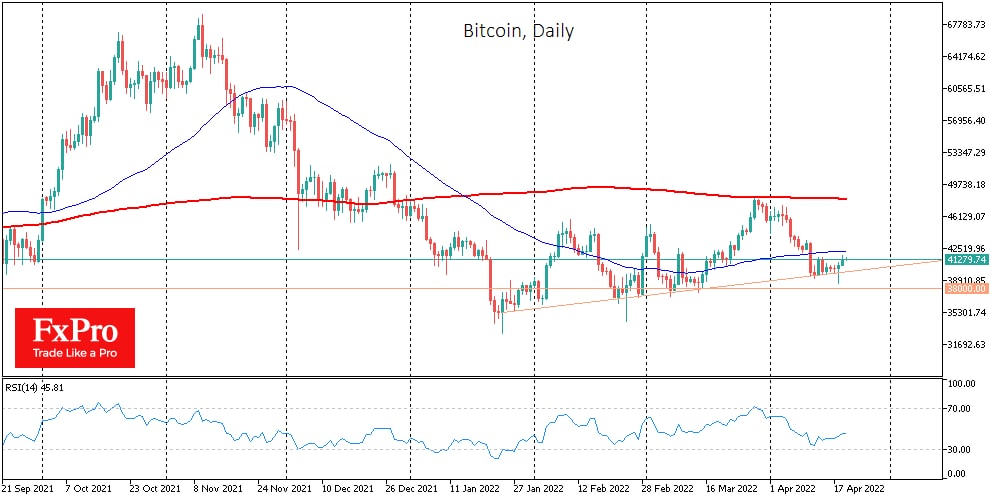 Bitcoin's dominance index was little changed, remaining at 41.0%. By Wednesday, the Cryptocurrency Fear and Greed Index remained at 27 points (fear). Bitcoin on Tuesday tested 8-day highs above $41,700 on the back of rising US stock indices, which strengthened for a second straight day.

Correlation between BTC and the Nasdaq Composite Index has been highest since July 2020. Terra (LUNA) gained 5.5 per cent as Terra USD (UST) moved up to third place in terms of capitalisation among stablecoins.

Chamath Palihapitiya, CEO of Social Capital and Virgin Galactic, said Solana (SOL) could capture market share in traditional financial services by challenging Visa and Mastercard. SOL is up 4.6%. The creators of the largest anonymous cryptocurrency, Monero, have confirmed that a 15th network hardfork is set for July 16.

Jack Mallers, CEO of payment service Strike, said that bitcoin as a payment method is superior to all other systems. Nevertheless, it is better not to spend BTC but invest in it long-term. The US Secret Service's Office of Investigations (USSS) has disclosed that since 2015 the service has seized more than $102 million in digital assets from criminals.

The Financial Action Task Force (FATF) believes that nearly half of the world's countries are not complying with anti-money laundering and counter-terrorist financing (AML) regulations. FATF has pledged to monitor member countries, including the US, China and the European Union.