Bitcoin: too early to buy

Bitcoin is down 9.2% over the past week, finishing around $19,400 and trading near 19,000 on Monday morning. Ethereum has lost 13.3% in the last seven days, while other top altcoins in the top 10 have fallen from 8.6% (BNB) to 18% (Solana). According to CoinMarketCap, the total capitalisation of the crypto market fell 9% over the week to $865bn. Bitcoin's dominance index fell 0.3 points to 42.2%. The cryptocurrency fears index by Monday rose to 14 points. Bitcoin has been under even pressure for almost all last week. A brief bounce at the beginning of the day on July 1 was more likely due to emotional excitement from the start of a new period (month, quarter, half-year) rather than fundamental changes in the situation. This rebound protected BTCUSD from updating lows.

Nevertheless, the global picture remains bearish as stock markets show no glimpses of tightening financial conditions by central banks. On the weekly charts, BTCUSD remains below the 200-week average, having failed a timid attempt to climb higher last week. The RSI on the weekly charts remains oversold, which is a historical anomaly. Unfortunately for the bulls, this is not a sign of a better time to enter. Technically, a sustained return from extreme to norm would be a buy signal. The end of the second quarter of 2022 was the worst for bitcoin in 11 years.

Investor Michael Bury, who predicted the 2007 mortgage crisis, admits that the current market situation is only the middle of a bearish cycle for BTC and equities. Changpeng Zhao, chief executive of cryptocurrency exchange Binance, called the current collapse of the crypto market a good time to buy bitcoin for the long term. He said that if traders can hold out in the current bear market, their investments will multiply in the next bullish trend. 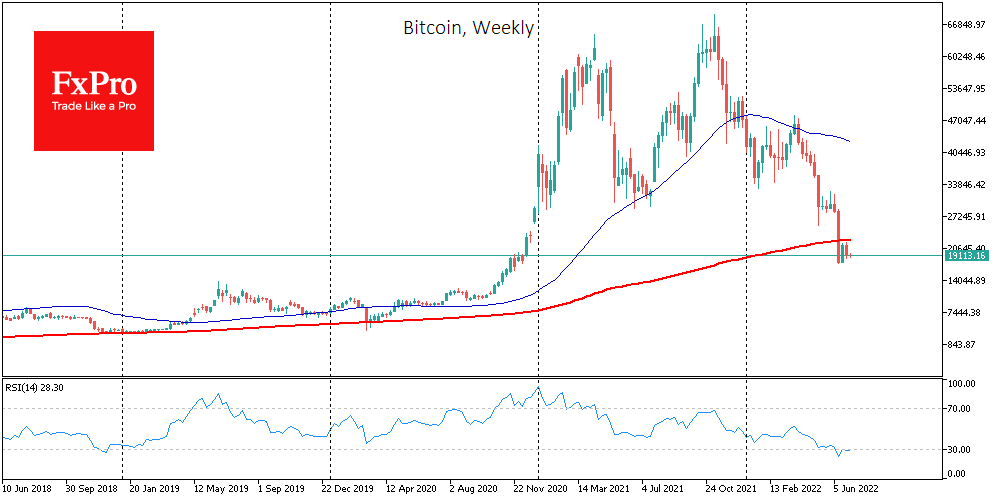 According to IntoTheBlock, retail investors have stepped up after bitcoin fell below $20,000. This category of cryptocurrency holders has been the most aggressive in buying during the recent sell-off. El Salvador continues to buy bitcoins amid a falling market. This time, the country's government spent about $1.5 million to buy 80 BTC at an average price of $19,000. On the other hand, Bank of America reported that the bank's customers investing in cryptocurrencies has fallen by more than 50% since November last year.