Bitcoin made good strides last week as it managed to cross over the important $50,000 mark, bringing Ethereum and other cryptos up with it. However, this did not last long as the price slipped again. However, for crypto enthusiasts, it has been a good week with the price of the major coin rebounded quite well. It appears as if a few Whales and older holders of Bitcoin took the chance to sell at the $50,000 mark which brought the price down, but Institutional interest is still rising. Morgan Stanley, the third-largest wealth management firm in the USA, was seen to be purchasing over one million GBTC shares.

Elsewhere, US stocks rose on Friday to close out a winning week as comments by FED Chair Jerome Powell during the annual Jackson Hole symposium managed to prepare the markets well for the central bank to pull back on some of its monetary stimulus.

While Powell said the FED is likely to start tapering its $120 billion a month bond purchases this year, he pushed back on rate increase concerns, assuring the markets that the threshold for rate hikes is much higher than for tapering, which the markets appreciated and responded in like fashion.

The three major stock indices closed the week in the green. The Dow finished up 0.9%, while the S&P 500 added 1.5% and the Nasdaq Composite gained 2.8% to clock another ATH. The 10-year Treasury yield, which ran up earlier in the week, eased slightly after the FED chief’s remarks as he made clear that interest rate hikes would not immediately follow after tapering was over.

Gulf of Mexico offshore wells account for 17% of U.S. crude production, while over 45% of total U.S. refining capacity lies along the Gulf Coast. Brent gained over 11% and Crude rose more than 10% as a result, which was the biggest weekly percentage gain since June 2020. An upcoming Sept 1 meeting by OPEC+ to discuss output for the next several months also put traders on guard as bears rushed to close off their short positions, compounding Oil’s gains.

Powell not only created cheers in the stock market, he also revived a waning cryptocurrency market as the price of BTC and the broad crypto market rebounded off his “no rate increase” comment.

The price of BTC and the crypto market initially came under selling pressure last week, with some holders observed to be selling some BTC ahead of a large options expiry on Friday, August 27. An increase in funding rates at retail-focused exchanges also contributed to fears that the market could be getting overbought. As a result, some over-leveraged positions started to get liquidated when prices failed to make higher highs, causing altcoins to post relatively significant losses of around 10%-15%. However, upon the expiry of around $1.8 billion worth of put options on Friday morning, green sprouts started to appear as the price of BTC quickly rebounded off the lows of $46,300 made on Thursday to post a high of $49,600 by late Friday night.

Some Old Hands Selling Took Price of BTC Down Near $46,000

As the price of BTC pierced $50,000 last week, some cautious old hands took the opportunity to offload some BTC, as can be seen in the diagram below where old hands increased spending. 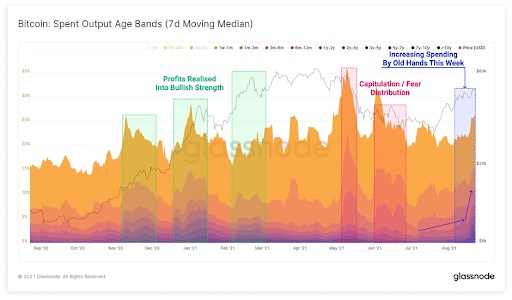 According to blockchain data, whales with 1,000-10,000 BTC have been distributing their holdings since August 9 and have continued to do so, while smaller whales with 1-1,000 BTC have been buying. Even though some selling pressure has started to come in, the uptick was not as high as that witnessed in May and June, which means that the selling pressure was not as strong.

While there was some selling pressure from old hands, whale metrics are still not showing any cause for concern, as whale exchange inflows and whale ratio remain at bullish levels. 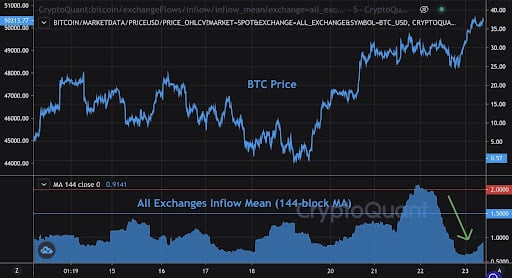 Exchange Whale Ratio and All Exchange Inflow Mean, as shown by the two diagrams respectively, are still in bullish territory. Thus, corrections, if any, when they happen, could be small since the BTC inflow to exchanges is at one of its lowest points, while exchange balances remain at low as well, meaning there is little BTC available for sale. 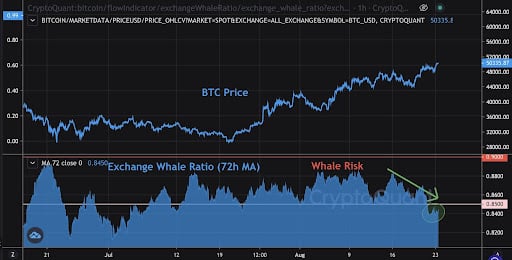 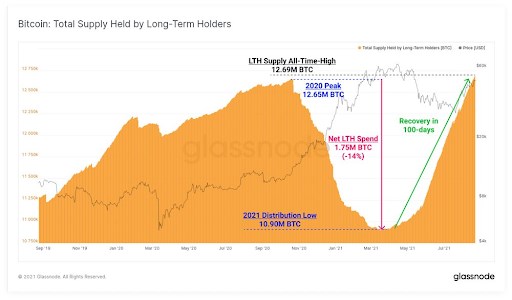 Institutional interest has continued to grow, now with even Morgan Stanley, the third-largest wealth management firm in the USA, purchasing over one million GBTC shares, worth around $40 million. This purchase of GBTC shares is coming as we pass the final week of GBTC unlock for the year, with no more unlocking of GBTC until 2022.

While some market watchers were afraid that the unlocking would pose a downside risk to BTC price, the event has failed to exert any downward pressure. In fact, the price of BTC has been rising ever since one of the biggest unlock events didn’t cause the BTC price to fall in July.

New Entrants to ETH Jumped 31% From a Year Ago

Other than BTC, on-chain data for ETH is also improving. The sum count of unique addresses holding any amount of ETH in the last 30 days has jumped 1.67%, coinciding with a 42% price rally in the same period. On a year-on-year timeframe, the unique address count has jumped 30.87%, a remarkable growth, while traders’ ETH deposits across all exchanges plunged 21.11% over the same period, from 413,772 ETH to 326,408. In the last 30 days, ETH deposits have dropped dramatically by 47.81%, signaling that many investors are expecting higher prices in the long term.

As the adoption of Ethereum continues to gain momentum, some of its popularity is eating into the market share of the largest crypto, BTC. Based on data analytics, the current market cap of ETH has reached 41% that of BTC, which has doubled compared to the beginning of this year. In the 2017 bull market, it reached a maximum of 85% before dropping off. Will the end of this bull run also see ETH almost eclipsing BTC as the King of Cryptos? 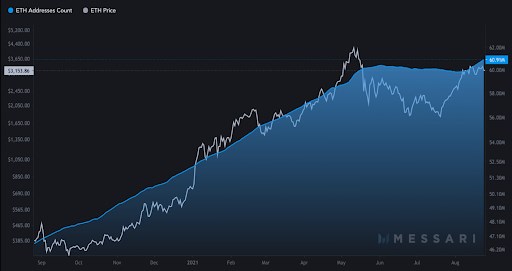 Another metric that suggests ETH could outperform BTC is their respective hash-rates. Post the great miner exodus, the hash-rate of ETH has fully recovered and even surpassed that in May to hit a new ATH. 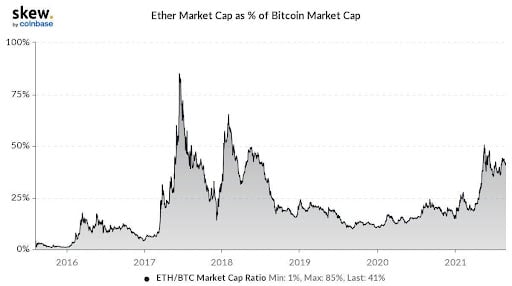 BTC hash-rate, on the other hand, even though it has also made a significant recovery, has only recovered 50% of its fall. Could this mean that the network of ETH could be healthier than BTC at the moment? As price movement often follows hash-rate, could this mean that we could see ETH break ATH before BTC does? Despite metrics of ETH looking better, BTC maximalists need not fret as BTC is also expected to move higher as its hash-rate continues to recover. It is a matter of time that the BTC hash-rate recovers and posts a new ATH again. 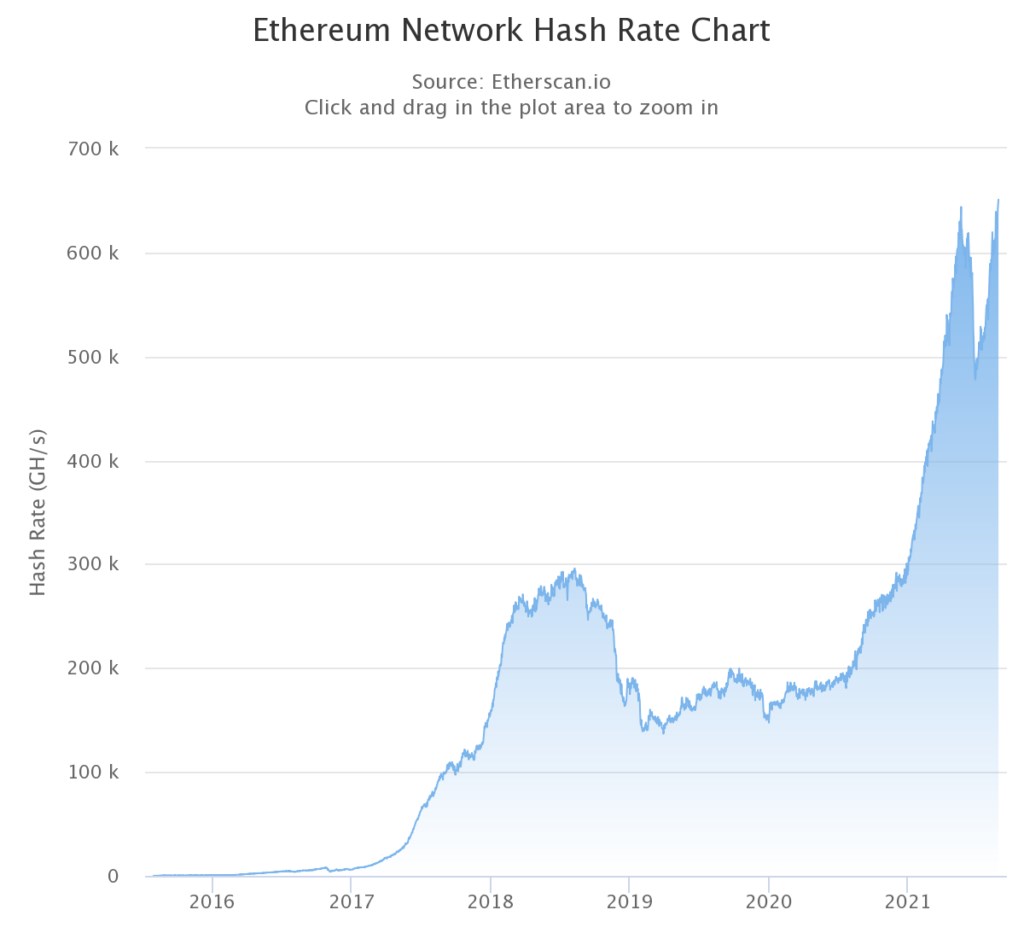 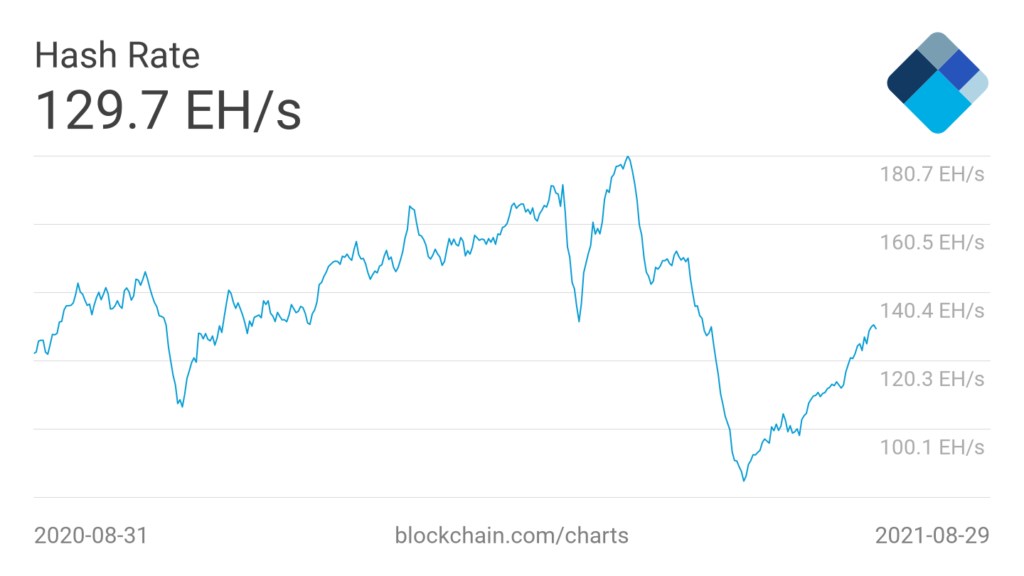 While the King of Cryptos managed to stage a late-week rebound, sellers continue to emerge whenever price crosses $49,000 to take it back lower, causing uncertainty in the market as a whole, with the price of most altcoins not being able to break out of consolidation. There were some exceptions though, as tokens popular with institutional investors like SOL and LUNA continue to inch higher. SOL is closing in on $100 as price moved up 25% in 2 days while tokens popular with retail investors remained lackluster.

Retail market players seem more interested in playing NFTs than trading tokens at the moment, with the sale of NFTs continuing to break new ground. The immense popularity of NFT games like Axie Infinity has propelled NFT platforms to become the highest gas guzzlers on the ETH network. 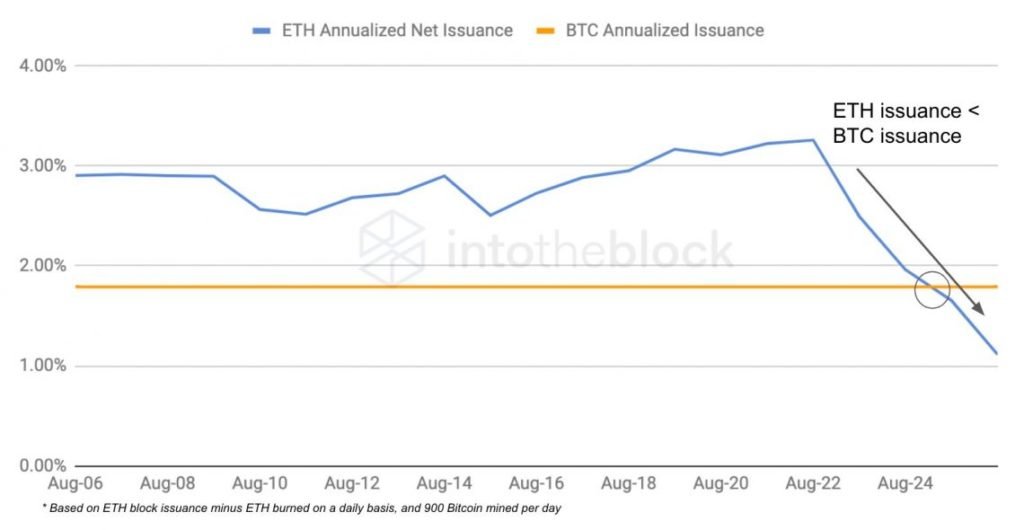 Even payment’s giant Visa jumped onto the NFT bandwagon and bought a CryptoPunk. It reportedly paid $150,000 for CryptoPunk 7610, one of 3,840 female punks. Within an hour of Visa’s purchase, around 90 more CryptoPunks sold for around $20 million, showing the extent of the craze on NFTs currently, with market watchers citing instead of DeFi Summer, we are having an NFT Summer this year. Until BTC breaks out of $50,000 convincingly, market attention could continue to be on NFTs instead of trading as trading volumes continue to fall. However, once BTC manages to come alive again, these fickle traders will likely come back en masse to set the altcoin markets on fire again.