XRP: Going back in bears’ claws?

Out of the entire list of Top 10 cryptocurrencies, Ripple has been the most disappointing one - it has provided a negative return on investment, based on the results of its performance in 2019. Despite having achieved good publicity regarding the sizable investments of $20 million in the cross-border payment gateway MoneyGram, XRP had nothing but botched attempts to replace Ethreum at the second spot in global rankings.

Over the past 365 days, Ripple had decreased in value by substantial 28.45%, leaving traders and enthusiasts wondering whether this coin is being deservedly placed in the cohort premium cryptographic assets.

The current situation around XRP

This 1-day chart that depicts XRP/USDT pair shows that the coin has been moving in the descending channel since the middle of last August. Right at that time, the price of XRP ran off the cliff after a fairly decent bull rally that ended at the peak of $0.48. The rally provided respectable gains for those who were foresighted enough to exit their long positions at around $0.4 - $0.43, which amounted to 75% to 78% gains. But those who were too reluctant had to witness how the price fell abruptly right into the current descending corridor. 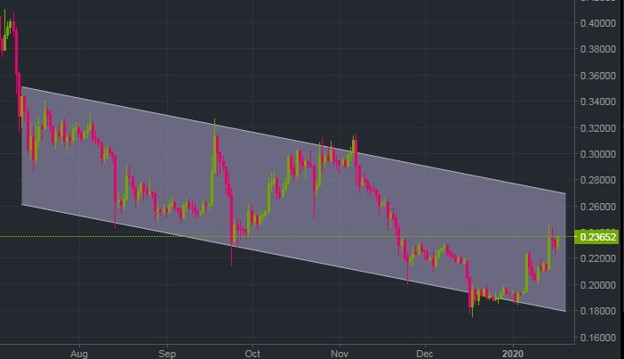 Over that period of time, XRP tested the channel line as many as six times, making lower lows on each occasion. The cryptocurrency has been doing so poorly that even the present bull rally didn’t have enough strength to perform a breakthrough in the given channel.

However, on the 6-hour chart, Ripple has engaged on the uphill run that crashed through 4 Fibo retracement levels, right to the heights of $0.22 then made a pullback to $0.2 only to have an incredibly strong upside impulse, which took the coin above $0.24 for another pullback. Right now, XPR is testing the same resistance at $0.24. 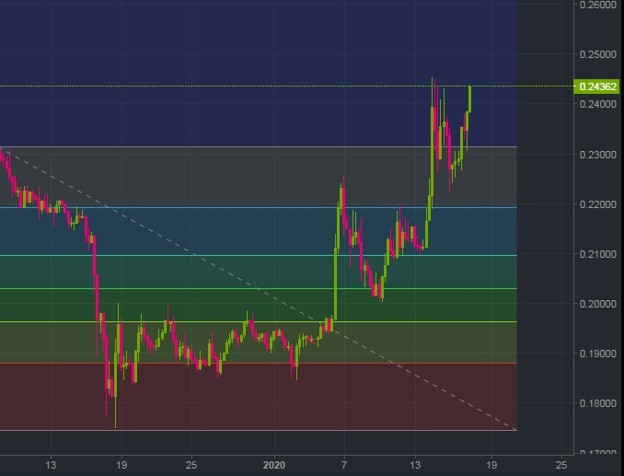 There is one peculiar thing about the XRP’s price action on the 6-hour time frame: on the chart below, you can see a double top formation - the first such top occurring on November 30 and the second one - on December 8. The double top is a classic bearish reversal pattern that had played out at first as it pulled the price of Ripple all the way below $0.18. 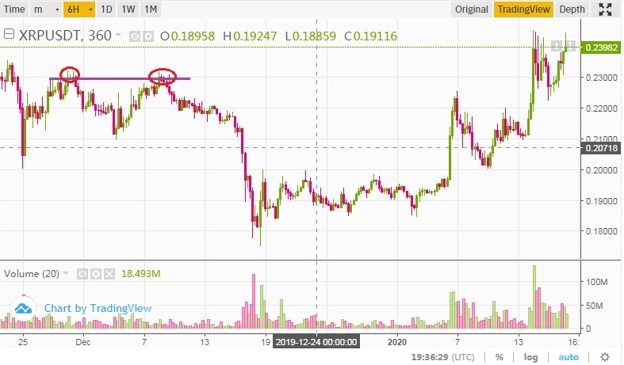 Logically, the price should have seen a consolidation phase - which it did - before making another dip deeper. But the bearish scenario was canceled by the bulls who have taken the entire cryptocurrency market on what looks like a stimulant-induced rally. If there hasn’t been such a strong pump throughout the market, would XRP have conquered a tough resistance at $0.23 -$0.24? The next few days will tell.

By the way, Ripple’s performance against Bitcoin has been rather bleak, except for January 6, when she created a massive green candle but got pushed back to 2560 Satoshis/coin. 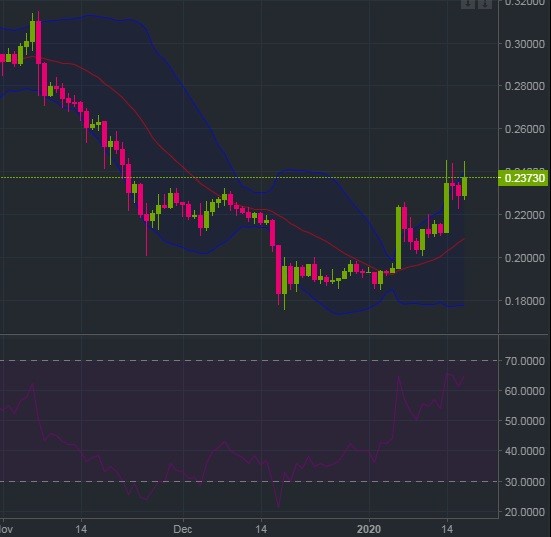 When it comes to technical indicators, XPR has broken out of the Bollinger Band squeeze to the upside, which signifies that the coin is now in the phase of intense volatility. Given that the 14-day RSI has nearly arrived in the oversold area, there is a high probability that the price will retrace back to the $0.18 - $0.2 area in the coming few days.