With the ravaging COVID-19 pandemic and the global economy that is crumbling before our eyes, both retail and institutional investors have been looking for ways to park their capital in assets that promise good returns in the middle and long-term future. A precious metal like gold is a fine option, though that particular market could be inaccessible to some due to the high entry barrier.

At the same time, more and more people come to realize that buying and holding (or trading) Bitcoin (BTC), even a fraction of it, is one of safest bets against the failing economy, despite the inherent volatility of the cryptocurrency. That’s why there are fewer of those who wonder if Bitcoin is a good investment, compared even to 2017.

The BTC price has lately become the hot-button topic since the forefather of all cryptocurrencies is making headway in revisiting the Bitcoin’s highest price level at $20,000, established on December 17, 2017. However, a wise investor should always think far ahead and ask himself or herself what  Bitcoin will be worth in 5 years. We would also like to offer our BTC price prediction for the next 5 and 10 years, taking into account the Bitcoin price history and its fundamental value.

A flash analysis of the immediate situation on the Bitcoin market

Needless to say that ever since PayPal announced that it’s stepping into the cryptocurrency space by offering its 360 million users an option to buy Bitcoin (BTC), Ethereum (ETH), Bitcoin Cash (BCH), and Litecoin (LTC) directly on its online payments platform, the price of Bitcoin has been pumping harder than Arnold at Muscle Beach Venice. The performance profile of the first cryptocurrency looks as follows:

This undoubtedly bullish performance has had a significant impact on the alignment of forces, so to speak, on the Bitcoin historical chart. 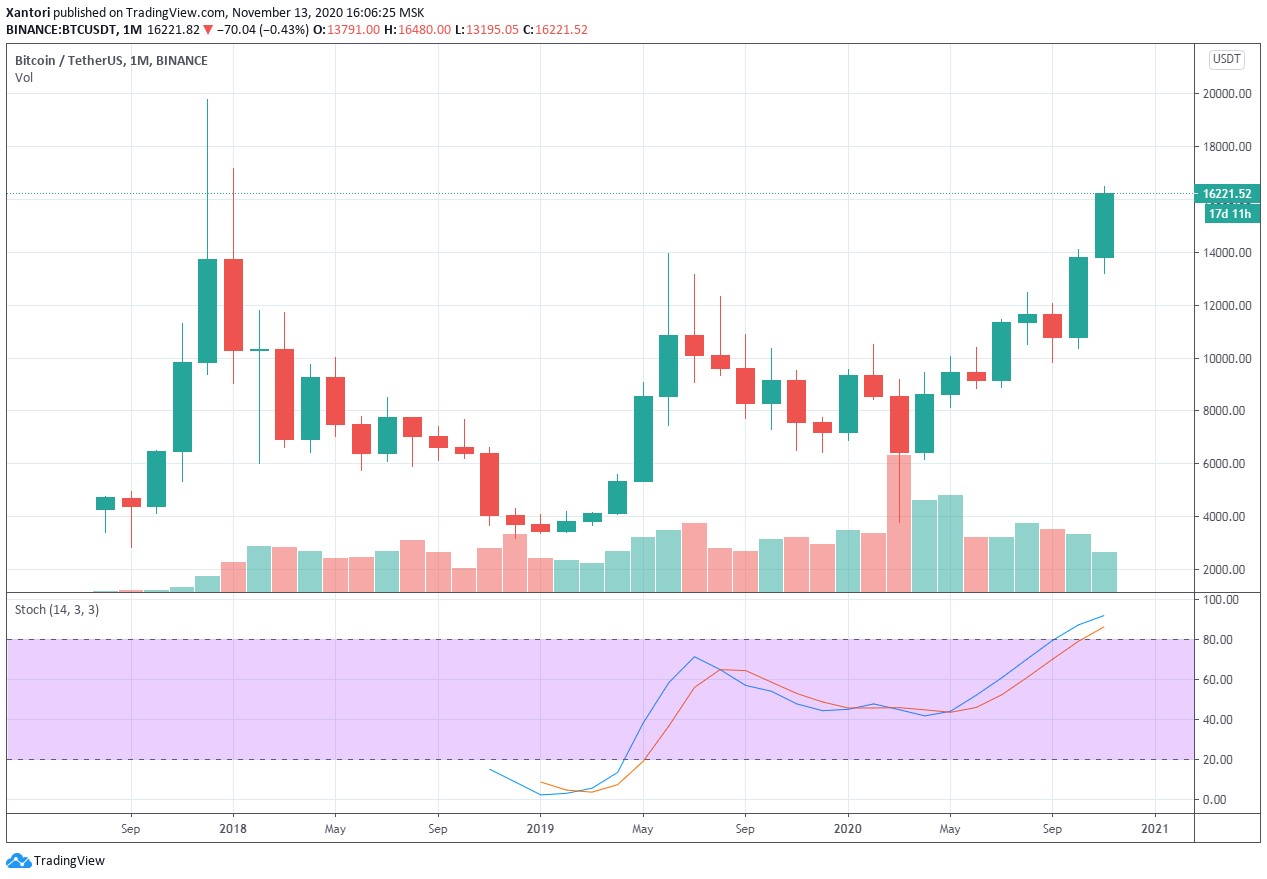 It doesn’t require an in-depth BTC technical analysis to see that the bulls are pushing the price to the all-time high in a more profound manner than they did in 2017 as the current monthly candle has opened above the close of the one that finalized the bull market three years ago, and whose upper wick had literally punctured the so-called crypto bubble and made it burst. But now, with the momentum on their side, as Stochastic shows, there is less and less doubt that we are entering the second bull market in the history of cryptocurrencies.

The current price of Bitcoin stands at $16,300 on the back of the 2.2% rise in the past 24 hours. The chart below clearly shows a steady bullish trend that has been gradually gaining strength over the past 30 days.

Our proprietary BTC price prediction algorithm, which takes into account the showings of the Crypto Volatility Index (CVIX), suggests that in the next 30 days, the Bitcoin price in USD will get another 36.3% boost to the upside.

The Bitcoin price chart for the year ahead confirms that the uptrend will persist throughout that period of time. Our BTC price prediction model suggests that in 6 months, BTC will be worth $28,330 (74.6% to the upside), whereas the 12-month projection puts BTC at $38,104, which marks a 135% price appreciation. This price expectation is supported by the fact that the FOMO around the cryptocurrency hasn’t even kicked in yet as the Google Search data still shows that the interest towards BTC remains quite low, especially when compared to that of 2017.

Besides, the majority of search inquiries about BTC price come from the developing countries, which is great for adoption purposes, but also signifies the fact that retail investors from the first-world economies haven’t jumped on the bandwagon yet. Once they do, the USD value of Bitcoin will rise exponentially, so there’s little to no doubt that the all-time high is going to be met and surpassed over the course of 2021.

Despite the fact that Bitcoin remains a risky asset that has the proclivity towards significant price fluctuations, like those we’ve witnessed during 2020, this cryptocurrency has one important trait, which is adding a zero to its price at least once every few years. The chart below provided by Bloomberg shows the path the BTC has made from 2011 until the present days, and how its value had ultimately increased ten-fold at the peak of every cycle. 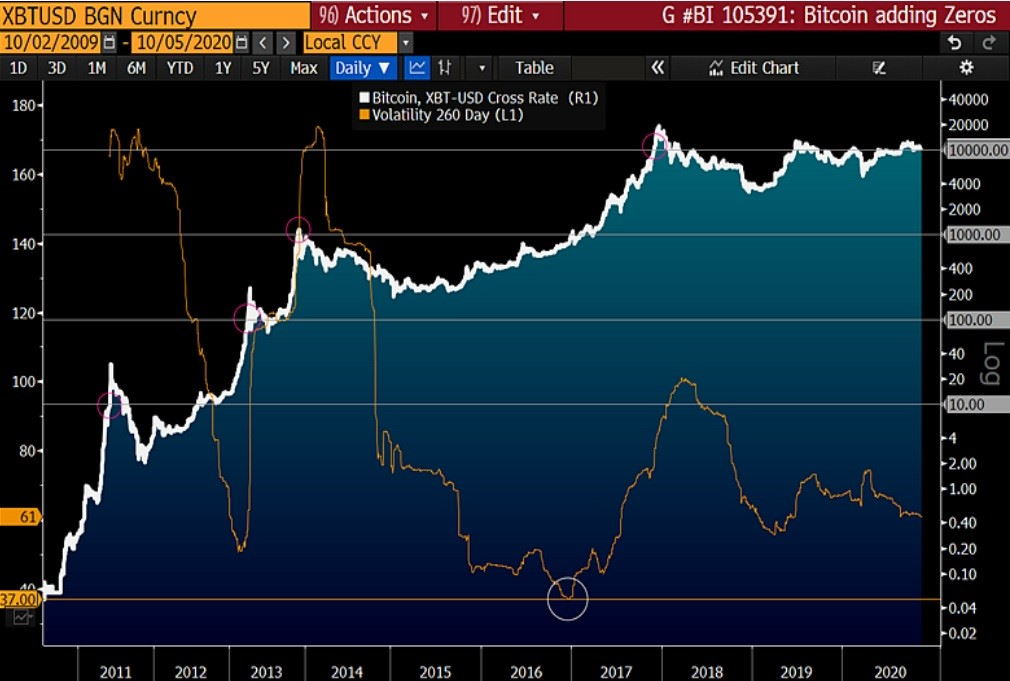 Right now, we might be looking at the nascent stage of the bull market that could last for 3 to 5 years since the cryptocurrency industry itself, and the market by association, have been getting more mature, which means more protracted, but also more sustainable, periods of market growth before it will naturally begin to degrade. The Bloomberg analysts claim that the maturation time during which BTC goes from one price height to another tends to double with every cycle, which puts Bitcoin price in USD at over $100,000 by the year 2025.

At the same time, our proprietary algorithm gives the dominant cryptocurrency a much wider berth for growth, suggesting that in 3 years, the price of Bitcoin will stand at $125,036 (670% to the upside).

To summarize, in 5 years, BTC will be worth anywhere from $100,000 to $488,000, which suggests that now might be the best time to buy Bitcoin since the bull market is at the nascent stage.

The Bitcoin price in the following 10 years will be determined not as much by its supply-to-demand ratio, as around 90% of the 21 million coins have already been mined, but rather by the rate of adoption of both blockchain and BTC. 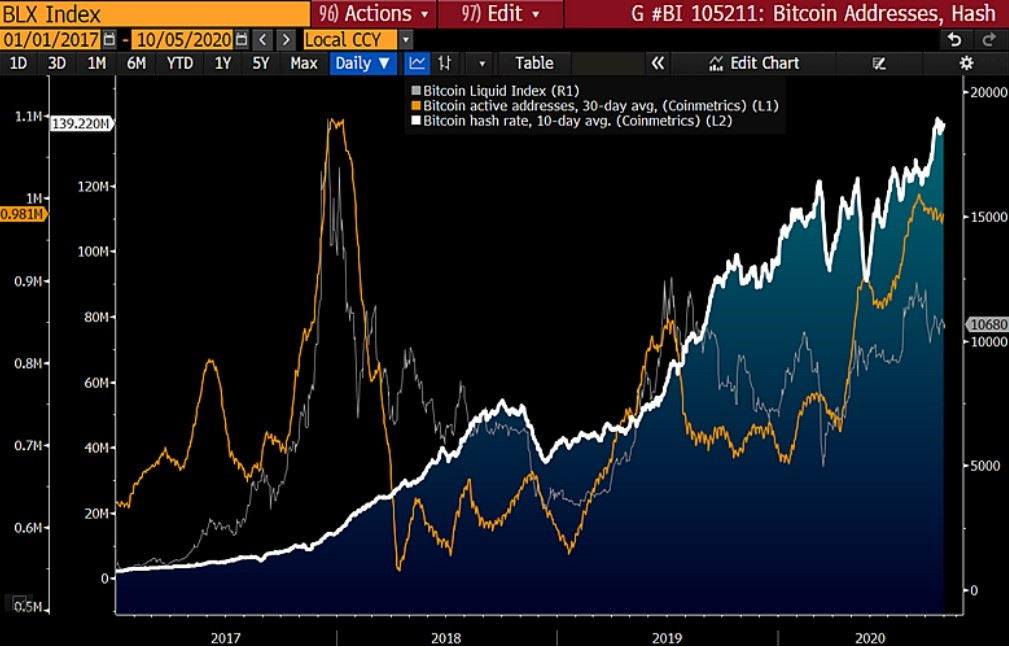 Let’s delve into the fundamental analysis of Bitcoin price for a bit. The chart above demonstrates that such important metrics as liquidity, hashrate, and the number of active addresses related to BTC have been continuously rising since the middle of 2018, and will persist doing so in the next 10 years as the adoption rate grows. Just like the Internet at its primary stages of development, BTC also offers only an early peek at the shift towards the global digital economy and the re-designed store of value.

Right now, all on-chain metrics are extremely positive for Bitcoin, which means that in 10 years’ time, we will see a true mass adoption of BTC and other strong cryptocurrencies that might well push the price of Bitcoin to $1,000,000 or higher. The popular BTC Stock-to-Flow model, depicted on the chart below, supports the notion of Bitcoin price arriving at a million mark by 2030.

The year 2030 could catch investors in the midst of the third bull market that is likely to begin taking shape in 2024, after the next Bitcoin halving event that will cut the block reward to 3,125 coins and ultimately shorten the supply and drop the inflation rate. Plus, let’s not forget that Bitcoin represents arguably the most lucrative market for millennials and the people of Generation X who are likely to choose a digital asset over something like commodities and property, thus bringing Bitcoin’s market capitalization, and its price, to a whole new level.

Is now the right time to buy Bitcoin?

Right now, the time is ripe to invest in Bitcoin because it’s approaching the ATH while the real FOMO hasn’t even started yet.

What are the fundamental advantages of Bitcoin?

Bitcoin represents both the payment system and the store of value that can be transferred instantaneously, thus making BTC more efficient an asset than gold or anything else. Besides, Bitcoin is at the nascent stage of adoption, while it’s destined to become the pillar of the future financial system.

What is the Bitcoin price prediction for 2021?

What will Bitcoin be worth in 5 years?

What will be the price of BTC in 10 years’ time?