What is the future for Bitcoin and altcoins?

A friend of mine, let call him John, once decided to make money on bitcoin. He started buying Bitcoin back in 2013. Then one BTC cost no more than 100 US dollars. During several years my friend managed to buy four BTC. It was just a hobby for him at that time.

When bitcoin rose to the level of 4000 dollars, John bought a few more BTC. He managed to earn on this, because bitcoin continued to grow! On such success, John could no longer restrain himself. He became simply obsessed with buying the first cryptocurrency. My friend decided to sell his apartment in order to buy even more bitcoins and definitely become a dollar millionaire. John sold the apartment, and he began to rent housing.

And here came 2018 and a sharp drop in the BTC rate began. John had to sell coins at a loss in order to repay the accumulated debts. Now he still has some bitcoins, but they certainly will not cover the losses associated with the sold apartment.

Unfortunately, there were a lot of such stories as John’s at that time. It is important for us to remember it, so that this does not happen in the future.

What issues will be reviewed in the article?

In this article, we will briefly touch on the history of bitcoin. We'll remember how the first cryptocurrency began to grow sharply in the second half of 2017, how it fell during the whole 2018 and began to rise again in 2019, and how it lingers now around the 10 thousand dollars mark. We’ll overview the current situation and the problems of miners. We’ll try to analyze why Bitcoin grew in 2019 and whether there will be a new take-off. We’ll look at how bitcoin returns to its former power. Finally, we’ll try to decide what is the reason for the current BTC price behavior, is it growth disease or speculation of large market participants.

A few words about the cryptocurrencies’ past

As a result of the fall in 2018, according to some estimates, almost 95% of investors in digital currencies remained in the red. Most likely, only hedge funds that used to play the longest and most desperate holders who began to buy BTC at the dawn of the cryptocurrency boom saved the funds. 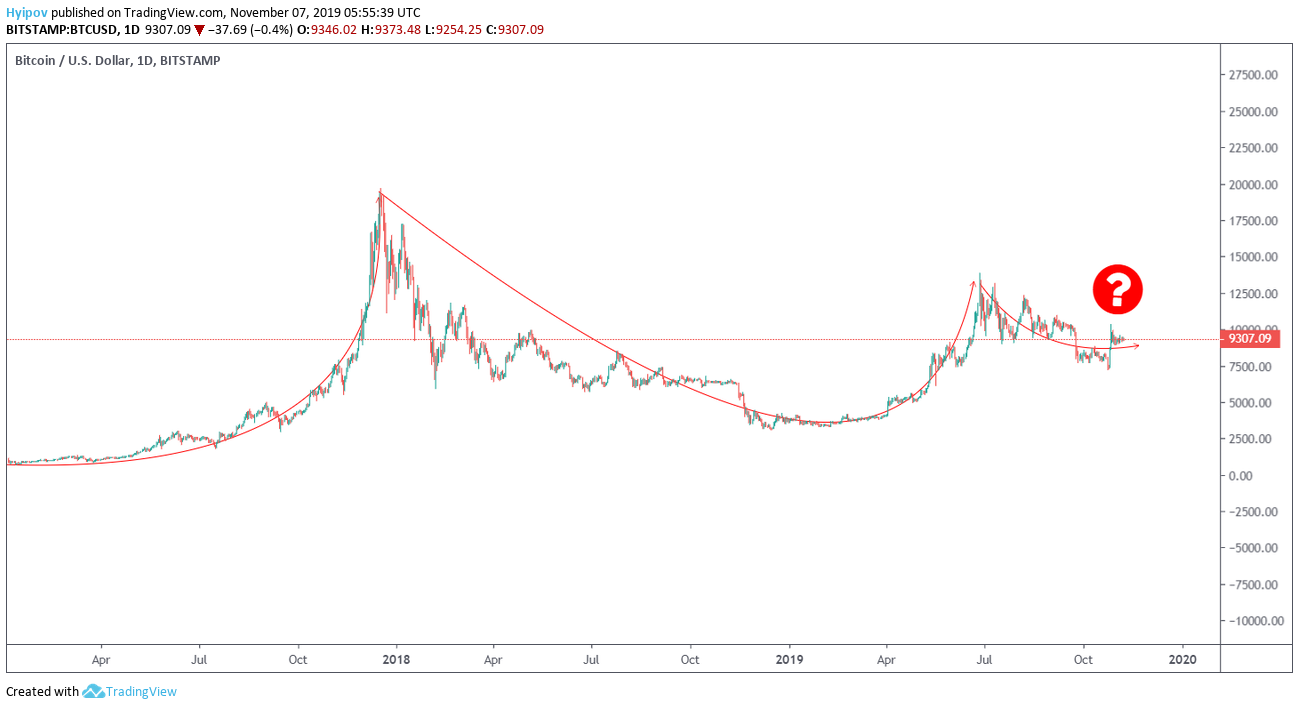 However, the situation has changed from the second quarter of 2019, the demand for mining devices, ASIC, has gone uphill again and there has even been a shortage of cryptocurrency mining devices. In just three months, starting from June 2019, 600000 new miners have connected to the network.

Many crypto enthusiasts believed in the best again, good news appeared, the BTC price was growing. The news background has changed a lot, and people began to discuss such large-scale projects as launching the cryptocurrency futures on the Bakkt platform, creating Facebook’s Libra and Telegram’s Gram, and launching the Chinese “digital yuan”. However, everything was not as simple as desired.

Trade war as a driver of bitcoin growth

The reason for the current rise in bitcoin prices is associated with China and the United States. If the trade war continues, the price of bitcoin will rise. Clem Chambers, analyst and director of the private investor site ADVFN, is sure of this.

The US-China trade war undermines investor confidence in traditional financial instruments. Stocks, dollars, euros, yuan - all this looks somehow unreliable against the backdrop of US sanctions against China and the complicated relationships between the US and Europe.

Of course, digital currencies are seen in a new light against this background. They can even be called a "safe haven" for capital. Of course, Bitcoin is still a highly risky asset. But where is calm now? 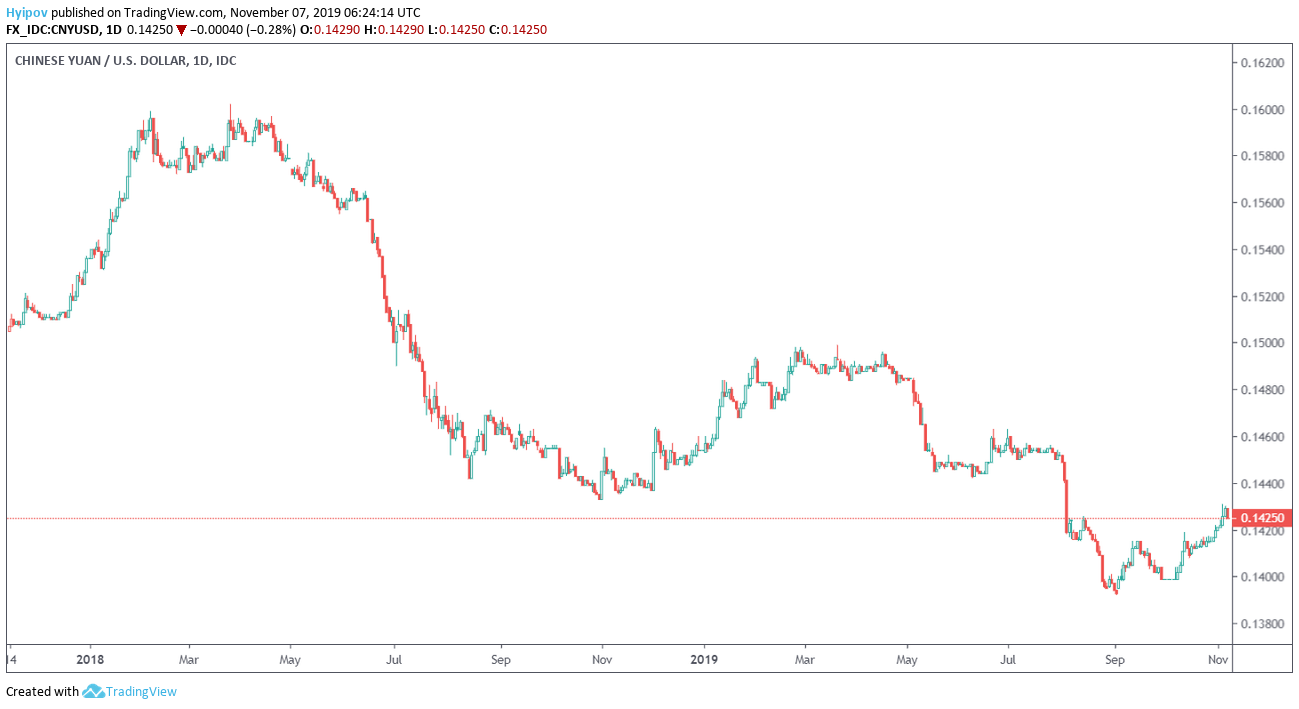 Chinese Yuan to US Dollar

The chart above shows that, starting in 2018, the yuan drawdown in relation to the dollar amounted to about 14%! Therefore, for the Chinese, Bitcoin has become a real protective asset against the backdrop of such a price decrease.

The Americans were able to go into the shares of their companies, the dollar and other proven assets. So, it is not for nothing that China is called the engine of cryptocurrency progress.

Clem Chambers, cryptocurrency market analyst and CEO of ADVFN, agrees with this opinion. He mentioned a similar position in the forecast on Bitcoin made in Forbes. He confirmed that his target for Bitcoin is in the region of 50000 USD.

What awaits cryptocurrencies in the nearest future?

Experts predict both the bitcoin’s fall and its growth.

For example, Trofim Eremenko, managing partner of VINT Consult, a member of the Board of the Association for Support and Development of Cryptocurrency and Blockchain Technologies, believes that by the end of the year bitcoin along with altcoins will show positive dynamics. Perhaps it will grow up to 15 thousand dollars.

In turn, CoinDesk Markets analyst Omkar Godbowl believes that there are signs of a bearish reversal on the market now. So, for the first time since February 2019, the MACD indicator fixed on the weekly chart is below zero. This, according to the expert, means that bitcoin may fall below the psychological mark of 9 thousand dollars.

It is worth noting that in early November 2019, China lifted the ban on mining as a business. It will also have a beneficial effect on the cryptocurrency sphere. The National Planning and Reform Commission (NDRC), an economic planning agency under the State Council of China, presented the final version of the catalog of “Guidelines for Industrial Restructuring.” According to the document, which entered into force on January 1, 2020, the PRC refuses to prosecute miners and combat crypto mining.

In developed countries digital currencies generally become part of everyday life. Many people in the US and the EU are already quietly paying with bitcoins in cafes, museums and hotels. Ordinary Americans get wallets to pay bills. Rednecks buy Ethereum and Bitcoins to their grandchildren for birthdays. Even older people begin to invest their savings in the cryptocurrency industry.

People just got used to the new digital reality. For their part, states are trying to take cryptocurrencies under control. No need to ban, just create a clear legal framework and articulate clear rules for the game in the industry, and it will begin to benefit. Most states will follow this path. Experts are sure of this.

In general, from outsiders of economic development, digital currencies are becoming an important phenomenon. True, it is still not clear what the potential of digital currencies is. Obviously, the situation with Libra, Gram and the "digital yuan" have become precedents. And how the story with each of these projects resolves will show us the immediate prospects.

Is it worth it to dive headlong into cryptocurrencies?

Now many crypto enthusiasts are trying to understand whether Bitcoin has really become a promising asset? Or should we expect another fall, similar to what happened in 2018?

Fundstrat analyst Tom Lee previously predicted BTC price growth in 2020 to $91 thousand. He conducted voluminous analytical work and focused on the cryptocurrency chart over the past nine years. He recently announced the emergence of "positive signals":

“In the last few days, many positive signals appeared: China's friendly policy regarding the blockchain; the S&P 500 index new maximum; the bitcoin misery index is restoring; the time of risk-off assets, gold, USA treasury bonds, has passed, and the bulln market resumed.”

John McAfee is confident that by the end of 2020, the bitcoin price of will rise to $1 million. He urged not to pay attention to weekly fluctuations in the rate of the first cryptocurrency.

Cryptocurrency expert and trader Roger Quantrillo believes that by the end of this year, bitcoin will cost more than 17 thousand dollars.

To buy cryptocurrency or not to buy? The final decision is up to you. You can focus on the opinions of experts, traders and analysts, but if something goes wrong, all the risks will be on your side, and the John’s sad story is a good example.

Of course, blockchain is a very promising technology that will become an important part of society. With the popularization and development of the blockchain, almost everyone on the planet will have an idea about the cryptocurrency market. All experts unanimously agree on this opinion.

In general, John McCarthy, Roger Quantrillo, Tom Lee, Clem Chambers and many other experts are sure that Bitcoin will grow next year. This is indirectly confirmed by the processes of regulating the cryptocurrency market around the world and the keen interest of large corporations in this technology, not to mention projects such as Libra and Gram.

Everything new causes rejection and resistance. This is a normal reaction of society, which is inherent in us by nature itself. Blockchain and cryptocurrency technologies are completely new phenomena, the mass distribution and adoption of which has yet to be.

Do not forget about risks and treat cryptocurrency as a long-term investment. Any expert will confirm these words to you.

Cryptocurrencies to be tested this holiday season

A lively backdrop to trade Crypto

What are the next levels to watch for crypto

Bitcoin has likely become too "noisy"