The US is going to track crypto transactions

The last bitcoin growth impulse confirmed the break of the downtrend: the chart confidently rebounded from the former upper limit of the downtrend trading range. However, as before in March, a consolidation above the previous highs in the area of $45K is required to confirm a break in the trend. As Ethereum dropped to a 10-day low, traders started buying put options in anticipation of the second cryptocurrency falling to $2,200.

On March 14, the European Parliament will approve the final version of the bill on the regulation of cryptocurrencies without wording that could be interpreted as a potential ban on bitcoin mining. US President Biden will also sign an executive order to regulate cryptocurrencies this week.

The focus may be on tracking transactions and preventing circumvention of US sanctions. The cost of bitcoin in rubles has updated its historical highs, exceeding 5 million rubles. Bitcoin was not so expensive even in April and November 2021, when its price in dollars exceeded $60,000. 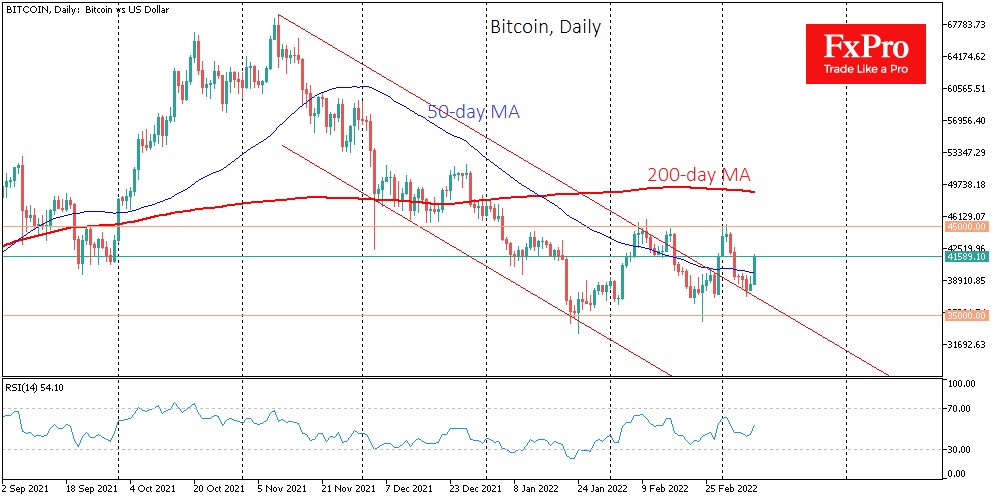 In general, the benchmark cryptocurrency has jumped by 8.7% over the past day, to 41,450. Ethereum has added 7.9% over the same time, while other leading altcoins from the top ten show growth from 3.3% (XRP) to 21% (Terra). According to CoinMarketCap, the total capitalization of the crypto market grew by 6.9% over the day, to $1.83 trillion. The dominance index jumped to 43%.

The Cryptocurrency Fear and Greed Index rose 1 point to 22, remaining in "extreme fear" territory.Bitcoin was bought on the decline to $38K, and the move to $40K on Wednesday morning caused a surge in buying, probably associated with the closing of part of the short positions, quickly bringing the rate to current values.