The price of bitcoin slid last week after a wider stock sell-off in the U.S. sent the cryptocurrency market into a frenzy, prompting the digital asset to plummet towards $36,000 by late Friday trading. Bitcoin continued to wane over the weekend. The virtual asset traded around lows of $33,983 on Sunday evening, marking a 5.8% decline from its corresponding Friday price. The decline follows a distressing day on Wall Street, in which the Dow Jones Industrial Average fell over 1,000 points on Thursday.

Meanwhile, the tech-heavy Nasdaq tumbled 5%. Both indices’ losses marked the worse points decline in a single day of trading since 2020. The Dow and Nasdaq continued their decline on Friday.

Bitcoin dwindled even further on Monday. The digital asset sank to its lowest point since January on Monday. An injured stock market continued to weigh down on bitcoin, which currently appears to be highly correlated with other risk assets like tech stocks. Early Monday trading saw bitcoin hit $33,266, testing its January low of $32,951. A fall below that level would be its lowest since July of last year. The world’s largest cryptocurrency is now down more than 50% from its all-time high of $68,990 in November 2021.

Since the beginning of the pandemic, analysts have pointed out bitcoin’s increased correlation to the equity markets. More specifically, the price movements of large tech stocks. This is now true more than ever. Data from Bloomberg shows that the 40-day correlation between the two asset classes stood at 0.70 on Friday- a record high level. 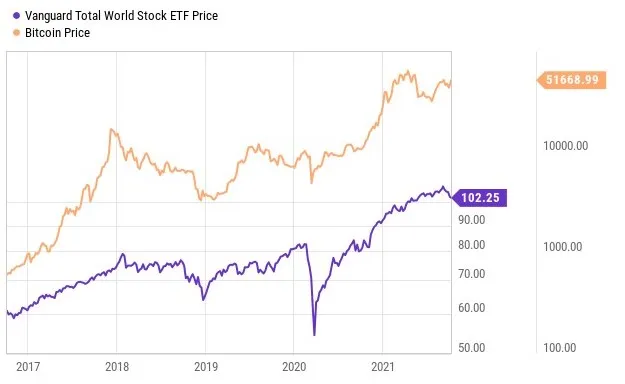 Bitcoin’s 40-day correlation with the S&P 500 stock benchmark is at another record high of 0.82. A correlation of 1 implies the two assets are moving in perfect positive correlation, Meanwhile, a reading of -1 suggests perfect negative correlation between the two. A reading of 0 implies no correlation. Whilst many have propelled bitcoin to be a strong portfolio diversifier and safe store of value, the asset’s rising correlation with risky tech further corrodes this argument.

“I think everything within crypto is still classed as a risk asset, and similar to what we’ve seen with the Nasdaq, most crypto currencies are getting pummelled,” remarked Matt Dibb, COO of the Singapore-based crypto platform, Stack Funds.

The tech heavy Nasdaq fell 1.5% last week, and has lost 22% year to date. The index has been weighed down by persisting inflation, forcing the Federal Reserve to hike rates despite slowing growth. Dibb mentioned other factors that assisted bitcoin’s fall over the weekend, including the market’s notoriously low liquidity over the weekends. Investors also weathered some short-lived fears that the stable coin Terra could lose its peg to the dollar.

What’s Next for the World’s Largest Cryptocurrency?

Taking the macro environment into account, markets remain under pressure from inflationary and recession fears. According to Vijay Ayyar, Vice President at the Luno crypto exchange, bitcoin lost key support after falling through the $37,500 level. That could indicate a drop even lower than $30,000.

If that happens, the world’s largest cryptocurrency could descend as low as $25,000 before any “significant” moves back up takes place, Ayyar remarked. The high correlation between bitcoin and tech stocks is not one that’s expected to persist, according to the consensus.

“That correlation will over time break down… [if] the Nasdaq falls 3% crypto doesn’t fall 9% like it would have last year,” Michael Novogratz, CEO of Galaxy Digital remarked.

More pain can be expected for the cryptocurrency markets. The unnerving fact amongst analysts is this. Different to the 2008 crisis or the Coronavirus recession, there’s no incoming injection of liquidity to create a V-shaped recovery, as seen previously. Still, with market uncertainty aside, interest from institutions and long-term holders in crypto remains strong. This isn’t expected to weaken any time soon.