Bitcoin slowed late Tuesday afternoon, retreating from local highs near $32.3K to $31.5K. Ethereum has lost 2.5% in the past 24 hours to $1930. Other altcoins in the top 10 are losing between 0.3% (BNB) and a 6.5% increase (Cardano) over the day. Total cryptocurrency market capitalisation, according to CoinMarketCap, declined by 1.3% overnight to $1.30 trillion. Bitcoin’s dominance index rose another 0.3% to 46.3%. The cryptocurrency fear and greed index were up 1 point to 17 by Wednesday but still in “extreme fear”.

Bitcoin updated three-week highs above $32,300 on Tuesday, continuing the previous day’s rising momentum. According to CoinShares, institutional investors invested $87 million in crypto funds last week, reaching $0.52 billion since the start of the year. Glassnode notes that most HODLers continue to build up their positions in bitcoin.

A possible signal of the end of the bear market could be the capitulation of long-term investors, who sold BTC last week at an average loss of 27% compared to the quotes at the time of purchase. The crypto market is still full of optimists, while a real bull market is more likely to sprout from despair or oblivion. 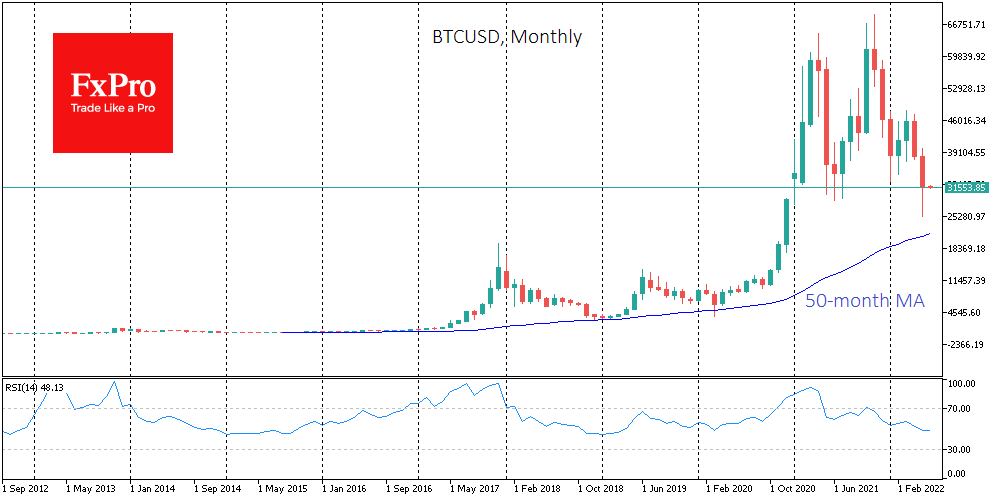 We saw despair in March 2020 and an example of oblivion - more than a year of decline since the December 2017 peaks. It has now been half as long, so we should be prepared to see a rally in a falling market in the coming months, but not a repeat of the October 2020 to April 2021 rise. Bitcoin ended May down 17.1%, failing to live up to historical trends indicating a relatively successful month. The crypto market was adversely affected by the collapse of the Terra ecosystem. According to Glassnode, Luna Foundation Guard sold 80,081 BTC in May to support the UST stablecoin. In terms of seasonality, June is considered a relative success for BTC.