Launch of the Telegram Open Network

The Launch of the Telegram Open Network Mainnet Expected in March, Investor Reveals

The much-anticipated launch of the Telegram Open Network (TON) might take place at the end of March, according to one of the investors who chose to remain anonymous.

He revealed an extract from the investor newsletter confirming that the overall progress towards the TON operational version has reached the 90% completion phase. The Durov brothers and their team claim that since September 2018, they have made the 20% progress in the network development.

Initially, the release of the TON mainnet was scheduled to occur this January, but it was postponed because, as the very same newsletter indicates, the team didn’t manage to complete the development of all necessary algorithms in due time. 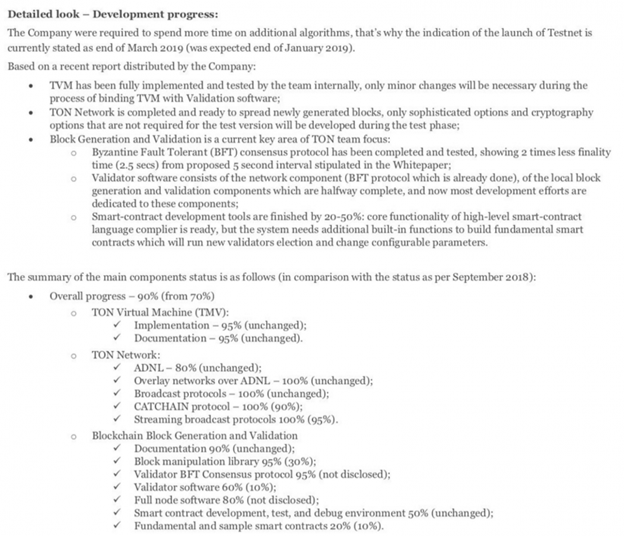 According to the Bell, a reputable Russian blockchain outlet, Pavel Durov scheduled a meeting with TON investors at the end of February where he will showcase a fully-functional test version of the network. At the same time, Ton will initiate stealth testing to detect and eliminate potential issues with the code and various functional aspects.

Unconfirmed sources claim that the TON testnet has already been operational for an unspecified period of time, available only to a closed circle of users.

As for other essential updates featured in the newsletter, the developers had already completed their work on the CATCHAIN protocol, an integral part of the TON network used to implement general consensus among the validators in attempt to achieve the Byzantine Fault Tolerance (BFT). The streaming broadcast protocols are also said to have been fully developed.

The most significant progress has been displayed in work on the validator software, utilized for the verification of validators and the formation of blocks. As of now, the software is at the 60% completion stage while in September this figure was only at 10%.

Why TON causes such a massive stir in the blockchain community

The official launch of TON is expected to be arguably the hottest event of this year. The blockchain-based project initiated by two brothers, Nikolai and Pavel, who were the masterminds behind the creation of two ultra-popular social networks (Telegram and VKontakte), had passed the pre-ICO rounds in flying colors, selling 44% of 5 billion GRAM tokes and raising $1.7 billion.

Only a limited number of investors were admitted to the GRAM token sale, among which were such highly reputable venture capital firms as Sequoia Capital, Kleiner Perkins, and Benchmark. These names alone should instill confidence in the future of TON. Such a keen interest from the whales of the financial world can be partly explained by the fact that the Telegram Open Network already has an enormous pool of potential users which is expected to migrate from the vastly popular instant messaging service of the same name.

Given that the number of Telegram’s active users have been growing exponentially over the last five years (the platform currently has more than 200 million monthly active members), the implementation of the blockchain technology could instigate an even larger influx of users. Such a substantial market capitalization and user base offer GRAM a chance to instantly occupy a spot among the top 10 cryptocurrencies upon its official listing on major exchanges.

The crypto market has taken a hiatus from the sell-off

ETH After the Merge: Fall Instead of Growth

Cryptocurrencies: Main Week of the Calendar

Is Bitcoin heading to $15K? Why are the markets suddenly pulling back?

Ethereum Merge to swamp other coins with miners

All Hope for Ethereum