Instagram will implement NFT in a couple of months, Meta founder Mark Zuckerberg said. Despite the loud statement, it should be noted that all of Zuckerberg's projects related to digital assets previously failed and did not find wide support from the digital community. The head of Meta has a good sense of trends of social networks, augmented reality or metaverses, and in the latter two, there are more and more fast-growing projects.

The total capitalization of the crypto market, according to CoinMarketCap, grew by 4% over the day, to $1.82 trillion. The Bitcoin Dominance Index rose 0.2 points to 42.8%. 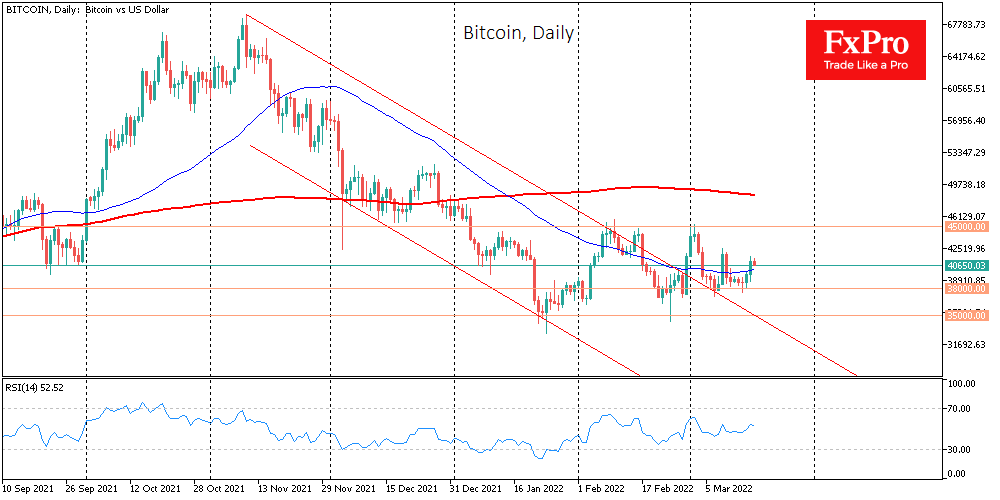 The crypto-currency index of fear and greed added 3 more points in a day, to 27, moving from extreme anxiety to just fear.

The FxPro Analyst Team mentioned that demand for bitcoin was supported by it rising for the second day in a row. It was helped by the strengthening of stock indices and the weakening of the dollar. On Wednesday, the US Federal Reserve raised rates by 0.25%, but the comments made by market participants seemed softer than expected, which caused the dollar to fall.

According to Glassnode, $1.2 billion worth of bitcoin was withdrawn from the Coinbase crypto exchange in just a week. This is the largest net outflow since July 2017, which signals the mood of investors for long-term storage of the asset.

Despite the positive dynamics in recent days, Bitcoin has been trading in a sideways range between $37K and $42K for almost the entire month of March, unable to choose a further direction. Since the last days of February, there has been a solid support line on the declines under $38K. And this is bullish strength, reflecting that long-term buyer interest has migrated from $30K to $38K due to inflation and geopolitical tensions. Such a migration of the level of interest to long-term buyers fully reflects the price jump, which is the actual depreciation of the value of fiat currencies.

Has Bitcoin reached the bottom?

Bitcoin stabilised but has trouble to reverse strongly

Bitcoin will fall until the bulls capitulate

The culmination of the battle for the trend in Bitcoin

Bitcoin undecided on a scenario for May

Bitcoin: How the $1 million rally begins