The question of what we have seen the last three weeks, just a correction to a downtrend or the beginning of a new rise, remains open. Cryptocurrency quotes are going up along with the S&P500 and Dow Jones stock indices, and even slightly ahead of them. Something similar could be observed a few months ago. But then, digital currencies outperformed stocks by almost two months with the transition from growth to collapse. The BTC/USD pair reached a high on November 10, 2021, after which it turned south. As for the S&P500, its high was on January 04, 2022. And this is logical: despite the correlation, the stock market is still much more stable than the cryptocurrency market. But both of them are very dependent on the monetary policy of the US Federal Reserve (and, in part, on the actions of other Central banks). 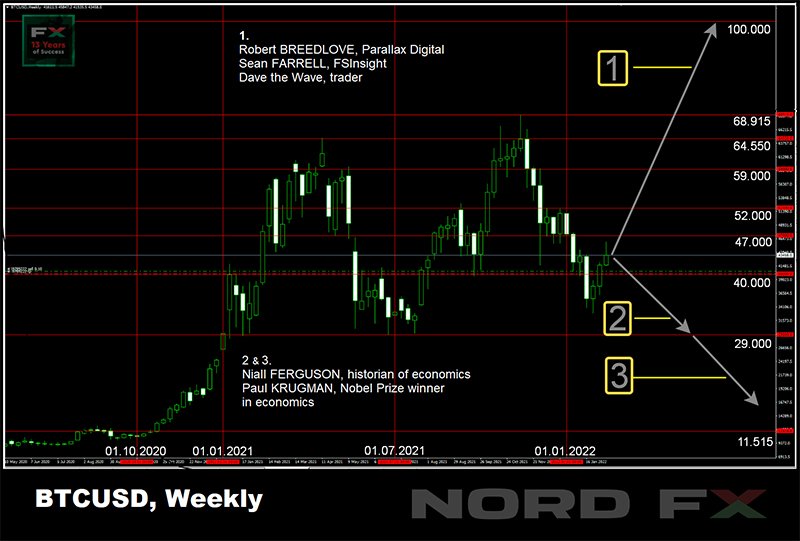 The stimulus program that kicked off the printing press flooded the US economy with cheap dollars and boosted risky assets. The Fed is currently tightening its policy. Based on this logic, we can predict a further decline in investors' interest primarily in cryptocurrencies. We have already said that the movement of crypto quotes will depend in the near future (and already depends) on the mood of just a few governments and Central banks. But the expert community has not yet come to a consensus as to what their attitude will be.

For example, Johnny Liu, CEO of the KuCoin crypto exchange, has taken the “bright side”, believing that the authorities will gradually understand the advantages of cryptocurrencies. According to him, there is a trend in the mass adoption of cryptocurrencies at the state level, governments are exchanging experience in their legalization, so any restrictions are only a temporary measure.

The opposite view was expressed by the billionaire founder of Bridgewater Associates, Ray Dalio, who believes that this asset class is likely to be banned by the governments of a number of countries. Ricardo Salinas Pliego, one of the richest people in Mexico and founder of the Grupo Salinas group of companies, also believes that governments are not interested in facilitating the use of bitcoin, since the decentralized nature of the first cryptocurrency makes it much more difficult to control its turnover.

The same opinion is shared by Parallax Digital CEO Robert Breedlove, who said that the authorities will try to make life as difficult as possible for cryptocurrencies, as a class that poses a threat to their financial systems. To do this, they will use all their tools, aiming to regulate digital assets as much as possible. This is what we have seen lately in countries such as China or Russia.

Some optimism is caused by the fact that quite a lot of representatives of large businesses already side with digital assets, recognizing the merits of cryptocurrencies to one degree or another. Of course, not all of them are ready to invest serious capital in this market right now. The aforementioned billionaire Ray Dalio, while stating that “cash is trash,” admitted that digital assets make up a “tiny percentage” of his personal investment portfolio. And that in general, given the small size of the cryptocurrency market, it "is given too much attention."

In terms of market size, Robert Breedlove believes that the market capitalization of bitcoin will increase dramatically over the next few years and exceed $5.0 trillion. Inflation in the US is at a 40-year high at the moment. And according to the head of Parallax Digital, the same thing can happen with the dollar as with the currency of Venezuela. The US currency will hyperinflate by 2035, at which point the price of BTC in dollar terms will become astronomical: 1, 5, or 10 million USD per coin. That is, the Fed's printing press can provide tremendous support to bitcoin. But the biggest threat to it, according to Robert Breedlove, comes from the same regulator.

All indicators of the crypto market look much more modest at the time of writing the review on the evening of Friday, February 04.  The total market capitalization is still slightly closer to $2.0 trillion and is at the level of $1.90 trillion ($1.85 trillion a week ago), the Bitcoin Dominance Index is 42.46%. The BTC/USD pair is trading in the $42,500 zone, and the Crypto Fear & Greed Index has left the Extreme Fear zone and, having gone up sharply, reached 50 points, which corresponds to the neutral state of the market.

A number of experts monitoring the dynamics of supply and demand for bitcoin are alarmed by the weak base for the current growth of the coin. As a result, in their opinion, the BTC/USD pair may return to the $40,000 zone within a month, and then fall even lower, to $29,000, in the medium term.

An even more pessimistic forecast was given by the author of the book "The Ascent of Money", historian of economics Niall Ferguson. He believes that if the historical dynamics of BTC fluctuations is repeated, the price of the first cryptocurrency will fall to a low of $11,515 by November 2022. This is 83% below the historic peak in bitcoin value reached in November 2021.

At the same time, Ferguson disagrees categorically with the opinion of the Nobel Prize winner in economics Paul Krugman, who draws a parallel between the volatility of the cryptocurrency market and the collapse of the US real estate market in 2007-2008. Which, as you know, was followed by the global economic crisis. Niall Ferguson believes that “it is not worth waiting for a polar vortex or a giant ice cyclone. And a drop in the value of bitcoin to the lows of the 2010s is unlikely. However, this does not mean that crypto winter will bring less cold.”

Of course, there are much more optimistic forecasts. According to Sean Farrell, an analyst at financial research firm FSInsight, bitcoin’s dominance over altcoins will remain unshakable and its price, despite a “shaky start” in January, could reach $200,000 in the second half of 2022.

The FSInsight report also states that the ethereum platform is undervalued and the second largest cryptocurrency by capitalization may reach $12,000 this year. Sean Farrell is optimistic about the transition of ethereum to the Proof-of-Stake algorithm. And if the process goes smoothly, capital inflows into the ecosystem will increase, “regardless of bitcoin’s performance.” And the CEO of the KuCoin crypto exchange, Johnny Liu, believes that since most innovative projects are launched on the ethereum, it will break ahead of BTC in the long run.

The fact that the BTC/USD pair could overcome the $100,000 mark at the end of this year or at the beginning of 2023 is also indicated by the forecast of a crypto trader nicknamed Dave the Wave. However, this scenario also implies a “decent correction”. The trader notes that the $100,000 cyclical curve should be interpreted not as a support level, but as an average price trajectory that bitcoin can roughly follow. In regard to the near future, Dave the Wave noted that while bitcoin's monthly chart may still look bearish, certain bullish signals are emerging on the weekly chart. In addition, bitcoin managed to break out of the narrow downward channel, which also indicates an upcoming increase.

And at the end of the review, our traditional heading of crypto life hacks. This time we will mention a trader nicknamed macromule who shared a very interesting trading algorithm. According to this trader, the signal to open a position is the tweets of the bitcoin skeptic and gold supporter Peter Schiff about the first cryptocurrency. The user recommended buying BTC every time after the next such tweet and closing the position after 72 hours. According to macromule, this strategy could have made 203 trades since last May, of which 65% 65% would have been in positive territory and brought about 1,000% per annum income. Of course, we cannot recommend using this "strategy". But if someone still wants to test it, they can do it on a demo account without risking real money.