Bitcoin rose 3.1% over the past week, finishing near $30,000. Ethereum added 0.9%, while other leading altcoins in the top 10 showed mixed dynamics, ranging from a 10.7% decline (Solana) to a 23.2% rise (Cardano). The new week is off to a promising start. BTCUSD has added 4.6% in the last 24 hours, more than 4% since the start of the day and is again testing the $31.0K mark. Cryptocurrency investors were not spooked by Friday's market decline, as key stock indices were above the recent local lows and had been adding in recent hours.

The total capitalisation of the crypto market, according to CoinMarketCap, rose 3.8% in 24 hours to $1.28 trillion, with the Bitcoin Dominance Index adding 0.2% over the same period to Friday's 46.5%. By Monday, the cryptocurrency fear and greed index rose from 10 to 13 points. For about a month now, this indicator has been steadily below 20 - in a state of extreme fear.

While at current levels, BTCUSD remains below the consolidation area at the lows of the middle of last year. It is worth paying attention to the change in the trend seen in the weekly candlesticks. Last week's lows and highs were higher than the week before. The intraday charts show that the price is being pushed up in the absence of investors in the USA. 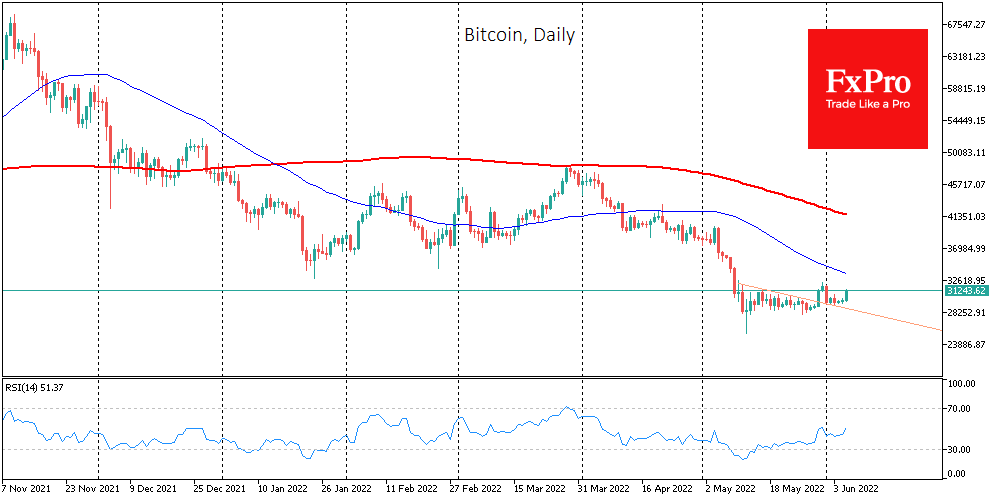 However, one must make sure that this demand is global. Retail investors may try to promote the start of the rise by feeding them an abundant supply. BTC was climbing to three-week highs but lost almost all its gains by the end of the week. The first cryptocurrency has been trading in a sideways range around the $30,000 level for more than three weeks. The bearish trend in the market has caused long-term investors to capitulate. This factor signals that the price has reached a multi-year bottom, according to CryptoQuant. Reserve Bank of India Deputy Governor T. Rabi Sankar believes central banks' digital currencies could completely displace private virtual currencies, including bitcoin.

May proved to be a bad month for BTC and ETH miners. Bitcoin miners' earnings fell 21.9% for the month, while miners of the second cryptocurrency fell 24.1%. The market will draw its attention to The annual Consensus 2022 this week. This year's Crypto Industry Excellence Expo will be hosted in Austin, Texas, in June 9-12.