Bitcoin has been down 1.2% over the past seven days, trading at $23,600. These are tiny moves by crypto market standards. Indeed, the first cryptocurrency has been dealing with little amplitude over the past week. Ethereum has added the same amount of 2.6% to $1720 in the last 24 hours and seven days. The top altcoins' 7-days performance ranges from -0.11% (Solana) to +19% (Avalanche).

The total capitalisation of the crypto market, according to CoinMarketCap, rose 2.5% for the week to $1.1 trillion. The Bitcoin Dominance Index slipped 0.6 percentage points to 40.4% over the same period. The Cryptocurrency Fear and Greed Index fell 3 points for the week to 30 and remains in a state of "fear".

Last week Bitcoin made its fourth reversal from decline to rise within a moderately rising range. Investors were probably inspired by the positive dynamics of the stock markets amid recovering risk demand there. Buying forces reversed the trend even before the price reached the lower boundary of the corridor and the 50-day average. 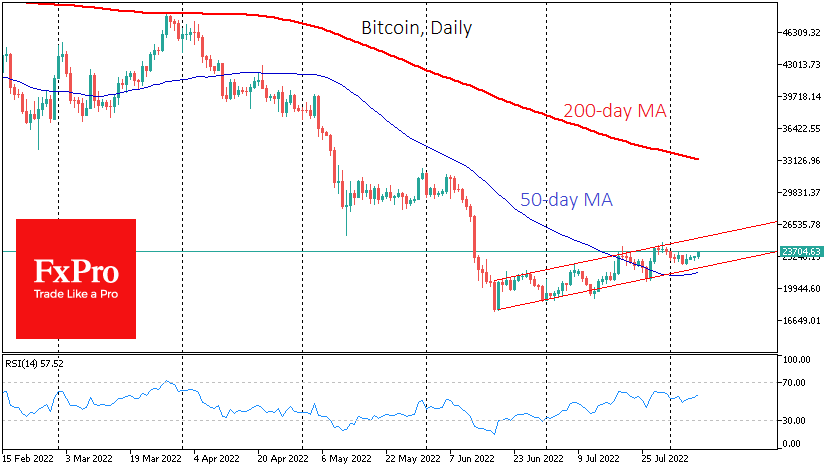 The 200-week moving average, in this case, acted as a support line, which we see as a confirmation that the downtrend in cryptocurrencies is over. However, it is worth remembering that a rally rarely follows this. Typically, the market goes through a long period of uncertain and vulnerable growth. Only global events like halving or extreme liquidity injections from central banks or governments into the financial system can kick-start a rally. 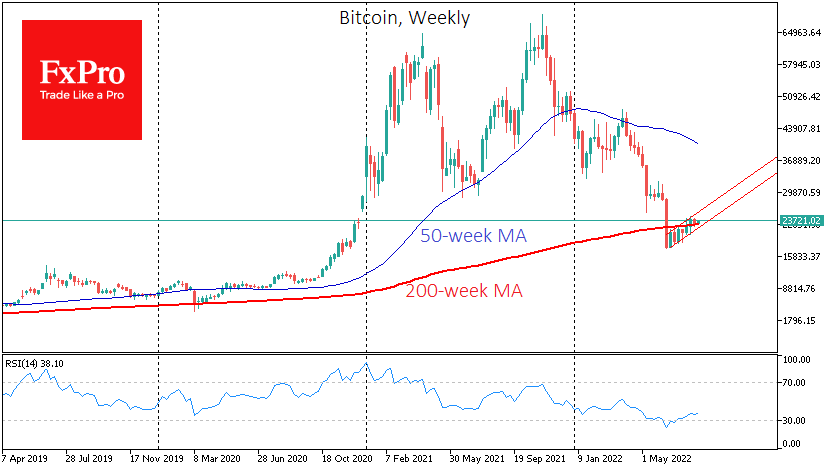 According to a Cumberland survey of institutional investors, most respondents expect bitcoin to rise to $32K as soon as this year. Before that, however, BTC could fall to $16K.

Tesla CEO Elon Musk again spoke out in support of Dogecoin. According to him, the "dogecoin" cryptocurrency network can handle significantly more transactions than the bitcoin network. CME Group, one of the world's leading derivatives players, will launch BTC and ETH futures in euros.