BTC changed a little on Monday, ending the day around $41.3K. However, in early trading on Tuesday, we saw a jump of more than 5% to $43.3K; then the first cryptocurrency sunk to $42K. Over the past 24 hours, Ethereum has gained 4%, and other leading altcoins from the top ten are not far behind: Solana and Avalanche are up 2%, Cardano is up 6%. Terra is out of the general outline, decreasing by 0.5%.

According to CoinMarketCap, the total capitalization of the crypto market increased by 3% over the day, to $1.92 trillion. The Bitcoin Dominance Index added 0.1 percentage points to 42% due to the BTC surge.

Cryptocurrency fear and greed index fell by 4 points in a day, to 26, as its estimates do not include the latest bitcoin spurt. This is not the first such jump in BTC since the beginning of March, in contrast to the neutral or even negative sentiment in the stock markets. All this indicates the readiness of the bulls for decisive action. However, until now, such impulses cannot be on a solid basis, because the fundamental demand for risks is under obvious pressure. 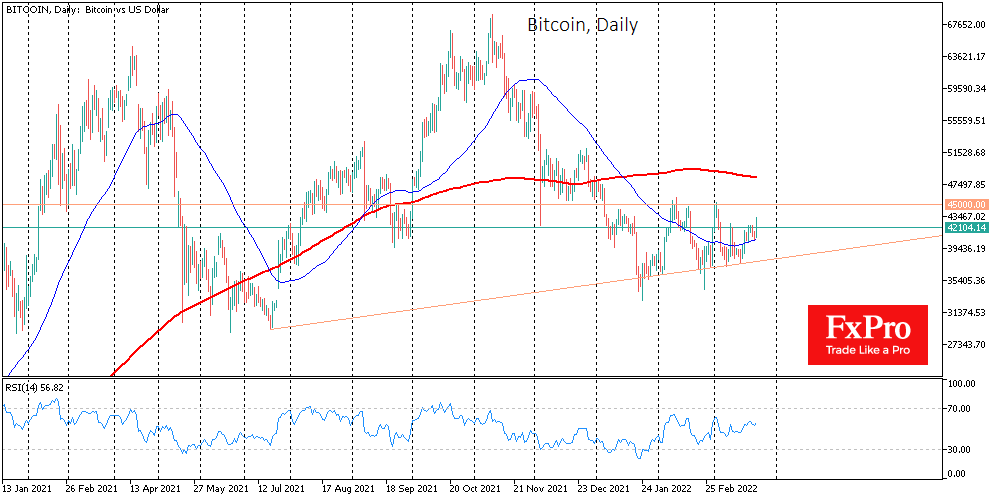 The most that the bulls were capable of in this case was the formation of support at the lows of July last year (ie below $30K). In January, the level moved to $35K and further to $37K at the end of February.

According to the FxPro analysts, institutional investors withdrew about $47 million from crypto funds over the past week. The outflow of funds has been observed for the second week in a row. Meanwhile, the largest Australian financial conglomerate Commonwealth Bank of Australia stated a sharp increase in interest in crypto assets among clients. The bank intends to double the department responsible for the crypto industry.

Among the big news, it is worth noting the number of burned ETH tokens in the Ethereum network, which exceeded 2 million. The process of burning altcoins began on August 5 after the release of the London update, which changed the mechanism for calculating commissions for transactions.