Bitcoin to new all time highs?

Bitcoin has attracted a fair bit of attention in the last few days, hitting $62,857 and just shy of a new all-time high. Sentiment remains buoyant as we head past weekend trade and into the new week and the potential for the SEC to give their blessing on the ProShares Bitcoin Strategy ETFs that tracks the Bitcoin futures markets. A buy the rumour, sell the fact scenario may eventuate and is a risk and our trader flow is certainly far more nuanced than usual after the recent bull run, with 55% longs/45% shorts on Bitcoin CFD’s. 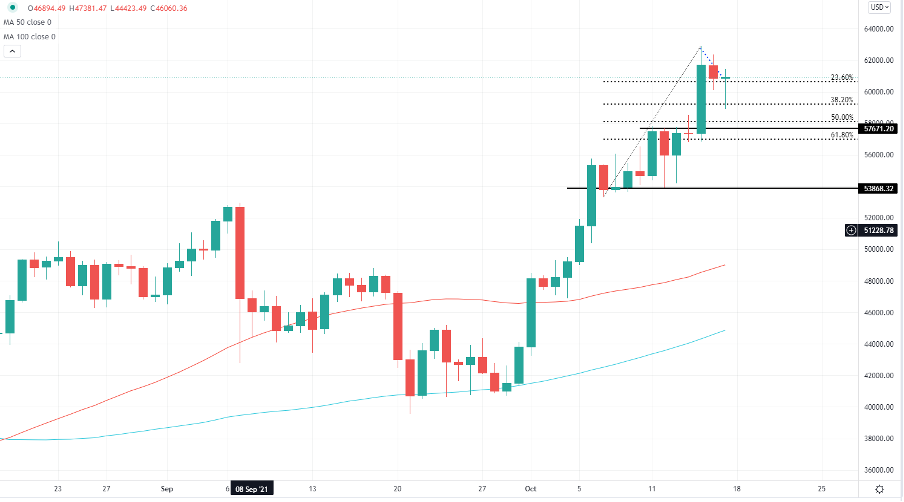 We’ve tested the 38.2% fibo of the recent run-up from $53,000 and the price seems to have found a steady platform to build and make a new assault higher – a break of Friday's high and the all-time high will come into play. The news of a suite of futures-tracking ETFs is not new to those following the space closely and to many this is a step forward but not the game-changer that some are sensing. That may come in the form of the Grayscale Bitcoin spot ETF, which has been put into motion, but we’ve been excited by a spot ETF before, and this may need more work on the regulation front.

The ProShares ETF will attract trader capital and some will venture into this as a long-term play, but most know that tracking the futures price comes with costs especially in a bullish market – in fact, due to the roll charge we’ve seen from the contango in the futures curve, we’d have likely seen as futures ETF underperform spot Bitcoin by around 40ppt over the past 12 months.

Performance of the ETF

This will be dictated by the differential between the front-month futures contract and second-month contract. In a bullish world you’ll typically see the further-dated futures contract trade at a premium – a factor known as contango – it’s here where the costs blow out, as the position is rolled into a higher-priced contract on the expiry date. The arb traders are already quite involved in the crypto space, looking to take short positions in the futures, and picking up the positive carry – obviously, as with any long and short (or ‘pairs’) strategy the key here is sizing the trade correctly on both legs. Being able to short the ProShares ETF as a CFD, assuming the ETF gets SEC final sign off, would offer a clean shorting vehicle to express the pairs trade – and you tend to receive swaps on short positions too.

We still need to consider the factors driving the primary trend in Bitcoin – the anticipation of the futures ETF is one part in the evolution of the project, but clearly not the only factor driving a 50% rally since late September. While some will disagree, we’ve seen signs of traders rolling out of a variety of altcoins into Bitcoin and what is perhaps the more defensive coin.

We can look at headlines around Brazil moving towards the path of El Salvadore and offering Bitcoin as a legal currency. Twitter is allowing users to tip others in Bitcoin and there's been some adjustments that have increased the speed of transactions. Aside from that we can look at the traditional flow metrics and see open interest in the futures market picking up, reports of solid buying from ‘whales’ have certainly been talked up and momentum traders in the mix as price printed higher highs and lows.

The explosion in Defi continues too with $200b now in total locked value and that is only going one way, as is the flow into NFTs. So, this is a space to watch and on a number of statistical models Bitcoin is neither over-owned nor over loved.