Bitcoin continues its wild swings between $29-31.5K. By the end of the day on Tuesday, it had moved sharply back to the upper end of the range, but Wednesday began with a new dip, temporarily falling below 30K. Overall, bitcoin adds 2.7% over the day and has lost 4% in seven days, all well below the intraday fluctuation amplitude.

Ethereum has added 2.2% in the last 24 hours, while other leading altcoins have shown mostly positive dynamics, where a 9.8% spike in Cardano contrasts with a 0.3% decline in Solana’s price.

Total crypto market capitalisation, according to CoinMarketCap, strengthened by 2.2% overnight to $1.24 trillion, with the Bitcoin Dominance Index down 0.2 points to 46.6%. The Cryptocurrency Fear and Greed Index was up 2 points to 17 by Wednesday and remains in “extreme fear”. 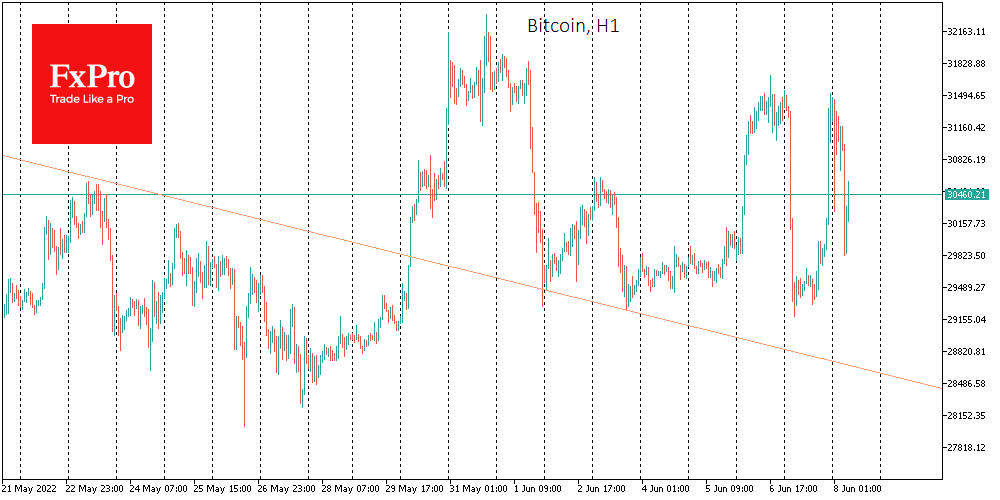 According to Glassnode, investors continue to buy the dip in bitcoin. The number of addresses with a balance of at least 0.01 BTC reached 10.088 million earlier this week, setting a new record. The market dynamics of the last few days indicate that the whales are making some big transfers of bitcoin from one pocket to another. Either this is an attitude of speculation in the range or whipping up froth to attract capital from retail investors who may feel that the low point has been passed.

The US Securities and Exchange Commission (SEC) launched an investigation into the sale of BNB tokens by cryptocurrency exchange Binance in 2017. The regulator will assess whether it was an unregistered offering of securities.

American economist and Nobel Prize winner Paul Krugman called cryptocurrencies a fraud, comparing them to the mortgage crisis in 2008.