Bitcoin slips to the lows of the year

Total crypto market capitalisation, according to CoinMarketCap, changed little over the week, remaining at 1.8 trillion, as a wave of buying in the first half of the week turned into a strong sell-off in the second. The bitcoin dominance index rose 0.2% to 41.2% over the same period.

Crypto Fear and Greed Index rose from 24 to 27 and returned to its starting point during the week. By Monday, the index had lost another point to 23, remaining in the extreme fear territory. Bitcoin has declined for the third consecutive week, along with stock indices.

Thursday and Friday saw a sharp pullback along with the stock market, and bitcoin fell below the circular $40,000 level. Changpeng Zhao, the Binance's chief executive, said the adoption of cryptocurrencies would rise as geopolitical tensions escalate and the use of the dollar as a sanctions tool grows. He believes the US will lose out to the rest of the world if it continues to suppress bitcoin. 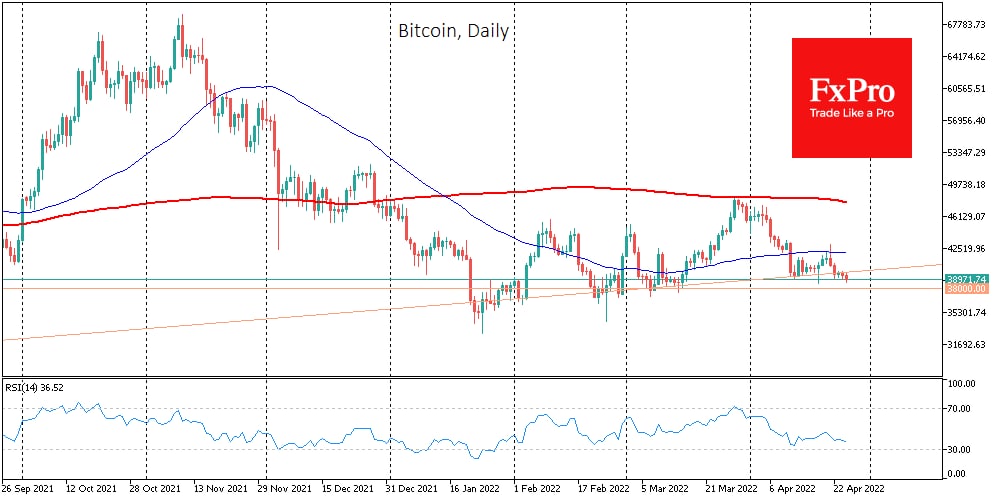 A group of US congressmen have spoken out against mining cryptocurrencies using the environmentally damaging Proof-of-Work (PoW) consensus algorithm. They said that cryptocurrencies of particular concern are BTC, ETH, XMR and ZEC. The EU has discussed banning BTC trading because of its energy and environmental impact. Bitcoin's energy consumption continues to increase and is attracting the attention of environmental organisations and regulators.