Bitcoin is up 7.7% over the past week, trading at $22.7K on Monday morning. Ethereum added less - only 4.1% to $1640. Other leading altcoins in the top 10 have gained between 0.4% (BNB) and 12.7% (Shiba Inu). The exception was Polygon (-1.8%). The total capitalisation of the crypto market, according to CoinMarketCap, rose 5.1% to $1.045 trillion during the week. The bitcoin rally pulled up the entire crypto market. And buying in BTC, in turn, intensified after US stock indices reversed to higher late Friday afternoon.

Like in the good old days, the crypto market is feeding off the rise in stock indices but growing ahead of the curve. Moreover, at the expense of reduced liquidity, the price surpassed $23K for the first time since August last year.

Bitcoin has started a new bull market and is headed for $24.8K, where the psychologically important 200-week moving average and the 161.8% Fibonacci level of the momentum from the December lows are concentrated. The 50-week MA is headed to the same area. The market may need a long recharge and consolidation before a new upside wave begins. 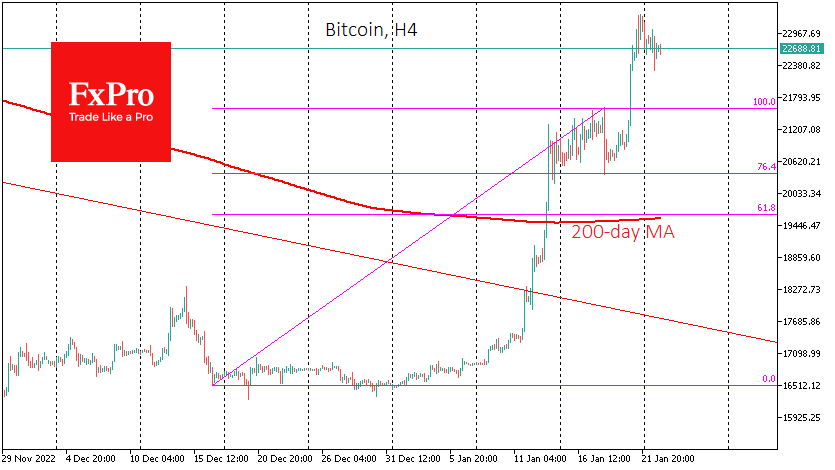 DCG holding company Genesis Global Capital has filed for bankruptcy, and its case could be heard as early as 23 January. According to Genesis, the company has defaulted more than $3.6bn to its 50 largest creditors. The company's total debt obligations could be as high as $11bn. The IMF has called for additional measures to regulate the crypto market to avoid the volatility of cryptocurrencies, which affects banks and financial institutions. The Fund calls for virtual assets to be distinct from traditional assets and to prevent the substitution of fiat currencies in the economy with crypto assets, primarily stablecoins. 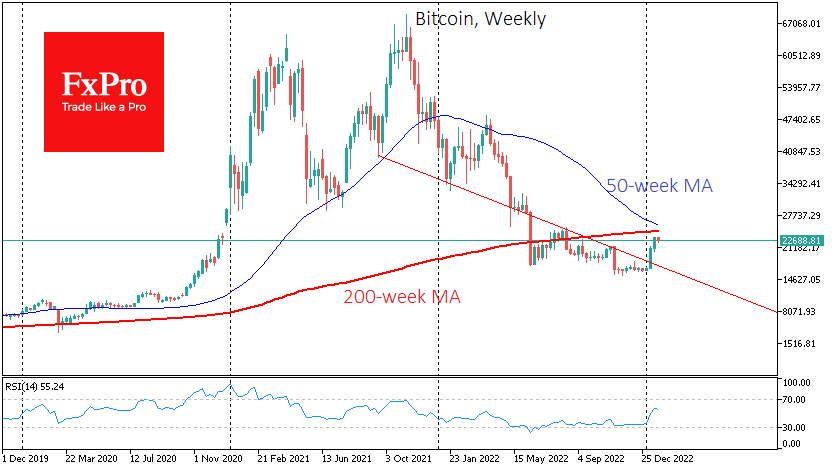 Moody's has once again downgraded the long-term credit rating of cryptocurrency exchange Coinbase and its unsecured bond rating. Moody's said that the downgrade to non-investment grade B2 reflects a significant weakening of Coinbase's earnings in 2022. The digital renminbi platform has been updated. A significant innovation was support for smart contracts, which give several new uses for China's state-owned cryptocurrency. On 16 January, the digital yuan was used for the first time to buy securities.