Bitcoin was down 5% on Tuesday, ending it at around $19,400 and remaining near that level by the start of European trading. Ethereum has lost 3.3% in the last 24 hours to $1055. Altcoins from the top 10 fell from 1% (BNB) to 4.2% (Cardano). Total cryptocurrency market capitalisation, according to CoinMarketCap, sank 2.1% to $870bn overnight. The Cryptocurrency Fear and Greed Index lost 1 point to 15. Bitcoin fell the most since Tuesday’s beginning of the month amid a stock indices decline.

BTC fell below $20,000 and tested eight-day lows below $19,300. On weekly timeframes, Bitcoin remains pinned to the oversold RSI area and under the 200-week moving average. While indicating that the market has gone too far and too fast during the recent sell-off, this disposition does not yet show signs of rebound.

The bear markets of bitcoin and other risky assets of the past teach us that a sell-off is usually followed by a prolonged sideways move but not a V-shaped rebound. Moreover, a final reversal is often preceded by a power failure - a capitulation that makes assets ridiculously cheap, which we have yet to see. According to CoinShares, institutional investors have shown little interest in crypto. Capital inflows into crypto funds last week amounted to $15 million, with about half of the funds coming into Ethereum products, with inflows into ETH rising for the third week. 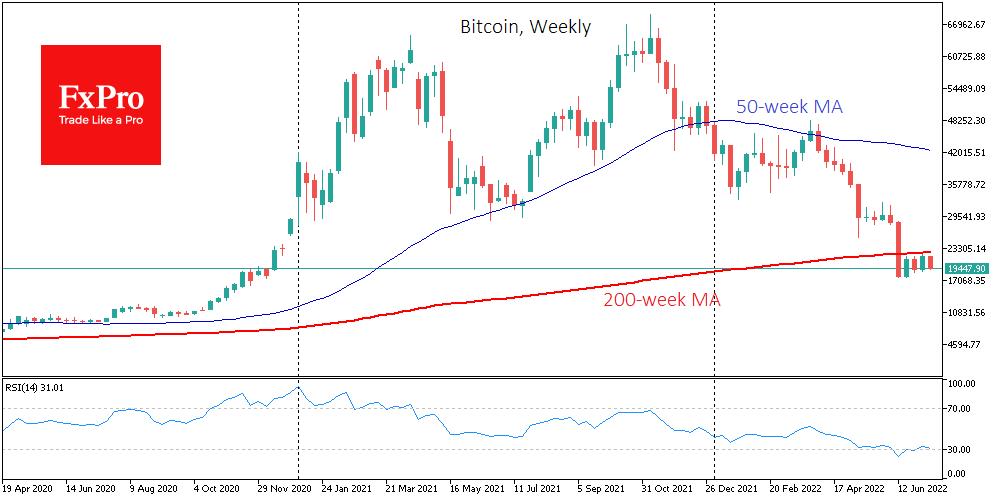 Inflows into funds that allow shorts on bitcoin fell to $6.3 million from $51 million a week earlier. The market has yet to form a bold ‘bottom’. Cryptocurrencies could soon face severe problems as they lack catalysts for growth in the face of widespread adversity, according to CoinShares.