The Cryptocurrency Fear and Greed Index was up 2 points to 20 by Friday and remains in “extreme fear” mode. As we can see, the first and second cryptocurrencies outperform the rest of the market, indicating a recovery in demand among professional investors following the strengthening of stock indices. Since the beginning of the month, BTCUSD has gained more than 17%, which looks like an impressive result but only at first glance. 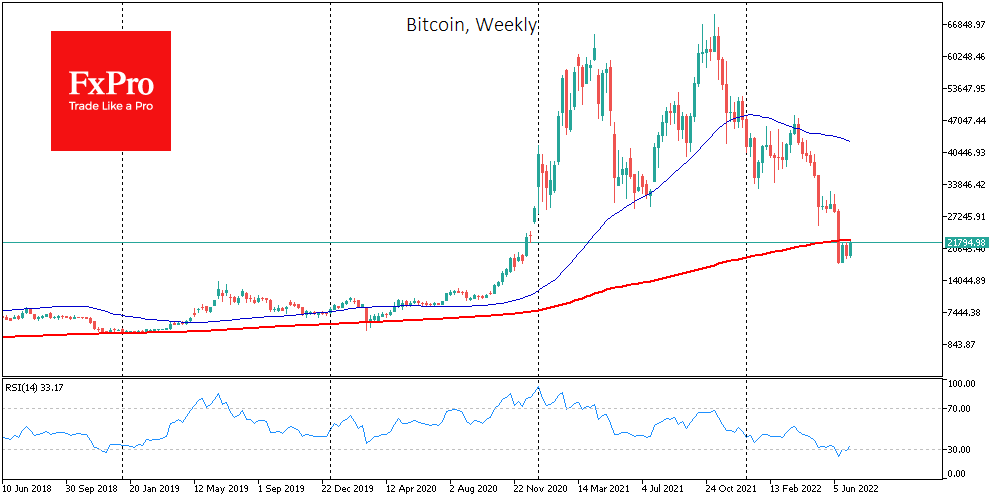 The thing is, bitcoin was driven as low as possible by the end of June, and the current remarkable rise is just a recovery to the levels of 3 weeks ago. BTCUSD is still below its 200-week average and sold off again today on its approaches, indicating a significant supply overhang from sellers. Bloomberg believes the crypto market has bottomed out, and BTC will resume its offensive in the next six months. According to Bank Of America, the number of active cryptocurrency users is down more than 50% from its peak in November last year.

At the same time, consumer interest in digital assets remains at a reasonably high level. A US investor has filed a class-action lawsuit in California court against Solana and its partners, accusing them of illegally profiting from selling SOL tokens as a security.

The developers of Ethereum continue to test the transition to the Proof-of-Stake consensus algorithm. They announced the successful migration of the Sepolia test network to PoS. The developers of Shiba Inu reported on the current state of development of new ecosystem components and announced the launch of its stablecoin.