Analysts say $46,500 is the key level for Bitcoin to flip to support

Bitcoin’s fundamentals remain strong but analysts pinpoint $46,500 as the key level to reclaim as support in order to preserve the current uptrend. The double-digit rallies seen from many altcoins shows traders are becoming increasingly bullish with the passing of each day, but maintaining this momentum will to some extent depend on Bitcoin's (BTC) short-term price action.

Data from Cointelegraph Markets Pro and TradingView shows that after touching the $48,000 price level during the early morning trading hours on Aug. 16 the price of BTC dipped below $45,800 as bulls scrambled to put a halt to the price slide. Here’s what analysts are saying could be the next steps for Bitcoin price.

Bitcoin needed to retest support after a 50% rally

Bitcoin’s surge from $29,500 on July 20 to $48,000 on Aug. 14 has resulted in the price settling in a trading range between $44,000 and $48,000, as shown in the following tweet from pseudonymous Twitter analyst Nunya Bizniz. The equilibrium point identified in the above tweet is found near $46,123 and the analyst could be hinting that after BTC tests the support, buy volumes could increase because short-term traders would view the current pullback as nothing more than a support/resistance retest.

On the other hand, pseudonymous trader, Gas Fring, suggested that a bounce could also happen at the bottom of a rising channel would provoke the same result but it's worth noting that both analysts are using 1-hour charts so these suggestions simply refer to the possible price action outcomes of today.

A recent report from Glassnode highlighted miner accumulation as another potentially bullish indicator for Bitcoin. The on-chain analytics provider observed “a net reduction in compulsory sell-side pressure sourced from miners.” 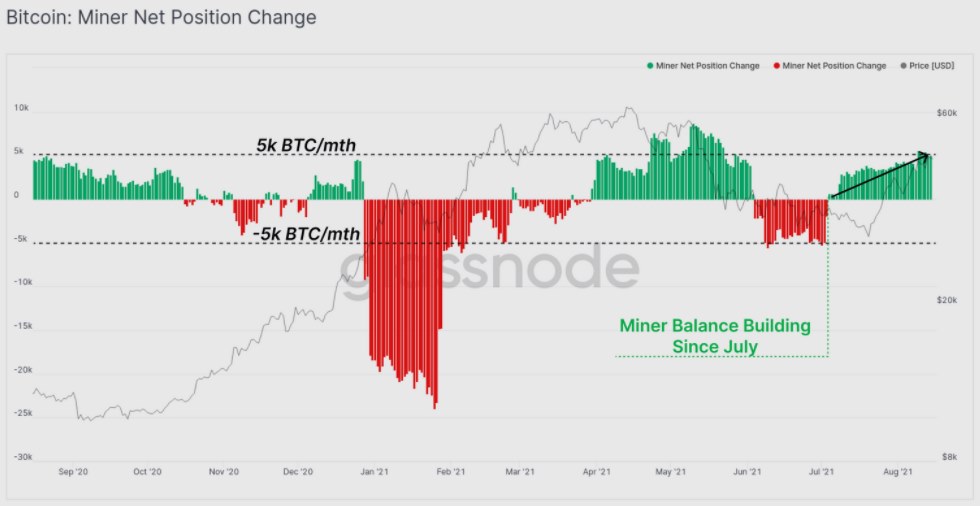 China’s crackdown on mining operations which began in May took a heavy toll on the Bitcoin hash rate, leading miners to close up shop and move to different cou with a more friendly stance towards crypto mining.

Glassnode said, “We have seen the net balance position of miners continue to increase over the last two months. The net growth of miner balances has now hit +5k BTC/month which demonstrates a net reduction in compulsory sell-side pressure sourced from miners.”

Related: BTC eyes $50K breakout despite most ‘greed’ since all-time highs: 5 things to watch in Bitcoin this week

According to crypto Twitter analyst Rekt Capital, $46,500 is an important level for BTC in the short-term. As seen above, the price action for BTC has resulted in the formation of an ascending triangle on the daily chart and the price needs to close above the $46,500 level in order to confirm a successful test of the triangle resistance.

A daily close above $46,500 would support the continuation of the uptrend whereas an ascending triangle breakdown could see Bitcoin price slide into the low $40,000 zone. The overall cryptocurrency market cap now stands at $2.007 trillion and Bitcoin’s dominance rate is 43.5%.