Not many traders are aware of this cryptocurrency, so we decided to share its history and price predictions that will either confirm NEO's attractiveness or proclaim its end.

NEO is a blockchain launched by Da Hongfei and Erik Zhang in China, in 2014, as the first Chinese public blockchain. In the beginning, the cryptocurrency was called Antshares but was renamed after three years. Fun fact: NEO is considered the Chinese Ethereum as both projects were founded to contribute to a smart economy. The idea behind the project is to create a community of developers and build an infrastructure that will support the network and lower entry barriers worldwide. Additionally, operators of the NEO ecosystem have created the EcoBoost project to encourage people in designing smart contracts and decentralised apps.

If you're familiar with cryptocurrencies, you know that a network usually develops one coin to provide its operations. NEO has two currencies: NEO and GAS, and they serve different purposes. NEO was launched for people to vote for blockchain improvements. On the other hand, GAS allows one to pay fees for transactions done on the NEO network.

The proof-of-stake principle allows traders to earn GAS using NEO by just keeping NEO in official wallets. If you deposit NEO into your wallet, you get GAS coins. During NEO's ICO, 50% of the tokens were sold, while the other 50% were shared among the NEO Council. The NEO project was designed as a "rapidly growing and developing" ecosystem. And it follows its aims. As a result, the NEO coin can be an attractive investment. Let's look at NEO's price movements.

NEO Price: What Affects Its Direction?

You won't find any NEO predictions that are 100% accurate. That's impossible to do as the world changes daily, and the price is subject to many factors. That's why you should know the events that affect the price direction to correct NEO price predictions relative to the current market situation.

The general trend of the cryptocurrency market affects the movements of each coin. To follow it, consider Bitcoin price moves as the leading crypto asset. If the medium- and long-term trends are bullish, NEO's price will likely rise, and vice versa.

How NEO Performed in the Past

Before considering price outlooks, we should investigate NEO's historical performance. First, it'll show us what factors affected the price in the past. Second, we'll be able to measure the price fluctuations to understand how far NEO may go. Though the project was launched in 2014, NEO's price has only been considered since 2017 because that's when it was renamed.

During the ICO in August 2017, the token was sold at $0.0320. However, on 15 January 2018, the price had already skyrocketed to $198.20 on Bitfinex. The overall cryptocurrency bullish trend caused a sharp increase. Imagine how lucky those who participated in the ICO were at that time!

The coin's current price is $24.43 on Bitfinex. However, the rate's decline isn't only related to NEO. Most cryptocurrencies have lost value since the beginning of 2018. 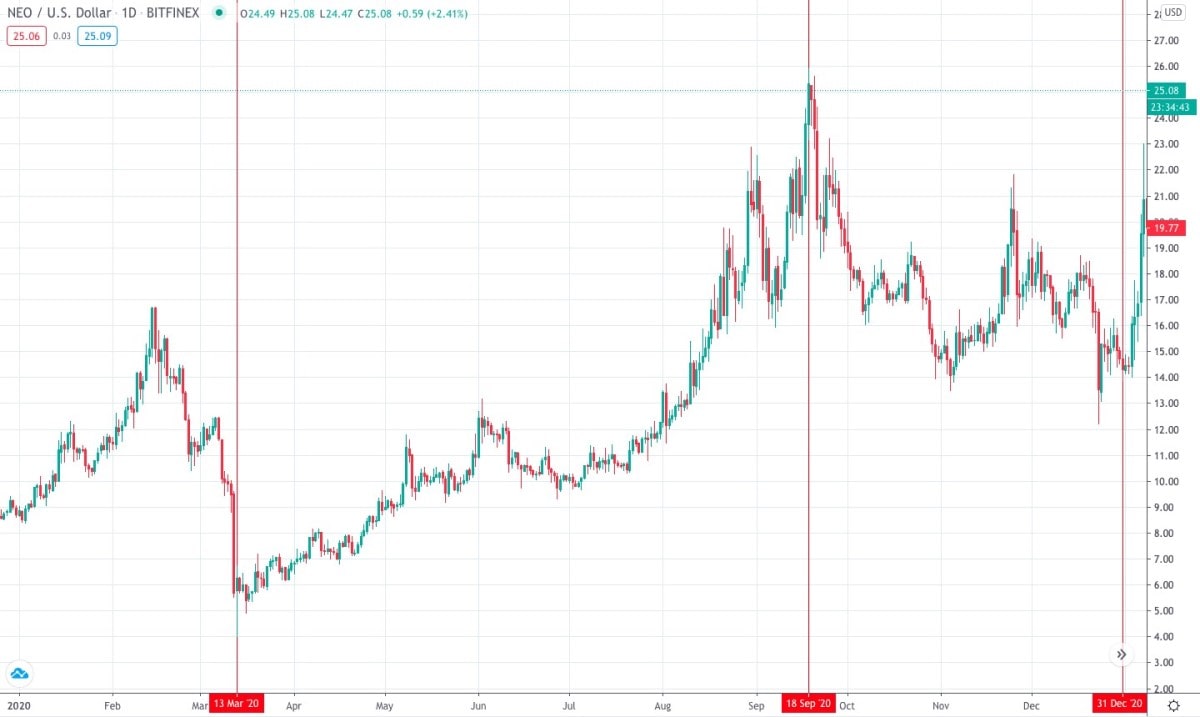 At the beginning of January 2020, the coin was below $10. In the middle of February, the price doubled. From mid-February to mid-March, the bearish trend pushed the price to $4 (13 March marked the year's lowest point). The next bullish trend started only in July and pushed the cryptocurrency to $25.90 as of 18 September. Then, the price moved down again and reached $14. Until the end of the year, it suffered ups and downs but finished 2020 near $14.

If we compare NEO/USD and BTC/USD's price movements, we'll see that NEO's price mostly repeats the major trend exhibited by the BTC/USD pair. It's not a surprise that cryptocurrencies usually follow the direction of BTC/USD, but we can still notice some differences in the pairs' directions. 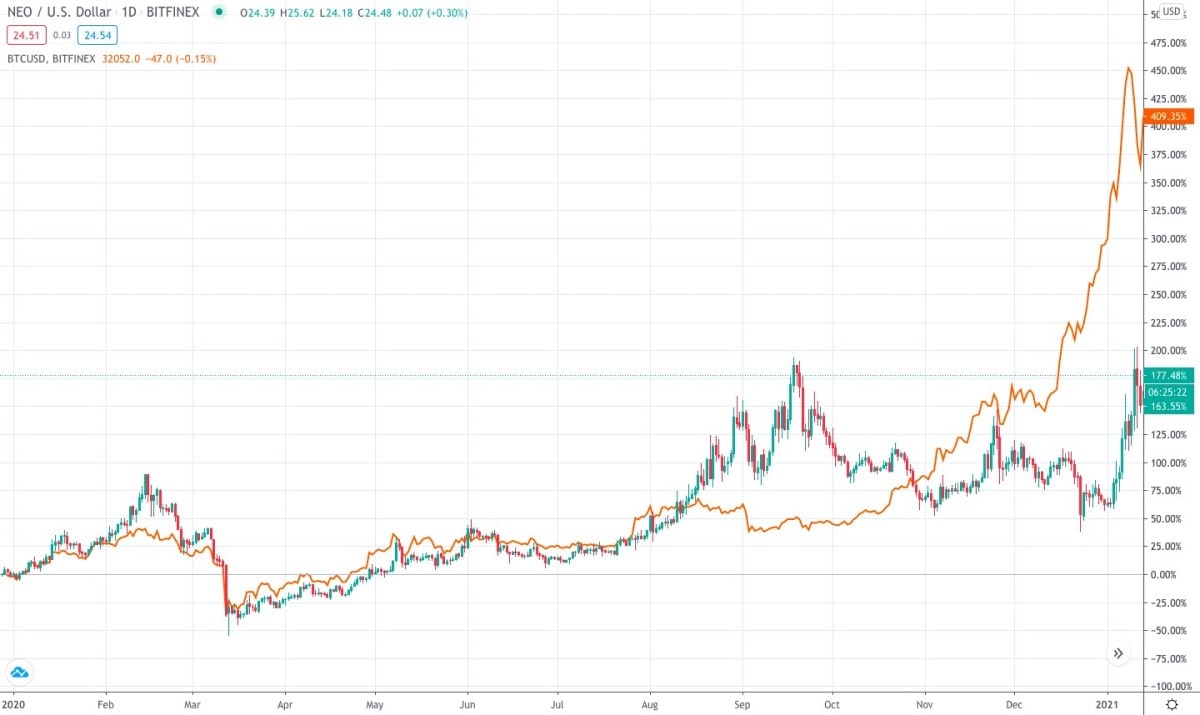 There was a bullish trend of NEO/USD from July to September 2020. At that time, BTC/USD was flat. Bitcoin's uptrend started in October, while NEO/USD suffered a bearish trend until November. Such differences usually happen due to the internal project's events. For example, at the end of July 2020, NEO created a partnership with the blockchain-based Services Network. BSN is a global infrastructure that creates a digital economy by offering a cheap platform for blockchain projects and similar companies.

You could notice that the price of NEO was highly volatile during the year; it jumped from $5 to $25, meaning that it may fluctuate significantly in upcoming years.

How Is NEO Doing Now? 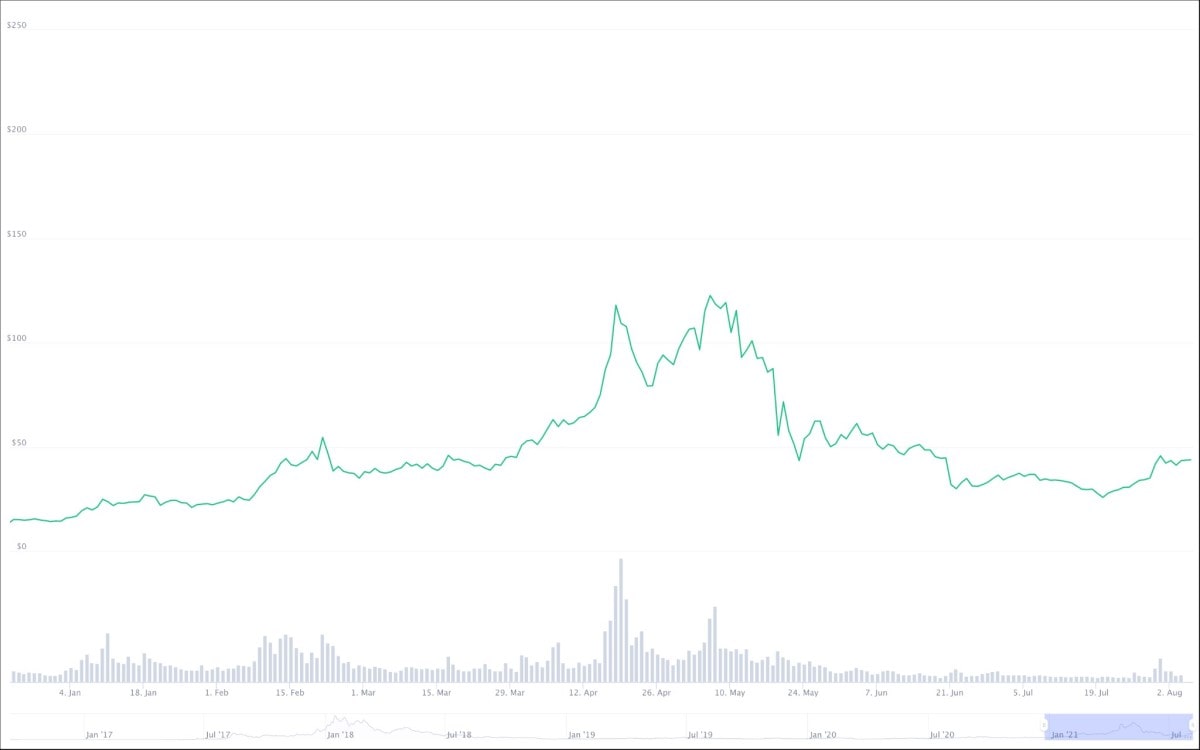 Over the course of summer, NEO declined in value. It was no longer trading over $100, and since mid-June, it hasn't been able to reach the $50 mark. The coin may recover, but it would take some big news from the project and an influx of trading volume. Currently, NEO ranks 34th on CoinMarketCap.

NEO can be considered an exciting investment. The project has been developing regularly. We expect a continuous increase in NEO's value. So, we recommend considering different experts' predictions to have a comprehensive picture of upcoming price movements.

Long Forecast sees a more volatile picture for the near future. Look at the table below.

If you're considering longer-term investments, check these forecasts.

The platform has more bearish predictions compared to other sources. The price will stay in the broad range of $75-$100.

It's unlikely the cryptocurrency will disappear after 2022. That's why we decided to consider long-term projections that will show you what you should do with the coin in two to four years.

Fast-forward to 2025, we have another prediction from Long Forecast, which isn't as promising this time.

Such forecasts are the most uncertain and complicated because the price of NEO is highly volatile. As plenty of factors affect its direction, all the projections are approximate and made just to show the future trend. Before using these forecasts, you should check the current price and apply technical and fundamental analysis.

According to CoinSwitch, cryptocurrency has excellent potential. The source believes the NEO community will increase significantly, as will its adoption ratio. There's a chance the coin will be among the top 10 digital currencies. By 2030, the cryptocurrency may skyrocket to new highs. In the end, NEO will cost $400, despite small losses.

Although you can use price forecasts of analysts and other traders, it's worth knowing how to predict the price direction using technical analysis. If you've ever done technical analysis of other securities such as fiat currencies and stocks, you'll succeed with cryptocurrency analysis. Here are several steps you should take:

It's essential to have NEO price predictions on the coin's price. But what about the thoughts of experts and investors about cryptocurrency?

As a total revamp of the current NEO blockchain, Neo3 is a robust implementation towards a digital asset platform that will provide high throughput, enhanced stability and security, an optimised smart contract system, and a feature-packed infrastructure set to empower developer adoption and accelerate enterprise-grade blockchain innovations".

Above, you can see the average forecast for NEO's price in the upcoming years. According to the predictions by famous crypto experts, NEO is an attractive investment. The NEO network is developing daily, meaning that the cryptocurrency will rise in value as the growth of the NEO community, an increase in the number of agreements and implementation of the system worldwide will raise its popularity.

Still, cryptocurrency is highly volatile. Its price can skyrocket from $2 to $50 within a month. If you consider NEO as a long-term investment, it may lead to losses in the future. The price changes significantly. So, if you buy it at a low price now, it doesn't mean that NEO will cost more when you want to sell it.

Another option is to trade NEO via CFD with Libertex. A CFD trading allows you to buy and sell a cryptocurrency anytime you want. You can potentially succeed no matter if the price goes up or down. Before you enter the real market, Libertex provides a demo account that gives you a chance to trade at the actual market conditions but with fake money and fake gains. Here, you'll master your trading strategies.

Let's sum up what you've learned from this article.