How many times have you heard that China is number one in mining? And that 80% hash rate is in China? Here is a recent example: “The Bitcoin hash chart showed the main distribution of shares between pools: F2Pool - 21.8%; AntPool - 16% and BTC.com - 15.1%. The last two companies are directly owned by the manufacturer of Bitmain miners, which means that the mining of blocks of the main cryptocurrency is controlled by 52% by two companies from China.” However, it is easy to find refutation even of this thesis:

That is, it seems that the authors of such materials have never mined themselves: even if theoretically all the equipment were in China, and its owners were not, then in this case it would be at least incorrect to state such a thesis, in fact it would be ruinous for reputation. But what is more interesting: we are talking specifically about pools, that is, by definition - joint entities. Yes, the majority still tends to identify something with someone, that is the residual effect of centralization, let’s call this phenomenon this way, but let's face it and ask ourselves simple questions:

And now there are some interesting aspects that for some reason rarely appear in mining research. Here is a map from the well-known resource bitnodes.io:

Doesn’t it confuse you?

China is great and powerful, but the nodes are only 2.03%. Why? The answer is simple - no one wants, and for a long time, to show their real face, therefore, in TOP-5:

But what about South America, Chile and Venezuela in the first place, Iran? All of a sudden, they seem to disconnect at once? To make the answers obvious, let's look at the following screenshot from Shodan’s: 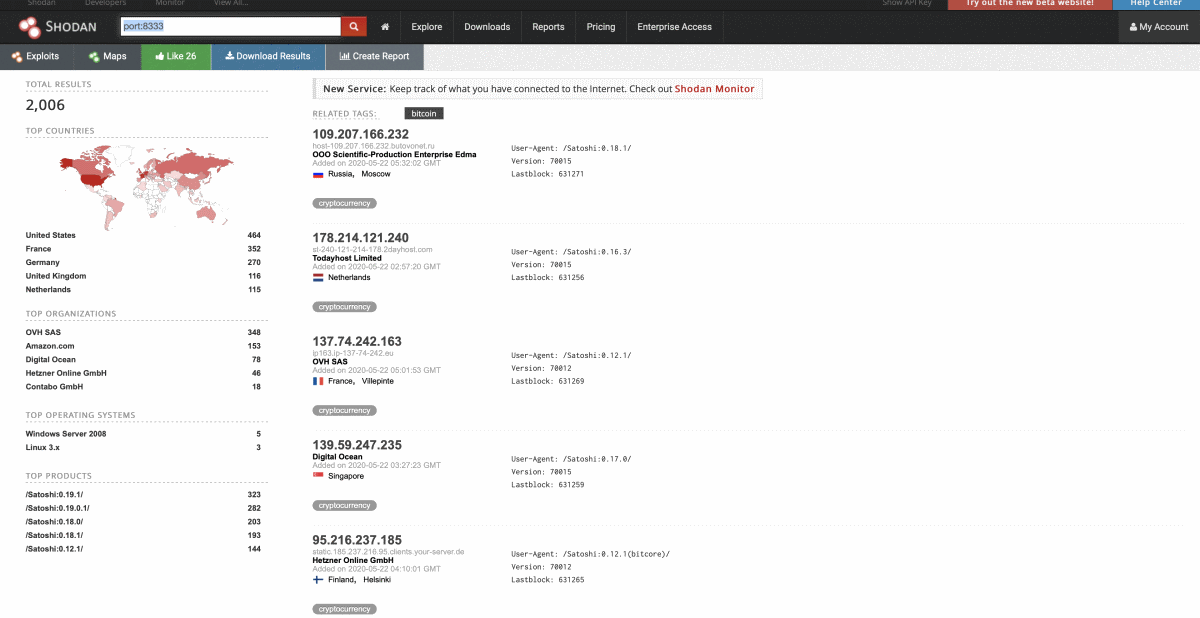 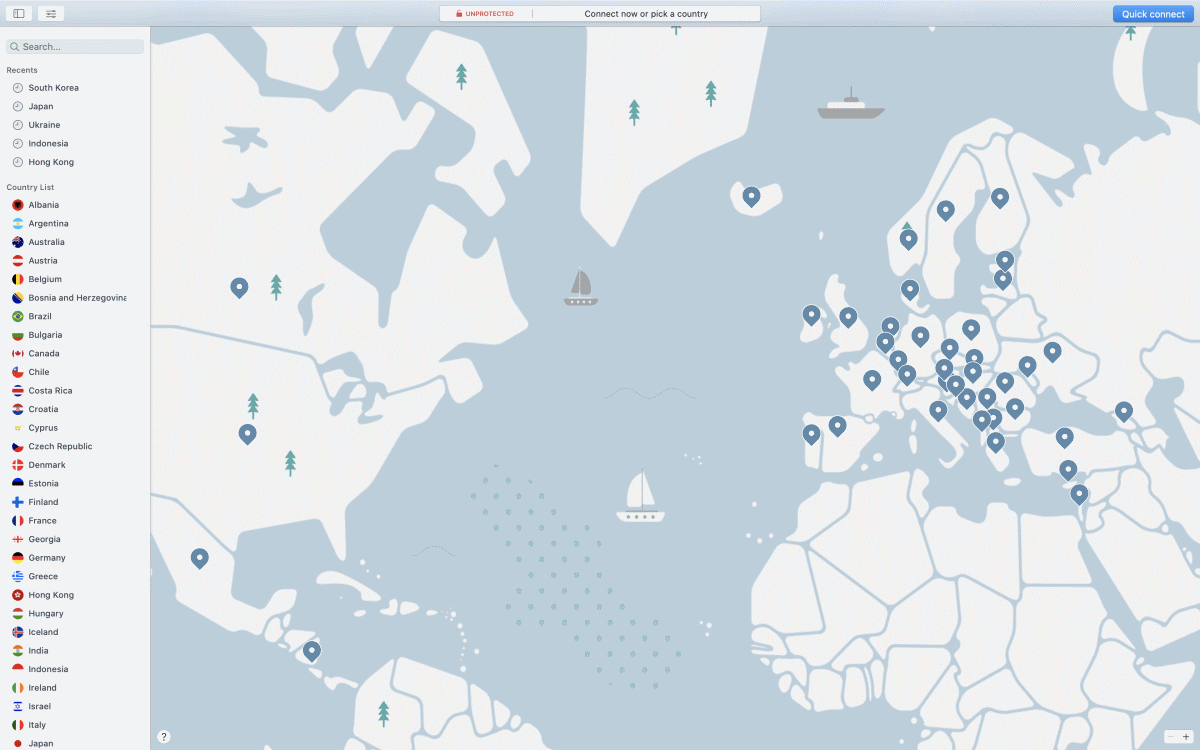 The correlation is obvious, isn't it? You can go further and see popular VPN zones, including those raised independently through SaaS: everything will become even simpler. We don’t know why, but few people want to admit this fact: VPN / PROXY in the broadest sense is one of many ways to get away from identifying the final hardware. Of course, the mining farm itself can be found: by noise, by energy consumption, by researching the hiring process, etc. But why simplify the task? Therefore, VPN-nodes (the name, of course, is conditional) became more popular, and let's take a look at some data:

Why are the total capacity and these providers so important?

The fact is that Amazon is featured here thanks to Amazon Web Services, exactly the same applies to OVH SAS, Digital Ocean, and Hetzner, but everyone knows about Alibaba: in other words, open nodes prefer to put SaaS solutions on both safer and more secure, and the choice of countries is obvious: all of them protect personal data more than others, just remember the GDPR in Europe and the USA, where the most stringent law on personal data in the world is adopted. No magic, it’ sheer safety.

That's all: neither distribution by pools, nor analysis of nodes will give 100% exact data, or even at least somehow accurately verified, regarding the differentiation of the hashrate in the Bitcoin network by geographical feature. But everyone, especially “experts”, never tire of repeating:

“In general, 80% of the computing power of Bitcoin and Ethereum is based in China.”

The feeling that they for a moment forget the laws of mathematics and statistics as well.

And here the power will help: firstly, we were not the first to pay attention that China is not the same as it was in 2017-2018, before and after solid anti PR media; secondly, Cambridge recently updated Bitcoin mining data and here is what they wrote: “geo-location data of hashers collected by mining pools provides an accurate picture of global hashrate location”.

First, it turns out that “the aggregate data from the pools participating in the project is approximately 37% of the total Bitcoin hash for the period from September 2019 to April 2020 inclusive. We use this data as approximate for understanding the geographical distribution of the Bitcoin common hash, assuming that they are representative of the general hash distribution. Then we are informed that with the exception of China, hash data is currently only available at the country level. We hope that in the future we will be able to add even more gradations by territory to better represent regions with significant activity, for example, Siberia in Russia, Washington and New York in the United States of America or Quebec and Albert in Canada.”

Simply put, these guys trust those who can’t be trusted: how dirty the game can be in China has been seen more than once on the example of Binance, Tron, pseudo-ICO and other projects. Why, then, did they all trust to miners, pools in the first place, who benefit from overstating the figures and substituting the facts?

It's funny that the guys say it themselves, but who hears them? Let’s quote: “The Bitcoin mining map is based on extrapolating a sample of data from pools. This sample may not be fully representative for the two reasons: first, it represents only a little over a third of the total hashrate; and secondly, the data is represented by three Bitcoin mining pools, all of which are headquartered in China.” Unexpected, isn't it? Not true.

But the last remark is much more important: “it’s not a secret for anyone - it turned out that it is - that miners in certain places use virtual private networks (VPNs) and proxy services to hide their location. This behavior can distort the overall geographical distribution and lead to an increase in hashrate in some provinces or countries. For one of the three pools, this effect is especially noticeable in the Chinese province of Zhejiang. "To mitigate this effect, the hashrate of Zhejiang was divided proportionally among the other Chinese provinces listed in the pool dataset." But with the distribution by country, obviously they did not do the same: what to add here?

To conclude this short essay, we’ll express the main idea: the blockchain community, by definition, can’t be based on trusted environments, this is already mentioned in the Bitcoin White Paper and this is the main advantage of the technology that everyone loves so much, so it's time to apply its principles in philosophy, both in business and in everyday practice.